The Philaesthetic Scene for Oct. 29 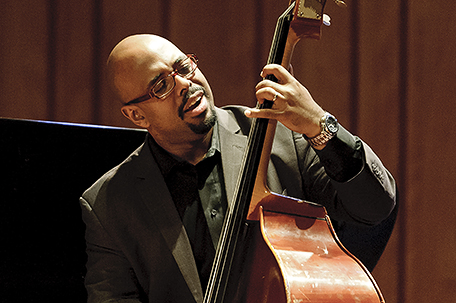 It is the end of October, which brings us to the Halloween Weekend which is  one of the busiest times for cultural activities in the City. This Halloween weekend is no exception as there is a veritable mix of cultural treats going on. They include a rare small club appearance by one of the giants of modern jazz music, a real live Brazilian costume party with an appropriate music soundtrack,  as well as a concert by some of Philadelphia’s Latino musicians. Whatever your tastes are, there is something for everyone on Halloween Week.

If anybody rightfully earned the current title of  the nation’s “King of Jazz,” it would be Philadelphia born bassist Christian McBride. For over 20 years, Christian worked to established himself as one of the premier bassists in modern jazz. He has accomplished that with perennial wins in the Bass Category of the Downbeat Magazine Critics’ and Readers’ Polls.

This year, McBride’s presence became more ubiquitous when he was named as the new Artistic Director of the Newport Jazz Festival. He also has two radio shows on NPR and Sirius XM, as well as a new Big Band CD “Bringin’ It,”  on Mack Avenue Records, which opened in the #1 spot on the “JazzWeek”charts.

This Saturday, McBride brings in a superb trio to assist him in his tribute to the Father of Modern Jazz Bass (and mentor) Ray Brown.  Rounding out the group are hard bop pianist Benny Green, who not only played under Betty Carter and Art Blakey, but also performed with the legendary Bassist Brown. Keeping time for the date will be veteran drummer Lewis Nash.

The sounds of Brazil  has been part of the US music scene since the 60’s, when Antonio Jobim and Sergio Mendes  made the “Bossa Nova” popular. However, that style, which is more cosmopolitan, is only a tiny part of the rich cultural mix that exists in Brazil. The rest of the population parties to funky street music which is heavy on percussion and based on Afro-Brazilian rhythms, funk, and even reggae. The Philadelphia ensemble PhillyBLOCO is perhaps the only group of its kind in the city which recreates the carnival atmosphere of a Rio/Bahia street party. The group starts off with base of 12, (count ‘em 12) percussionists, then adds  guitar, bass, a horn section, accordian, and even dancers.  PhillyBLOCO will bring the party to Ardmore Music Hall this Saturday to kick off Halloween right! In that spirit they want people to come in the costume of their choice. So for a truly memorable Halloween experience, come down to the Ardmore and be ready to samba until you sweat.

88 and Stevie Wonder. The one constant in all of our music is a heavy percussive element (12 drummers!) that we use to explore the tremendous range of Brazilian rhythms, applying our own unique creativity and energy to each arrangement

Modern Latin American music always had a strong political protest component to it. As a matter of fact, More than a few musicians have been imprisoned or lost their lives because the government had a problem with their political point of view. Taller Puertorriqueno will present a concert of Latin American protest song, which will feature compositions by a variety of famous composers from the region, including Puerto Rico’s Rafael Hernandez,  Chile’s Violta Parra and Victor Jara, and the great Brazilian singer Caetano Veloso. Performing this music will be a quartet of accomplished Philadelphia Latino performers, including singer Diana Saenz, pianist Suzzette Ortiz, Cuban singer Pavel Urkiza, and percussionist Christian Noguera. Taller Puertorriqueno sponsored this concert as part of an exhibition of new work by sculptor Miguel Antonio Horn. For those who like their visual art combined with music, Taller has served a cultural Halloween treat.

Ibeji is the Yoruba word for “twins,” and in the Yoruba-based religion of Ifa, twins play a significant role in the culture and cosmology. The religion came to the Western Hemisphere via the slave trade and is practiced mainly in Cuba, Brazil, as well as the US.  Sisters Lisa and Naomi  Diaz are the daughters of the late legendary Cuban percussion Master Miguel “Anga” Diaz. Inspired by their father’s legacy, they decided to perform the music of their father’s culture, which is a hauntingly seductive mix of  Afro-Cuban ritual music and modern sounds. Naomi plays percussive instruments, the Cajon and the Bata, which she coincidentally picked at the age of 11, right after her father passed, while Lisa plays piano.

Together the twins have learned the songs of their father’s culture, the Yoruba-based Lucumi.  Their first recording, the self-titled Ibeyi, contained songs which were  based in this idiom, including the hauntingly evocative “River,” an invocation to the orisha Oshun and which issued one of the best videos of 2015. They subsequently gained notice, which got them an cameo in Beyonce’s “Lemonade.”

This is the second appearance for the duo in Philly , which will surely to draw a mix of Yoruba devotees, as well as fans of modern Latin music.