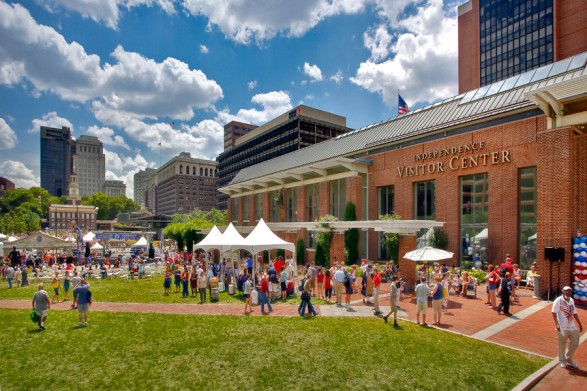 July 3, 2016 Category: Entertainment Posted by: Philadelphia Sun Staff
35 events with 350 performers and 100 hours of free family-friendly fun—through July 4th
Welcome America, Inc. formally announced the 2016 Wawa Welcome America! festival eight-day festival, presented by Comcast NBCUniversal.
Beginning Monday, June 27 and running through Monday, July 4, there have been events highlighting America’s Independence and celebrate everything Philadelphia from history to entertainment citywide. In 2016, visitors will see more live music than ever before with free performances from a wide range of artists including Tony Award-winning actor and recording artist, Leslie Odom Jr.
The festival features 35 events, 350 performers and 100 hours of fun in Center City and in the neighborhoods. All events are free and curated to be family-friendly and inclusive. Fifty-six Philadelphia partners have come together under the Wawa Welcome America! umbrella to offer events tied to Philadelphia’s celebration of our city’s history and the USA.
Through the combined assets of Comcast NBCUniversal, including multiple live broadcasts on NBC10 and Telemundo62, plus extensive content available on Xfinity On Demand, Philadelphians across the region will be able to experience the festivities on television and online like never before. The festival will be broadcast regionally on NBC10, Telemundo62, Cozi TV, TCN, and TeleXitos. Events will also be live-streamed on the NBC10 and Telemundo62 websites. Festival guides that will help residents and visitors navigate the events throughout the week will live on the NBC10 and Telemundo62 mobile apps.
What’s new in 2016:
• Three nights of jaw dropping free fireworks shows. The first two will occur at the Delaware River Waterfront on Friday, July 1 and Saturday, July 2 at 9:30 PM and a July 4th grand finale (starting earlier this year) at 10:00 PM, presented by Comcast NBCUniversal and Pyrotecnico.
• The City of Philadelphia’s Office of the City Representative will produce the July 4th Celebration of Freedom Ceremony at Independence Hall with a tribute “Everyday Heroes.” Philadelphia Mayor Jim Kenney will present a new award, the Philadelphia Magis Award (A Latin word meaning more or better).
• During the City’s Celebration of Freedom Ceremony on July 4 at 10 a.m. the Wawa Foundation will present The Wawa Foundation “Hero Award”, an honor given to non- profit organizations serving the greater Philadelphia area that assists others and helps to advance communities through preserving our freedom, protecting our safety, inspiring learning, and encouraging and empowering others to become better citizens and community members. $80,000 in financial grants will be awarded including a $50,000 grant to the finalist recognized during the Celebration of Freedom.
• Eight days of free museums for residents including The Barnes Foundation (courtesy of PECO), the National Constitution Center (2 free days courtesy of Wawa), the African American Museum in Philadelphia, the Ben Franklin Museum, Museum Without Walls, the National Museum of Jewish American History and the Rodin Museum.
• Seven free Philly @ the Movies screenings under the stars in neighborhoods across the city. Locations include: Franklin Square, Xfinity Live!, steps at Philadelphia Museum of Art, Penn’s Landing at Delaware River Waterfront, The Piazza at Schmidt’s, Tustin Recreation Center and a special movie preview experience.
• A very special free daytime family concert event on the 4th of July at Eakins Oval featuring performances by Kidz Bop Kids Live – the No. 1 Kid’s Album Artist in the U.S. – plus an opening DJ set and beatboxing with the kids with hip hop legend Biz Markie who has toured extensively as a fan favorite on the Yo Gabba Gabba Live Tour.
• A citywide simultaneous book reading held at all 54 Philadelphia Free Libraries as part of the Go 4th & Learn series, led by Mayor Jim Kenney. Children will also enjoy 10,000 free books, thanks to Duffy Books in Homes USA.
• Our Flag Unfurled Mural on Columbus Blvd. Rededication with Mural Arts and Philadelphia STYLE Magazine.
• A rousing Independence Day Parade featuring 4,000 marchers in Historic Philadelphia on July 4th
• A first-ever Meet Your Neighbors festival experience on July 4th
• Wawa will retain the exclusive title sponsor role through 2017 and new festival partners include Comcast NBCUniversal and an expanded partnership with Live Nation Philadelphia, Visit Philadelphia and the Philadelphia Convention and Visitors Bureau as tourism and convention partners.
• The new partnership with Comcast NBCUniversal will offer festival attendees a digital guide to all the festivities on the NBC10 and Telemundo62 mobile apps and live broadcast of the festival streamed on the NBC10 and Telemundo62 websites.
• For the first time in Welcome America Inc. history Telemundo62 will broadcast the festival live in Spanish.
Celebrity performances on the Benjamin Franklin Parkway will headline the largest free concert in America – the Wawa Welcome America July 4th Concert. The five-hour, non-stop live concert begins at an earlier time, 5 p.m., (with two more hours of continuous live music) cumulating with a massive fireworks display at 10:00 p.m. The celebration will be broadcasted live throughout the Philadelphia area on NBC10 and broadcasted for the first time in Spanish on Telemundo62.
Performers include:
• Leslie Odom Jr. – of the year’s breakout Broadway musical “Hamilton”. This Tony Award-winning actor and musician was raised in West Philadelphia and recently released a new album.
• Yazz the Greatest – star of Fox’s hit TV series “Empire”. This American actor and rapper was born in West Philadelphia.
• Brotherly Love – five-member a cappella group whose fame soared after their impromptu backstage performance for President Obama. All group members are all from Philadelphia.
• A high-energy celebration of the “Sound of Philadelphia” with a tribute to music icons Gamble & Huff with performances by The O’Jays, Harold Melvin’s Blue Notes and The Intruders with the Urban Guerrilla Orchestra.
• The Philly POPS return with “POPS on the Parkway” featuring the full a 65-piece orchestra and patriotic performances with Philadelphia-native guest vocalists, Broadway’s The Lion King’s, Allison Blackwell, and international Opera star Justin Hopkins.