Philadelphia’s own BlumBros have a story to tell 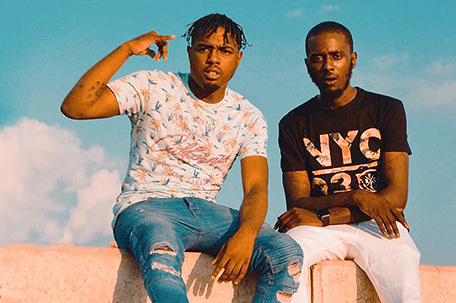 ABOVE PHOTO:  The BrumBros – Raphael and Cartier

Brothers Raphael and Cartier grew up in the Blumberg Projects in North Philadelphia. Born into a family of 11 children, they experienced a great deal of trauma at a young age. Raphael and Cartier were placed in foster care, separating them from their mother and each other for the majority of their young lives. After years in the system, they reconnected with each other as teenagers and found their way to creating music as a duo. The BlumBros sat down with the SUN to talk about their experiences in the foster care system and how they are using music as a testimony.

The journey through the foster care system left Raphael and Cartier feeling isolated, and longing to reconnect with family. Cartier spoke about reuniting with his brother.

“I had a kid when I was 16, so I felt like I was an adult for a long time,” said Cartier,  “I really didn’t have anybody.  I ran away from every foster care home I was in and they would have to come find me weeks later. I always ran to where my mom was. Once I reconnected with my family, it was a good feeling knowing I had blood that really cared about me vs. coming from the foster care system where they didn’t care about me at all.”

Eventually after reconnecting with one another, the brothers found a common bond in their love for music.

“I was attracted to music since I was 9 years old, but I was shy so I would always just sing to myself,” Raphael said. “I didn’t start taking it seriously until two years ago. We actually started working together because of our manager Todd Perry, who said we would make a great duo.” “I put out a single and it got a big reaction all over North Philly,” Cartier added. It was just me on the song, but my brother was in the video because he was on the adlib. At this point we still were not a group yet. There was buzzing in the neighborhood, and someone walked up to me and said, ‘I have some folks out in California that are really connected.’ I brushed it off because everyone was telling me that. He asked me to send him a link to the song and I never did. I saw him another time and he asked for the link again… so I sent it to him. He and my manager are cousins. After my manager listened to the song, and watched the video he wanted my cell phone number.”

That initial meeting led to the BlumBros accomplishing a great deal in just two years. The duo gained the attention of some heavy hitters in the music industry, and were signed to Ultra/Payday Records. Shortly there after, they were offered an opportunity to co-write the Philadelphia Union Soccer team’s theme song.

“We were signed as artists and writers,” Cartier said. “Originally, the soccer team wanted hooks from us… they just wanted us to write it. Raphi (Raphael) sounded so good on it, they turned it into a feature.”

Raphael and Cartier realized that through music they could do two things; live their dream and share their story. The brothers often spoke about their childhood on social media. Their story caught the attention of a Dateline NBC Correspondent, which eventually lead to a docu-series with Vice. Raphael spoke about the importance of sharing their story as a means of uplifting others.

“It’s not everyday that people get separated, make it through everything we’ve made it through, come back and reconnect with family, become a duo, make music and make a way for our family,” he said. “No one from our project has made it to Hollywood, or out of Philly period. People are asking ‘how did we make it out and how are we doing this?’ Our story is a story people really need to hear, especially people that went through the foster care system. When you hear BlumBros, we want to be the voice for foster kids and people that don’t really have a voice. We want to be living testimonies to tell people this could happen and it’s real.”

Raphael and Cartier describe their music as feel good music that will make people dance. The duo is currently working on their EP. In the meantime, they have music available on Apple Music and a number of other music platforms. Their first single from their upcoming EP will be entitled “Ur Wifey”. Stay tuned for more music from the BlumBros and their Vice docu-series coming soon.

To find out more about the BlumBros, follow them online on all social media platforms @blumbros and at their website www.blumbros.com.

Tips for turning history into your story

Philly’s The Blumbros: “Something’s Gotta Give”