Philadelphia’s music legacy is vast but hard to find 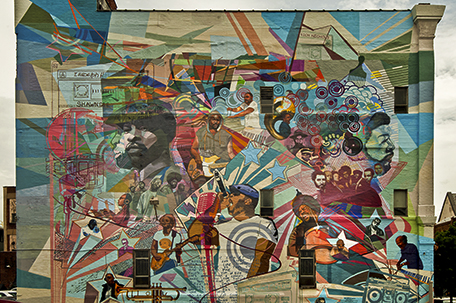 ABOVE PHOTO:  A project of the Philadelphia Mural Arts Program, Legendary pays tribute to Philadelphia’s own Grammy®-winning band The Roots, who have recorded more than a dozen albums and are the house band on Late Night with Jimmy Fallon. Located at Broad and South Streets, the mural isn’t far from the Philadelphia High School for Creative and Performing Arts, the alma mater of the band’s founders, Tarik “Black Thought” Trotter and Ahmir “Questlove” Thompson.  (Credit: Photo by R. Kennedy for Visit Philadelphia)

Detroit has the Motown Museum. Mississippi has a blues trail. Memphis has Graceland, Sun Studio and the Stax Museum of American Soul.

But in Philadelphia – birthplace of the lush acoustic style known as The Sound of Philadelphia and the hometown of “American Bandstand” and Chubby Checker’s “Twist” – there’s no major place of pilgrimage for music fans.

“Tourists come here expecting and hoping to experience our music legacy, and we leave them wanting,” said Patty Wilson Aden, president of The African American Museum.

But there’s been no effort to paint a larger picture of a vibrant musical landscape that has included Patti LaBelle, Bobby Rydell, Fabian, Hall & Oates, Boyz II Men, the Dead Milkmen, Jill Scott and The Roots and John Coltrane.

“It does hurt a little bit that we don’t have (a museum) when we are one of the strongest cities musically,” said Nate Morris, a founding member of Boyz II Men.

Part of the problem, says Temple University history professor Bryant Simon, “is the diversity of the sounds. They don’t lend themselves to coherence like Nashville or Motown. Which story would you tell?”

Philadelphia was one of three finalists for the Rock and Roll Hall of Fame but lost out to Cleveland. Music promoter Larry Magid, who brought the Live Aid concert to Philly in 1985 and booked shows at the storied Electric Factory venue, was involved in the failed effort to locate the Rock Hall here. Over the years he’s tried to rekindle the idea of a Philly music museum but funding has proven elusive.

“It’s not about a piano or a gold record or a piece of clothing,” he said. “It’s asking why did all these talented people come out of Philadelphia? How did it work?” 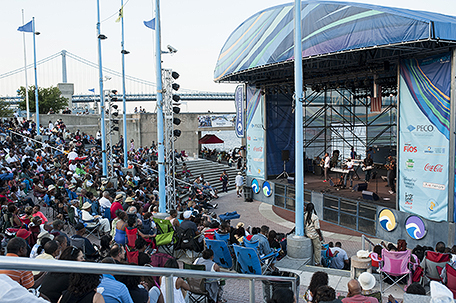 This summertime favorite brings the cool sounds of smooth jazz to Philadelphia’s waterfront. Open to jazz fans of all ages, the free outdoor concerts happen every Friday night in August on the RiverStage at the Great Plaza at Penn’s Landing.

Many touchstones in the city’s musical landscape have been torn down, burned down or turned into apartments and businesses. Others are in distant or rough parts of the city that see little tourism or business.

Kenny Gamble and Leon Huff’s Philadelphia International Records, home of musicians like Teddy Pendergrass, Lou Rawls and the O’Jays, offered tours and a small gift shop before an arsonist nearly burned the place down in 2010. Before they bought the building in 1970, it was home to Cameo Parkway Records, where Chubby Checker recorded the “The Twist” and Dee Dee Sharp recorded “Mashed Potato Time.”

A hotel and residence is now planned for that site. But the vision of a museum honoring The Sound of Philadelphia – which Gamble, Huff and Thom Bell created – is still alive, according to Chuck Gamble, Kenny Gamble’s nephew. Most of the studio’s memorabilia was saved from the fire and could be displayed. “Philadelphia needs the same kind of attention that Memphis gets and Detroit gets,” he said.

He’s working with the R & B Hall of Fame – a virtual hall of fame that has inducted over 100 artists – to bring the hall’s annual induction ceremony to Philadelphia in 2018. The hope is to build interest and perhaps establish a joint museum one day, he said.

The Uptown Theater is one of Philly’s last remaining historic theaters, part of the “Chitlin Circuit” that featured Black performers over much of the 20th century. “Everybody who was anybody played at the Uptown,” said Simon, whose courses at Temple included one about the Uptown. “Ray Charles, James Brown, Miles Davis, famous Black comedians, all the Motown acts, all the Atlantic (Records) acts, all the Philly International acts.”

Linda Richardson has spent 25 years saving the Art Deco theater and bringing it back to life, along with the surrounding community near Temple. She’d like to raise money to renovate it and find “an impresario” to run the entertainment side. “We used to have tour buses come past and stop but it didn’t give them a flavor and wasn’t bringing any revenue,” she said. 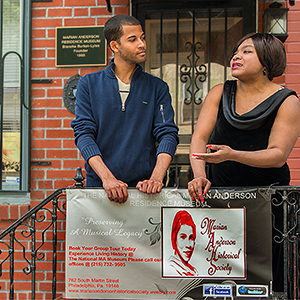 The simplicity of the Marian Anderson Residence Museum in Philadelphia belies the extraordinary accomplishments of the celebrated contralto during her lifetime. Every room of the modest childhood home contains personal items, musical mementos, artifacts and documents that highlight Anderson’s legacy as an artist and civil rights pioneer.

Music tourism has taken off in cities like Detroit and Memphis and even in the Mississippi Delta, birthplace of the blues.

At the Motown Museum – located in the house of the label’s founder, Berry Gordy – visitors glimpse the sofa where Marvin Gaye napped and the candy machine Stevie Wonder memorized the buttons for. They even learn the steps to “My Girl” in the studio where The Temptations recorded it. Motown Museum CEO Robin Terry says some 75,000 people visit annually.

In Memphis, Elvis Presley’s mansion, Graceland, became a tourist magnet after opening to the public in 1982. That spurred revitalization of a stretch of clubs and restaurants on Beale Street. Two historic recording studios, Sun and Stax, also opened for tours. Today Memphis is a major destination for music fans from around the world.

“Philadelphia is such a great city with a strong musical legacy similar to Detroit, New Orleans, Liverpool and Memphis,” said Regena Bearden, chief marketing officer of the Memphis Convention & Visitors Bureau. “All are still influencing artists today. I know these projects can be challenging to get done but Memphis is living evidence of how important it is to cherish, promote and support the legacy as well as the musicians making music today.”

She added: “The Liberty Bell is a great symbol and a nice photo op, but it doesn’t make you dance.”