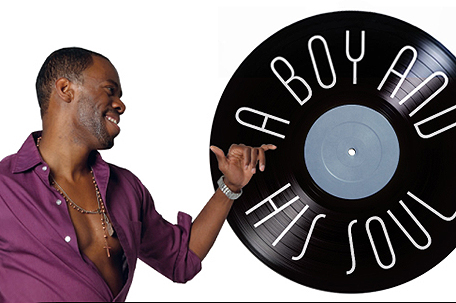 Previews begin Friday, May 23 with Opening Night on Wednesday, May 28.  Performances run Tuesdays through Sundays until June 22.  Tickets starting at $25 are available by calling the PTC Box Office at 215-985-0420 or visiting PhiladelphiaTheatreCompany.org.

“A Boy and His Soul” is a coming-of-age story following Philadelphian Colman Domingo’s upbringing through a box of vinyl records discovered decades later in his West Philly boyhood home. A one-man tour de force, the play with music digs deep into the joys and pains of his working-class background, and a pivotal moment in 1980s Philadelphia. This triumphant work features tunes by Stevie Wonder, Aretha Franklin, The Stylistics, Donna Summer, and others as the soundtrack to one man’s soulful journey.

“A Boy and His Soul” received its world premiere at Thick Description in San Francisco in 2005, with a subsequent sold-out revival production in honor of Tick Description’s 20th Anniversary in 2008.  After a sold-out one-night-only event at Joe’s Pub at The Public Theatre, A Boy and His Soul opened The Vineyard Theater’s 2009 season.  Domingo’s performance earned him Lucille Lortel and GLAAD Media Awards and nominations for the Drama Desk, Drama League, and Audelco Awards.  Domingo also wrote Wild with Happy which opened the 2012 season at the Public Theatre and had its west coast premiere at TheatreWorks in Palo Alto, CA.

Domingo, who grew up in Philadelphia and graduated from Temple University, appeared on Broadway in the original production of “The Scottsboro Boys,” earning a Tony Award nomination for Best Featured Performer in a Musical and a Fred Astaire nomination for Best Principal Dancer.  He recently reprised the role in London where he received an Olivier (the UK equivalent to the Tony Award) nomination for Best Supporting Actor in a Musical as well as the What’s on Stage nomination for Best Supporting Actor in a Musical.  His performance in the world premiere of “Passing Strange” at Berkeley Repertory Theatre won him a Bay Area Critics Circle Award, and his reprisal of the role Off-Broadway won an OBIE Award.  Domingo has also starred on Broadway in the Tony Award-winning revival of Chicago.  Regionally he has performed at American Conservatory Theatre, the Guthrie Theatre, Huntington Theatre Company, Geva Theatre Center, and San Francisco Shakespeare Festival, among others. His film credits include co-starring roles in Lincoln and The Butler as well as roles in All Is Bright, Hairbrained, and Red Hook Summer.  On television he was seen for two seasons in Logo TV’s “The Big Gay Sketch Show” as well as “Law & Order” and “Nash Bridges.”