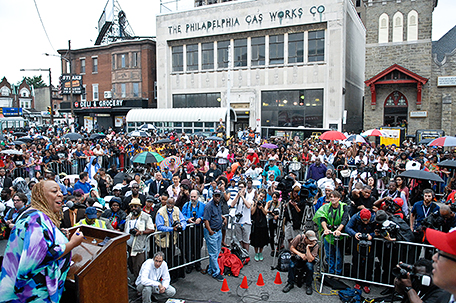 Kevin Hart has been a Philadelphia favorite since the inception of his comedy career. Hart has seamlessly bridged the gap between local stand-up comedian and international movie star. After numerous sold-out shows, worldwide tours, and blockbuster film successes, North Philadelphia’s Hart has become one of the highest paid comedians in the world. 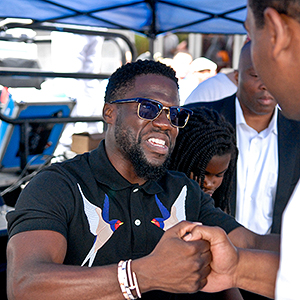 Now he has a few other accomplishments worthy of  celebrating. Muralist Willis “Nomo” Humphrey and Jane Golden, Executive Director of Mural Arts Philadelphia, joined forces for a portrait mural on the side of Max’s Cheesesteaks commemorated in Hart’s honor. Hart’s favorite cheesesteak spot, Max’s, was also the location of choice to celebrate on July 6th, which Philly has officially renamed Kevin Hart Day.

Germantown and Erie Avenue were blocked off for essentially a huge block party. Many from the neighborhood and the rest of the city gathered and beamed with pride Hart’s accomplishments. He is our hometown success story. 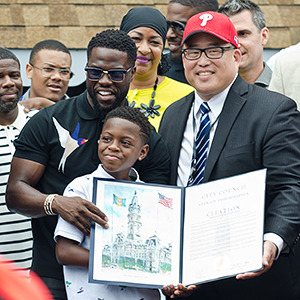 Artists Chill Moody and Freeway performed to a substantial crowd whose excitement for Hart wasn’t dampened by the scattered showers. After numerous gifts and program announcements by Quincy Harris of The Q Show, City Representative Sheila Hess, and City Councilpersons, Hart took the stage to say a few words.

He spoke about the love he has for his North Philadelphia neighborhood, just blocks away from Max’s, and thanked his fans for their unwavering support. He thanked his wife, brother, father and children all in attendance, and asked his children to join him onstage. His son conceded, while his daughter politely declined, choosing to remain out of the spotlight. He sarcastically thanked her for embarrassing him on his big day… the crowd erupted in laughter.

His son asked the crowd to do a call and response of Kevin’s famous “alright, alright, alright” a catchphrase in honor of his grandfather, the crowd gladly participated. Hart finished his speech with words of encouragement, and urged the crowd to shoot for the stars, while never giving up on their dreams. His final words were a request to keep his mural graffiti free for at least a month so he could enjoy it!

This is certainly not the last we’ll be seeing of Kevin Hart, on the big screen or in person. His newest film “Jumanji: Welcome to the Jungle” hits theaters nationwide December of this year. In the meantime be sure to visit Max’s, purchase the steak of your choice, and look up to see Kevin Hart front and center.