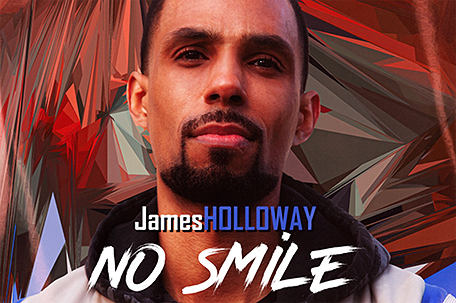 Born in West Oak Lane, James Holloway always had a knack for the creative. He grew up with a love for performing, which eventually led to a multifaceted career in the arts and entertainment.  After studying and earning his Master’s in classical acting from the London Academy of Music and Dramatic Art (LAMDA), he went on to pursue his love for performance landing roles on TV shows such as “Law & Order SVU,” “Grey’s Anatomy” (under the direction of Debbie Allen), “The Newsroom” and “Sam & Cat.” His roles in theater earned him the BroadwayWorld award for “Best Featured Actor” for his performance in “Broken Fences” as well as a nomination for an Audelco Award for his role in “Separate and Equal.” Holloway is now embarking on yet another aspect of entertainment with his first solo project “No Smile.” Holloway spoke to the SUN about his newest chapter.

Like many creatives, Holloway discovered his love for performance early in life.

“I have a cousin who’s a writer,” he said. “I have a very vivid memory of me dancing coming down the stairs at my grandmother’s home when I was 3-years-old. I guess to my cousin, I was dancing in a way that not an average three-year-old would. She said on the spot, ‘He is a natural born performer.’ I would continue to hear comments and compliments like that about myself throughout life.”

“When I watched television, I could see myself doing things like that,” Holloway added. “When I was taken to plays, I wanted to be on the stage. I was so inspired by what I saw. I felt like I could do the same things. I wanted to impact people and make them feel the same way I felt. I finally put it together… I realized my first love was the act of performance.”

Although Holloway has collaborated on a number of music projects, including writing rap songs for a piece by Pulitzer Prize winning playwright Lynn Nottage, this is his first time stepping out as an official solo recording artist. In true full circle moment fashion, Holloway met the London producer, Dino Kararic aka DinoSounds who worked with him on his debut project, on his very first day in London.

“I’ve written songs for other people in the past, but this was the perfect opportunity for me to showcase myself. I called up friends and asked who wanted to work with me. Dino was the perfect fit”, Holloway said. “Then I asked friends what mics I should use and bought the equipment that I needed to set up at home. I recorded in my kitchen which has the best acoustics in my pad. I recorded my vocals on my iPhone.”

The rollercoaster known as 2020 has made functioning on any level a challenge for many. Holloway shared his process for maintaining his ability to create in the midst of the heaviness of this year.

“It’s the pandemic and I’m an actor,” he said. “There’s no theater, and there was no film and television when the shutdown first happened. It felt like writing was the only thing to do to channel my desire to create and put something in the world… to contribute. The thing about writing music is that it was my opportunity to perform. I had to perform at the microphone and now I’m able to share that performance. This is my show right now. This was my shot at being able to continue my performance in the midst of all the catastrophes and heartaches that we’ve had this year.”

Released on December 18, “No Smile” was birthed in part thanks to encouraging words from a college friend. The single also serves as a reminder to always seek light especially when surrounded by darkness.

“If you listen to the song, it’s lighter,” Holloway said. “I have other material that touches on things that have more depth, but I think it’s important to find some light in the midst of all this heaviness. I’ve lost loved ones this year and it’s frightful. I’m grateful [that] I have a newborn and there are other things that I’ve discovered about this year. I just want to make sure that I still show up as positive as I can against any of the negativities that we’ve been facing.”

At first listen, one might think “No Smile” is just a party song, however, Holloway explained a hidden message.

“In the second verse, in the story we get pulled over,” he explained. “So, I subtly address some things we all know have happened in our society and are still happening. They got pulled over, but they made it out alive… it didn’t ruin the fun of the night.We’re going to keep having fun as much as we can. With this song, I also wanted to say who I am, shout out[to] Philly and let people know that sometimes it’s just about being cool, smooth and sexy.”

In addition to “No Smile,” be on the lookout for Holloway’s screenplay “Real Men,” currently in the development stage. “Real Men” tells the story of three best friends from Philadelphia who attempt to help save a member of the trio’s marriage. Be sure to follow Holloway on social media at: @jameshollowayofficial. “No Smile” is available for download at: https://distrokid.com/hyperfollow/jamesholloway/no-smile-2.

Guest Commentary: A smile is both contagious and healthy