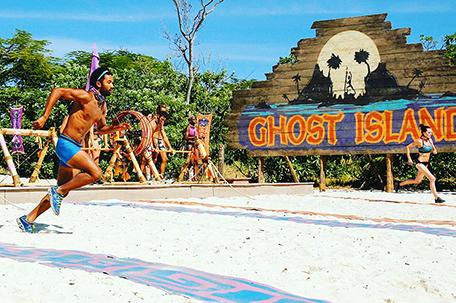 CBS’s popular “Survivor” reality series returned for its 36th season as “Survivor: Ghost Island.”  Premiering on February 28th, 20 castaways competed for the title of sole survivor in the Mamanuca Islands in Fiji. One of those castaways was Philadelphia local Wendell Holland II.

A superfan of “Survivor” for years, Holland sent in numerous videos and attended several casting calls. His charm and dedication caught the attention of producers, eventually earning him a place on the show. Holland’s tenacity, strategy and people skills not only landed him on the show, but on May 23rd, he won “Survivor: Ghost Island.” Holland sat down with the SUN to talk about his historic victory and life after the show.

A graduate of Morehouse College and the University of Pennsylvania Law School, Holland has always been driven and accomplished. He made the switch from a career in law to feed his creative passion by founding Beve Unlimited. Beve Unlimited is a furniture company that transforms reclaimed wood into unique custom creations. As founder and chief designer of Beve Unlimited, Holland was living his dream. He then decided to pursue yet another one of his dreams… becoming a contestant on “Survivor.”

“I’ve been a fan since season 18 and now it’s season 36,” Holland said. “I’m kind of outdoorsy, though I’ve never gone camping or anything. But, I know how to build using very raw materials. I’ve built tree houses and bike trails in my parents’ backyard. I’m also kind of social and I’m kind of smart — I have all these ‘kind of’s.’ I’m not the smartest or the most athletic or the most anything, but ‘I’m kind of’ good at all these random things, and that’s very helpful on a show like “Survivor.” You need to be good at a lot of different things to win challenges, and you have to be social and deal with people from every walk of life.”

After producers flew him out to Los Angeles for the final casting of “Survivor: Ghost Island,” Holland prevailed throughout several rounds of eliminations. A true test of  his patience was after he returned from final casting. It took about two months before he got the call that he actually made the show. He was then given about two months to prepare.

“I’ve been a pescatarian for a while also and I wanted to try eating meat again to prepare for the show,” Holland continued. “If I were to win a food reward, I would want to eat whatever I could to combat the starvation. Luckily, I won a couple food rewards –when you’re on the show, you’re really starving, so you must take advantage when you win some food. To start the game, we were only given a small amount of rice and whatever coconuts we could find around the island.I didn’t want me being a pescatarian to affect me winning a million dollars, so I changed my diet before going out there.”

Holland lost 26 pounds while participating in the show and admitted that food deprivation began to affect his mental sharpness.  The hardships that come with a game like “Survivor” are not reserved only for the physical and mental strain it puts on the body, but also the emotional toll it takes. Holland who is extremely close to his family, spoke about some of those challenges.

“There were so many extremely challenging things,” he said. “Being away from my family… I’ve been to summer camps, I’ve been abroad, I’ve been to college, so I’ve been away from them. But, under these circumstances I don’t know what’s going on back home. I can’t contact them, I can’t just call or send them a photo, and that was very tough.”

Holland’s closeness with his family also impacted the choices he made throughout the competition in terms of his strategy.

“I wanted to go out there and be me”” he said. “I wanted to represent well for myself, my family, Philadelphia, and my community. I have a very tight family, I respect my parents, I love my mother, I love my sisters. My little sister just had twin babies two years ago and maybe when they are old enough they will be able to rewatch my season. I have young cousins that watch my season — I have people looking at me. I know that TV doesn’t always portray the Black America that I know so I wanted to represent well for us.”

Holland’s tactics paid off in a big way, not only with a win, but by making “Survivor” history with the show’s first ever tie.

“After the jury casts their vote to see who’s going to win, Jeff (Probst) came back out with the urn and said ‘I’ll read the votes,’”he said. “We’re like ‘he’s just joking,’ because sometimes Jeff would joke with us just to lighten the mood. Then he starts reading the votes… Domenick (Abbate), Wendell, Domenick, and I were like ‘oh my goodness, this is about to be a tie!’ All three of us knew what breaks the tie in the event of a tie, though it had never happened before they actually announced the rule a few seasons ago. The third person in the final three casts the tie-breaking vote.

So, knowing that Laurel (Johnson) will be the tie-breaker, I’m overjoyed. Her and I had been so close all season, and I just knew she’d vote for me. So, as she walks back to cast the vote, I’m slightly smiling, I’m trying to cover my face, and my eyes are starting to tear up. After tribal is done, Laurel comes up to me and gives me a big hug and I just knew what it was. I just felt that she took care of me.”

“I got back home and there was about a 10-month-gap between us finishing in Fiji and them airing our finale,” Holland continued. “Ultimately, you don’t really really know until you’re sitting there in LA and Jeff reads that final vote,and when he read my name at the live reunion I was ecstatic! My boys ran up on stage, my family came up and gave me the best hugs ever.”

Holland brought in the victory surrounded by his family and close friends. After winning the competition and the cash prize, he reflected on the experience overall.

“I feel great about the experience… it was the greatest experience of my life and I would do it again!” he said. “Domenick, Laurel and I all made it to the end. We had a really tight bond very early in the show and you don’t always see those tight bonds making it to the end. I couldn’t have written a better outcome! The person I beat, Domenick, is such a good player, and I was able to edge him out with one vote at the end. As much as I thought I could do it even in my audition tape I said, put me on “Survivor” and I’m going to win… but everyone probably says that. But I actually did it on my first try. And, there has never been a tie in “Survivor”… so we made history… I am in the history books!”

Life after winning “Survivor: Ghost Island” consists of Holland balancing his love for creating furniture, public speaking, family life, and his desire to give back to the youth.

“I enjoy talking to kids, I enjoy talking to people… I’m a people person,” he said. “I need to be around people, interacting, talking, motivating children and speaking at schools. I feel like we have to teach these kids and raise them the right way. If they see somebody that followed his dream and broke through barriers… someone who did well in college and law school, but decided to follow a dream and became successful… maybe that’ll push them to follow their dreams.”

In addition to making appearances and speaking to youth throughout the U.S., Holland will return to St. Elizabeth’s Parish in Jamaica for the fifth year as a coach with the Philadelphia Men’s Basketball League (PMBL). The organization teaches life skills and leadership through basketball, one of Holland’s favorite sports. PMBL has raised $50,000 annually for food, jerseys, sneakers, water, and campers’ transportation. For more information on the camp and to support their efforts, visit: www.gofundme.com/pmbljamaica.

Wendell Holland has proven himself to be a survivor. Great things will continue to line his path. You can  the Beve Unlimited catalog at www.instagram.com/beveunlimited. For product inquiries, email [email protected] For booking inquiries and to follow Wendell’s personal journey visit www.wendellholland.com.