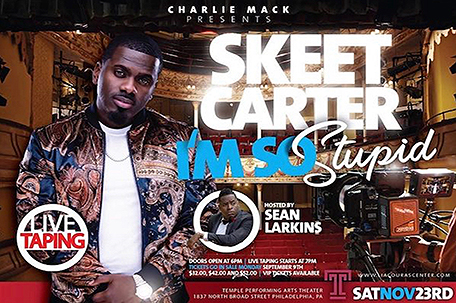 Philadelphia is known for its burgeoning pool of talent. Patti LaBelle, Will Smith and comedian Kevin Hart are just some of the people adding to the pride of Philadelphia’s legacy.

Another blossoming talent Philadelphia — and the world — should get to know is comedian Israel “Skeet” Carter.  After years of carving his own lane in the entertainment world, Carter will tape his first stand-up comedy special, “I’m So Stupid,” live. Carter spoke with The SUN about customizing his own path to success.

Born and raised in North Philadelphia, Carter had a successful career as a barber. He did not consider a career in comedy  until discovering he was going to be a father. The news acted as a catalyst for Carter to focus on a gift he previously shared only with friends and family.

“I was the class clown and I found humor in everything in my life, but I didn’t know that I had a love for comedy until 8 years ago,” he said. “As a barber, a lot of people would come to the barber shop just to hang with me… not to get their hair cut, just because they said I was funny. Everyone was telling me to try it and I needed to take something serious. I didn’t have a career path;  I didn’t know what I wanted to do. I was cutting hair at the time, which was enough money for me, but it wasn’t enough to raise a family.”

As fate would have it, Carter was cutting hair at the same barber shop as Kevin Hart’s brother. A number of patrons who were familiar with the then up and coming Kevin Hart  mentioned the similarities between the two.

With confidence in his own ability, Carter took that compliment to heart, and decided to take the stage by storm.

“I started taking comedy seriously in 2011, and I found a love for it,” he said. “Once I got that response from me performing on stage, I said ‘I could get used to this.’ The past few years have been magnificent, and I just want to continue to see how high I can go with it.”

Not one to follow the rules, Carter devised a plan for success by taking an unconventional approach.

“Back in the day you had to do Def Jam or Comic View,” he said. “Now, social media is your tv channel. If you can get someone to watch, that’s half the battle. My start was different from a lot of people’s. A lot of people in comedy start off by doing open mics. I never wanted to have to wait on somebody to tell me yes, or hear someone tell me no.”

“I rented out a venue for my first comedy show at 8th and Callowhill at 3238 and put on my own comedy show,” he continued. “I wanted to book some funny comedians. I found a few people that were really good — Malcolm Hill, Pretty Smiles — and Sugarbear was my host. Normally on a first show, on an open night I would go first; instead I put those seasoned comedians first and headlined my own show. The word got out.”

Carter went on to perform at 40/40 Club in Atlantic City and Hibachi on Delaware Avenue as he continued to build relationships and a following. After taking his comedy on the road doing features for other comedians, Carter finally got his big break.

“As the years went on, I got with a comedian and actress named Cocoa Brown ,” he said. :She asked me to feature for her one night in Connecticut. After the show, she asked me to clear my schedule for the rest of the year and tour with her. That was my entry into performing at all of the comedy clubs, and it was because of Cocoa Brown.”

“Every year I have a goal of what I want to accomplish,” he said. “One of my goals was to perform at every comedy club in the country. Another goal was to get a monthly comedy show in my city. I was the first comedian to have a contract with Live Nation at Punchline Philly which I had for two years. My new goal was to perform at a theater.”

“So now, I’m at a theater that holds 1,200 people,” he continued. “My manager and I talked and [he] said ‘we have to film your special. We have something to offer. If we can package it and film it independently, we can show the world what we’re capable of.’ This comedy special will separate me from just being an up and coming comic. It will solidify my spot in stand-up comedy history.”

Carter met Philadelphia’s own Charlie Mack three years ago. After having a rare off performance in front of Mack and some influential movers and shakers, Carter was forced to go back to the drawing board to improve his show. Carter’s unwavering belief in his superpower — laughter — made Mack and the same group give Carter a second chance. They were thoroughly impressed. The second performance lead to Mack becoming Carter’s manager and their partnership on his first comedy special.

Carter described what audiences can look forward to experiencing at his special.

“I take things from my point of view and make them funny,” he said. “I take my life story and my family’s story so anyone that’s human can relate.”

Carter also made this promise to audiences.

“If you see my show, I can make you put me in your top ten of comedians!” he said.

Be sure to follow Skeet Carter on social media @comedianskeetcarter. The live taping of Carter’s comedy special “I’m So Stupid” will take place on Saturday, November 23, 2019 at the Temple Performing Arts Center located at 1837 North Broad Street.

Hosted by fellow comedian Sean Larkins, doors open at 6:00pm, the show will begin at 7:00pm. Tickets are available for purchase at Temple’s Liacouras Center box office or online at:  www.templeperformingartscenter.org.