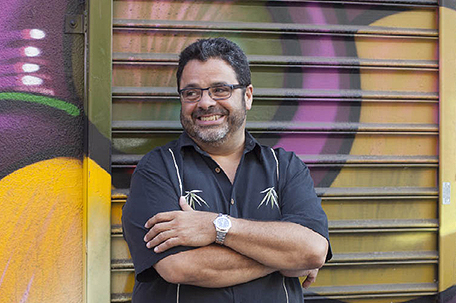 The Philadelphia Clef of Jazz & Performing Arts will present an exciting evening of Latin Jazz by Grammy Winning pianist/bandleader Arturo O’Farrill and the Afro-Latin Jazz Ensemble on Saturday, March 17, at 7:30pm. Performing with O’Farrill will be Ivan Renta on sax, James Seeley on trumpet, Rafi Malkiel on trombone, Carlos De Rosa on bass, Vince Cherico on drums, and Carlos Maldonado and Keisel Jimenez on percussion.

O’Farrill, who is the son of famed Afro-Cuban composer/arranger Chico O’Farrill, started his career playing with the legendary Carla Bley as well as the likes of Dizzy Gillespie, Harry Belafonte, and Lester Bowie. O’Farrill then became a backup pianist for the fabled Fort Apache Band, which was led by brothers Andy and Jerry Gonzales. With Fort Apache, O’Farrill learned to master Afro-Cuban music and make it part of his repertoire.

O’Farrill eventually assumed the leadership of his father’s Latin Jazz Orchestra. In 2001, Wynton Marsalis, who wanted to introduce Afro-Cuban jazz into the programming at Lincoln Center, asked O’Farrill to form an aggregation which eventually became known as the Afro-Latin Jazz Orchestra.(ALJO) Since then O’Farrill has been recognized for being one of the top Latin Jazz performers by fans and critics alike.

In 2007, O’Farrill separated from Lincoln Center and made ALJO a separate organization. Under the leadership of O’Farrill, the ALJO became an internationally renowned ensemble, even traveling to Cuba in 2010 to perform his father’s compositions.
O’Farrill’s recordings have become regular Grammy contenders. His first ALJO recording — “Una Noche Inolvidable” — was nominated for a Grammy in 2006. O’Farrill and the ALJO was subequently nominated for a total of five Grammys winning in 2009 for “Song For Chico”, 2015 for “Offense of the Drum”, and in 2017 for “Familia, a Tribute to Bebo & Chico.”

Arturo O’Farrill and The Latin Jazz Ensemble will perform at the Philadelphia Clef Club of Jazz & Performing Arts, located on 736-38 South Broad St. on the Avenue of the Arts. Tickets are $35.00; and 25.00 for students. and may be purchased in advance.

The Arturo O’Farrill concert is part of the “Preservation Jazz Series, ” which is sponsored by a grant from the National Endowment for the Arts and the Wyncote Foundation.

Kelenia comes to the Clef Club