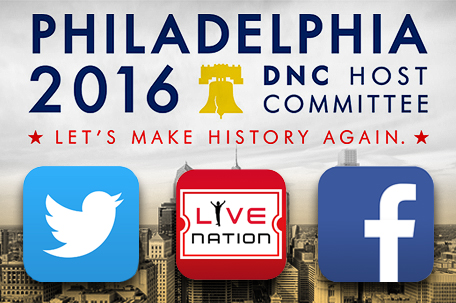 “As a thank you to our nearly 20,000 registered volunteers, we are thrilled to offer them free passes to this music festival, which will be a great way for them to celebrate the start of Convention Week,” said Kevin Washo, Executive Director of the Philadelphia 2016 Host Committee. “It is important to us that Philadelphians get a chance to participate in Convention fun around town, which is why we are also creating this social media contest to encourage them to show off their knowledge of their city and win passes to this fun, local music event. We’re grateful to Live Nation for partnering with us to provide these special entertainment opportunities for volunteers and Philadelphians alike.”

Starting today, the Host Committee will hold a promotional contest on social media, posting photos of Philadelphia locations featured in Philly-based songs and films on its Facebook and Instagram channels. Each of the featured landmarks have made a cameo in a well-known film or song, and participants will have to name that tune or movie for a chance to win a free day pass to the three-day music festival.

Followers of the Host Committee’s Facebook and Instagram channels should submit their answer in the comments of each post in the promotional series and ten winners with the correct answer will be randomly selected from each clue. Winners will receive a code that unlocks their tickets to the XPoNential Music Festival.

Additionally, as a thank to its volunteers, the Host Committee will gift tickets to the music festival to all of its volunteers, which they would be able to use to attend the festival before the Convention begins on July 25th.

“We’re really proud to support the Host Committee with tickets to the XPoNential Music Festival 2016. This is truly one of our favorite weekends of the year – and we’re excited to invite people visiting for the DNC,” said Jim Sutcliffe with Live Nation.

The photos for the social media content series were shot by Philadelphia 2016 Host Committee staff photographer Nick Sisofo and will appear on the following social channels starting today: