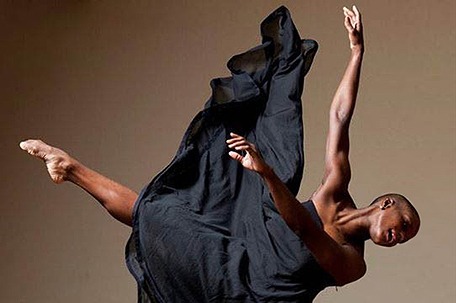 Philadanco! is known nationwide and abroad for producing an incredibly high quality of dancers and performances. Hope Boykin is one of those dancers. Originally from Durham, North Carolina, Boykin made her way to Philadelphia and danced with Philadanco! for 6 years. She later went on to join The Alvin Ailey American Dance Theater in 2000. Boykin also worked as an assistant to world-renowned choreographers Milton Myers and the late Talley Beatty.

The triple threat (dancer, choreographer and filmmaker) continues to share her love for dance through her own dance company, HopeBoykinDance, and returns to Philadanco! to choreograph a piece for their fall lineup called “The Continuum- Now/New/Next.” Boykin spoke with the SUN about her journey in the dance world and her excitement to be working with Philadanco! again.

Boykin, like many creatives, found her passion at an early age.

“I think I’ve always been a mover. My mother takes full credit for getting me into dance and gymnastics when I was very young —  [at age] 3 or 4,” Boykin said. “Then you take that hour-and-a-half class, where you have a half-hour tap, half-hour jazz and a half-hour for ballet. Then for the recital, you have the leotard that you can add the fringe skirt for tap and the tutu for ballet — that was sort of how it began. I don’t remember not doing everything possible to dance. I played piano, I played clarinet, I was on the softball team.  I did all those things for a moment, but dance sort of stayed in my spirit.”

“That was a lesson, because I got to meet a lot of dance pioneers there and work with a lot of people who had a lot of influence on folks like Joan Myers Brown and Philadanco! I met Talley Beatty there, Donald McKayle, Louis Johnson, Pearl Primus… these true incredible Black pioneers of modern dance,” Boykin said. “It was, like, ‘this is where you should go.’When I was looking for dance companies, Talley Beatty actually said ‘I think you should land at Philadanco!. This is the company I think is for you  — you move like a Philadanco! dancer.’ That was my arrow pointing towards them. In 1994, I auditioned and got in.”

Philadanco! has not only nurtured and fostered the careers of incredible dancers during its tenure, but the organization continues to reach back to former company members to bring them into the fold of what’s to come.

“It’s interesting because Philadanco! has always been a nurturing space for creating new work with a program that they have called “Danco on Danco, where the company members choreograph [for]  other company members,” Boykin said. “I was always a part of that. Once I left the company, she (Joan Myers Brown) invited me back. The first work I did was “Be Not.” Then I did “Going by the Day,” and then there was “Testimony.” This will be my fourth work coming back to create for the company. She’s always wanted to encourage me. She kept saying, ‘let’s give this a try, how about trying this work, let’s do this… we have some room for a choreographer, we’d love to invite you back.’ There’s always been that return to Philadanco! spirit that she wants to keep going for us. Those of us that are alumni never really leave. I believe she likes to say we’re gone without the ‘e’.”

“Although JB founded the company in 1970, she founded it as a repertory company,” Boykin continued. “She’s always had her eye out for what’s coming in, who’s coming in, taking a chance, and a risk — it’s really a risk when you invite someone in. It’s incredible that Philadanco! is a repertory company and from all of that work, Joan Myers Brown and now Kim Bears-Bailey have become master curators of seeing what’s out there and really taking the opportunity to look at young, upcoming, emerging artists and saying let’s give them an opportunity. But not just emerging artists, but also saying, ‘Hope, what are you working on? What have you been honing? How have you been diving into your craft?Let’s bring it back and start again.’”

“The Continuum: Now/New/Next” fall program combines a wide array of diverse works from a number of incredible choreographers.

“I have not seen any of the other works, but I know all of the other choreographers,” Boykin said. “Francisco Gella and I danced in Philadanco together. Bernard Gaddis was in the company before I got into the company and I’ve always looked up to him and admired his work. He invited me to set to work with his company in Las Vegas. Ephrat Asherie is just an incredible worker and groundbreaking in their style of dance.”

“The work that I’ve created is a solo that represents me,” she said. “I’ve decided to take on some of my trials… some of the things that we experience — rejection, loneliness. Sometimes we suffer with various things, and I’ve brought those aspects out in the work. Sometimes we’re a part of that upset and that discomfort– how do we use that discomfort to take off to our next place? We can’t really pretend that we’re not hurting. We shouldn’t have to pretend that we’re not going through something, but then we have to decide how we’re going to use all of those things as building blocks to move us to the next place.”

“The acting, portraying a character is also as draining emotionally as it Is physically,” Boykin added. “This dancer, Clarricia Golden, is incredible. She has taken this challenge and run with it. It’s become hers, it’s no longer my work — it definitely belongs to her and I’m truly excited to see what she brings to the stage.”

Boykin continues to elevate, move and grow towards the new and next. Her latest film, “Beauty Size & Color,” is available to watch at: www.pbs.org and www.allarts.org. Be sure to follow and keep up with everything Hope Boykin is doing by visiting her website at: www.hopeboykindance.com and follow her on IG @HBDance.