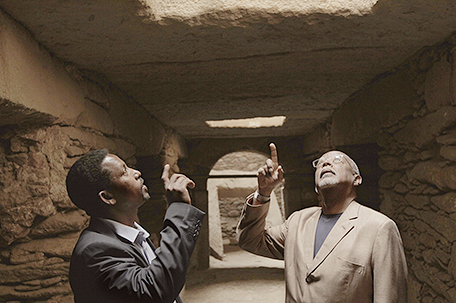 ABOVE PHOTO:   Henry Louis Gates, Jr. and Assistant Professor Abebaw Gela marvel from the tunnels below the stelae field in Axum, Ethiopia. Each stelae is made from a single piece of granite.  (Credit: Courtesy of Courtesy of Nutopia Limited)

ARLINGTON, Va.–To honor Black History Month, and as part of its commitment to celebrate the diversity of America year-round, PBS kicks off a new year with documentaries and specials that highlight the African-American experience on member stations and online through the PBS Black Culture Connection. New offerings include programs that reflect on the contributions of icons like the late Maya Angelou, celebrate beloved artists like Smokey Robinson and showcase independent documentaries about the valiant efforts of those pushing for change through thoughtful dialogue.

“Audiences turn to PBS year-round to find thoughtful programs about topics and issues that are top of mind in our nation and inclusive of a diverse America,” said Beth Hoppe, Chief Programming Executive and General Manager of General Audience Programming at PBS. “Black History Month provides a special opportunity to highlight the contributions of African Americans to our history and culture. Whether on-air or online, viewers can watch programs that honor the triumphs and achievements of many great Americans anytime and anywhere.”

On Monday, February 6, Emmy-winning documentary series “Independent Lens” presents “Birth of a Movement,” based on the book “The Birth of a Movement: How Birth of a Nation Ignited the Battle for Civil Rights” by Dick Lehr. The documentary tells the little-known story of William Trotter, an African-American journalist who launched a protest against the 1915 release of D. W. Griffith’s controversial epic, and which laid the groundwork for the civil rights movement to come. Featuring interviews with historians and filmmakers such as Henry Louis Gates, Jr. and Spike Lee, “Birth of a Movement” also explores how Griffith’s film continues to motivate African-American filmmakers and the artists as they work to reclaim their history and their onscreen image.

Also from “Independent Lens” airing Monday, February 13, is “Accidental Courtesy,” featuring Daryl Davis, an African-American musician who meets and befriends members of the Ku Klux Klan in an attempt to change their minds and forge racial conciliation, one racist at a time.

On Friday, February 10, airing as part of PBS Arts programming, “Smokey Robinson: The Library of Congress Gershwin Prize For Popular Song” honors the singer-songwriter during this star-studded music special hosted by Samuel L. Jackson, with a special appearance from Motown founder Berry Gordy and featuring performances by BeBe Winans, Ledisi and CeeLo Green, to name a few. Robinson, a rhythm and blues icon nicknamed the “King of Motown,” has enjoyed a career spanning more than half a century. The Library of Congress Gershwin Prize for Popular Song is awarded annually to a composer or performer whose lifetime achievements exemplify the standard of excellence associated with the Gershwins.

“The Talk-Race In America”, premiering Monday, February 20, is a two-hour documentary about “the talk,” the conversation parents of color have with their children about how to behave if stopped by the police. The film illustrates the issue from multiple points of view: parent, child, the police and the community. The film, airing in the wake of shootings of unarmed men of color such as Michael Brown, Trayvon Martin and more, features interviews with Kenya Barris, creator/writer of Peabody Award-winning ABC series “black*ish”, musician/activist Nas, actor/director/activist Rosie Perez, director/screenwriter/producer John Singleton, New York Times columnist Charles Blow, and Samaria Rice, mother of Tamir Rice, a 12-year-old boy killed by the Cleveland police in a local park.

On Tuesday, February 21, “American Masters” presents “Maya Angelou: And Still I Rise,” the first documentary feature about the incomparable author and activist Maya Angelou (1928-2014), best known for her autobiography “I Know Why the Caged Bird Sings”. The film weaves her words with rare and intimate archival photographs and videos that paint hidden facets of her exuberant life during some of America’s most defining moments. From her upbringing in the Depression-era South to her work with Malcolm X in Ghana, to her inauguration poem for President Bill Clinton, the film takes a journey through the life of a true American icon. The documentary features exclusive interviews with Angelou, her friends and family, including Clinton, Oprah Winfrey, Common, Alfre Woodard, Cicely Tyson, Quincy Jones, Hillary Clinton, Louis Gossett, Jr., John Singleton and Angelou’s son, Guy Johnson. 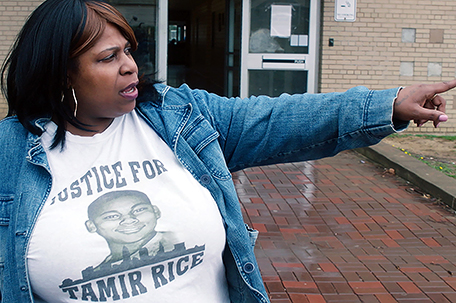 Samaria Rice, mother of Tamir Rice, who was a 12-year-old boy killed by the Cleveland police while playing with a toy gun in a local park. In a scene from “The Talk – Race In America” documentary.
Credit: (Courtesy of © 2016 THIRTEEN Productions LLC)

Also airing throughout February is the second season of the PBS original series “Mercy Street” (Sundays at 8:00 p.m. ET, beginning January 22), a Civil War-era drama about the chaotic world of Union-occupied Alexandria, Virginia, and the Mansion House Hospital in the early years of the Civil War. The original PBS drama explores, among other topics, the role that African Americans — including slaves, free blacks and contraband (African Americans who fled slavery in the hope of securing their freedom behind Union lines) — played in the hospital and the city. This season introduces newcomer Charlotte Jenkins (played by Tony Award-winning actress Patina Miller), a runaway slave turned abolitionist who goes to Alexandria to help the contraband population adapt to freedom.

New on February 27 – March 1 from Henry Louis Gates, Jr. is an epic new documentary series, “Africa’s Great Civilizations” that brings to life stories of both little-known and celebrated African kingdoms and cultures, and includes a historical reflection on the slave trade to the Americas.

In addition to on-air programs, the PBS Black Culture Connection (BCC), an extension of PBS.org, features black films, stories and discussion across PBS, and provides audiences with a catalogue of more than 30 programs available for streaming. Most PBS programs are available for streaming following their broadcast via the PBS apps for iOS and Android devices and via station-branded digital platforms including Roku, AppleTV, Amazon Fire TV and Chromecast.

A complete preview of programs related to the African-American experience includes:

Allegiances blur and loyalties shift as the war pushes the drama beyond the hospital. Follow the growing chaos at Alexandria’s Mansion House, the precarious position of the Green family and the changing situation of the burgeoning black population.

INDEPENDENT LENS “Birth of a Movement”

Learn how D.W. Griffith’s 1915 film The Birth of a Nation unleashed a battle still being waged today over race relations and representation, and the power and influence of Hollywood. Featuring Spike Lee, Reginald Hudlin, Henry Louis Gates, Jr. and others.

Join host Samuel L. Jackson for an all-star tribute to singer and songwriter Smokey Robinson, the 2016 recipient of the Gershwin Prize, with a special appearance by Berry Gordy, founder of Motown.

Meet African-American musician Daryl Davis, who has a peculiar passion — meeting and befriending members of the Ku Klux Klan in an attempt to change their minds and forge racial conciliation.

“THE TALK – RACE IN AMERICA”

In the wake of recent tragic and fatal events between men of color and law enforcement, learn how black and Hispanic families counsel their kids to stay safe if they are stopped by the police.

Journey through the prolific life of the I Know Why the Caged Bird Sings author and activist who inspired generations with lyrical modern African-American thought. Features new interviews with Oprah Winfrey, Common, the Clintons and others.

Beginning with Africa’s ancient history as the cradle of mankind, this documentary series with Henry Louis Gates, Jr. brings to life the epic stories of both little-known and celebrated African kingdoms and cultures.

Thrill to an hour of soul and gospel. Grammy-winning legend CeCe Winans sings new songs and classics from her catalog, while breakout sensations St. Paul & the Broken Bones support their acclaimed album Sea of Noise.

Experience an hour of contemporary hip-hop from Grammy-nominated superstar Kendrick Lamar. The Compton rapper plays songs from his acclaimed LP, To Pimp a Butterfly, alongside his hits.

“BLACK AMERICA SINCE MLK: AND STILL I RISE”

Henry Louis Gates, Jr. looks at the last 50 years of African-American history — from Stokely Carmichael to Barack Obama, James Brown to Beyoncé — charting the remarkable progress made and raising hard questions about the obstacles that remain.

“Out of the Shadows/Move on Up”

Henry Louis Gates, Jr. takes a personal journey through the last 50 years of African-American history, charting the incredible progress made — as well as the obstacles that remain. Features conversations with Jesse Jackson, Nas and Donna Brazile.

“Keep Your Head Up/Touch the Sky”

Henry Louis Gates, Jr. explores America’s changing racial landscape — celebrating how far we have come toward equality and asking why we still have so far to go. Features conversations with Eric Holder, Shonda Rhimes and DeRay Mckesson.

“THE BLACK PANTHERS: VANGUARD OF THE REVOLUTION”

Revisit the turbulent 1960s, when a revolutionary culture emerged with the Black Panther Party at its vanguard. Stanley Nelson tells the vibrant story of a pivotal movement that feels timely all over again.

“BRIDGING THE DIVIDE: TOM BRADLEY AND THE POLITICS OF RACE”

“DEEP CITY: THE BIRTH OF THE MIAMI SOUND”

Learn how two musical geniuses created the first black-owned record label in Florida. Explore the early days of 1960s soul music in Miami, the pioneers of that era and their lasting contributions to the broader American musical landscape.

Join Harvard scholar Henry Louis Gates, Jr. as he delves into the genealogy of 27 guests. Each story illuminates the vast patchwork of ethnicity, race and experience that makes up the fabric of America.

Discover the story of Wisconsin’s Vel Phillips — the nation’s first African-American, and woman, elected to executive office in state government — and one of the pioneers of the civil rights era. Emmy-winner S. Epatha Merkerson narrates.