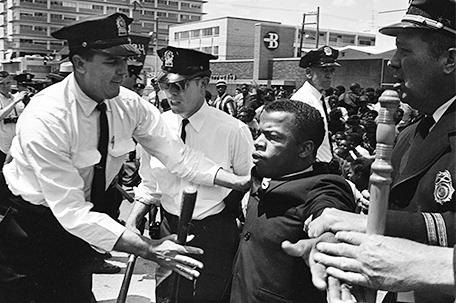 ABOVE PHOTO:  A scene from the PBS documentary; “John Lewis–Get in the Way”

PBS and Georgia Public Broadcasting announced today that “John Lewis – Get in the Way,” a new documentary produced and directed by Kathleen Dowdey, will premiere Friday, February 10, 2017, 10:30-11:30 p.m. ET (check local listings) on PBS. The first documentary biography of Lewis, whose unwavering fight for justice spans the past 50 years, is part of Black History Month programming on PBS. The son of sharecroppers, Lewis grew up in rural isolation, seemingly destined for a bleak future in the Jim Crow South. But Lewis took a different path, rising from Alabama’s Black Belt to the corridors of power on Capitol Hill, his humble origins forever linking him to those whose voices often go unheard.

“John Lewis – Get in the Way” spans more than half a century, tracing Lewis’ journey of courage, confrontation and hard-won triumphs. At the age of 15, his life changed forever when he heard Dr. Martin Luther King, Jr. on the radio. It was 1955, during the Montgomery Bus Boycott, and Lewis listened with rapt attention as the young preacher called for nonviolent resistance to the harsh injustice of segregation. Lewis embraced Dr. King’s spiritual call with a fervor that would transform the course of his life.

As a student activist in the vanguard of the civil rights movement, Lewis was arrested and jailed for the first time during the Nashville lunch counter sit-ins in 1960. During the 1961 Freedom Rides, he was repeatedly assaulted by angry mobs. He was the youngest speaker at the historic 1963 March on Washington, and in March 1965, Lewis led the Bloody Sunday march in Selma, Alabama, where state troopers attacked peaceful protesters with billy clubs, bullwhips and tear gas. Their horrific actions were broadcast on news reports into living rooms across America; eight months later, the Voting Rights Act was signed into law.

“Atlanta and the state of Georgia have played a pivotal role in the civil rights movement,” said Georgia Public Broadcasting President and CEO Teya Ryan. “Through the years we’ve shared the stories of many of the movement’s greatest heroes with Georgia ties, including Martin Luther King Jr. and Andrew Young. We are thrilled to bring a film that so eloquently captures the legacy of John Lewis to a national audience through PBS.”

Once an activist pushing from the outside, Lewis, now 76 years old, has become a determined legislator creating change from the inside. Considered by many to be the conscience of Congress, with equal measures of modesty and forcefulness, Lewis strives to persuade D.C. powerbrokers to hear the voices of the unheard. He fights for those suffering from discrimination, poverty, poor education, police brutality, inaccessible healthcare and limitations on voting rights.

“John Lewis – Get in the Way” airs as part of a full line-up of Black History Month programming on PBS, which celebrates the diversity of America with documentaries and specials that highlight the African American experience. Visit PBS.org for the full list of programs.