Patrick Clanton rocks out in ‘School of Rock’ 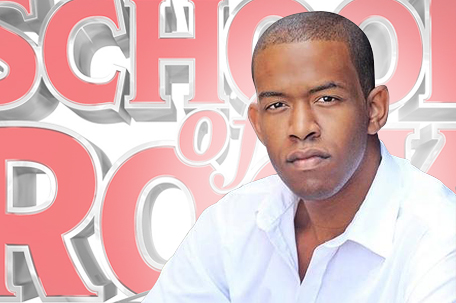 The film “School of Rock” and its cast of talented young musicians stole the hearts of music lovers nationwide when it premiered in 2003. In the film, Dewey Finn (Jack Black) struggles to cling to his rock and roll dreams after being kicked out of his band. He finds himself posing as a substitute teacher to a group of middle schoolers at one of the most prestigious schools in the country. Redemption lies in the endearing journey to self- discovery and acceptance by way of music.

In 2015, “School of Rock” was adapted into a musical and premiered on Broadway. With music by Andrew Lloyd Webber, lyrics by Glenn Slater and a book by Julian Fellowes, the play has been nominated for four Tony Awards. Under the direction of direction by Laurence Connor with choreography by JoAnn M. Hunter, the latest tour will make a stop in Philadelphia at The Academy of Music. Patrick Clanton, an original member of the touring production, spoke with the SUN about his experience in the show.

Originally from Garner, North Carolina, Clanton’s love for musicals was sparked in church and cultivated in high school and college. He studied musical theater at Elon University and credits his training from Elon as a huge factor in his success in the musical theater world. Clanton landed a role in his first national tour, “Sister Act the Musical”, just months after graduating and was cast in “School of Rock” not long after completing his first tour…something Clanton admitted came as a surprise.

“It was such a shock to me to get this show because I had kind of counted myself out… I almost didn’t go to the audition,” he said.

“I remember renting the movie from Blockbuster back in middle school and I loved it. It’s one of those movies where any time it’s on TV I would stop and watch it. I also saw the show on Broadway with the original company before I auditioned. When I saw it I really enjoyed it, but I didn’t really think that there was anything in it for me to play. I’m 25, and all of the adults in the cast play parents to the kids in the cast. I thought to myself, I’m too young to play a parent to a 10 or 11-year-old but thankfully the casting director thought otherwise.“

Clanton is a renaissance man of sorts in “School Of Rock.” As a member of the ensemble, he takes on three different roles during each performance.

“I play Gabe Brown, who is the science teacher at the school. He’s very suspicious of Dewey from the very beginning. I play the father to Freddy, who is the kid drummer in the show. He’s a father who just wants what’s best for his son… even though his son thinks he’s too hard on him. And I also play Jeff Sanderson, who is the director of “The Battle of the Bands.” So I get to have a couple of fun scenes with the kids,“ he said.

In addition to enjoying the challenge of playing three roles, Clanton shared his enthusiasm about performing music created by the iconic Andrew Lloyd Webber.

“One of the things I thought about was that since the show is relatively new so not too many people have performed this material… and I’m singing the music of the man who wrote ‘The Phantom of The Opera’ and ‘Cats,’ he said. “He actually came to see the show while we were in Columbus, Ohio. To meet him was just so surreal! It was really cool to know that he cared about our tour and that he took the time out to come see it and meet everybody.”

The children are the heart of “School of Rock.” The show’s themes such as reconnecting with one’s inner child and fully embracing the magic that childhood brings will undoubtedly hit home.

“I get a little teary-eyed sometimes watching the kids because a lot of them have been with us since the beginning,” Clanton said. “We just lost like eight of our kids… they grew up. That was one of the hardest and saddest days because we didn’t want to see them go.”

“As the adults in the cast, the kids have become like our little brothers and sisters and we really bonded with them.” Clanton continued. “It has been so wonderful working with these children. They’re superstars… all of them! The ones that play the instruments they all play them live every night. There’s no faking and there’s no one backstage playing instruments for them… They’re incredible!”

Clanton shared his hopes for what the audience will take away from “School of Rock” the musical.

“A big theme of the show is to listen. So many problems can be fixed if we all just listen to each other. It’s also about not losing your inner child. The person that you used to be at one point that maybe over time society has kind of chipped away at and made you a little bit colder and a little bit harder… it’s about reawakening that person and that spark that’s inside of you. The biggest thing I hear is that when the audience leaves, everybody is smiling. As long as that’s happening we as performers have done our job.”

Patrick Clanton is only at the beginning of his career and on an amazing path with much more to come. To keep up with Clanton, follow him on Instagram @patrickclanton. “School of Rock” will be at The Academy of Music from Tuesday March 27th through Sunday April 1st. To find out more information about tickets and showtimes visit www.kimmelcenter.org.