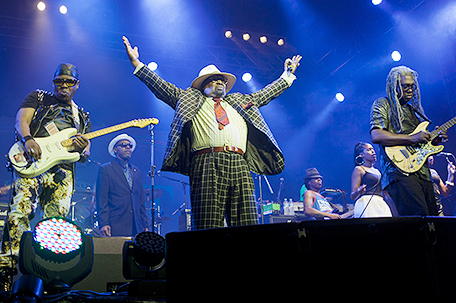 Friday, October 7, 2016, was easily the best night to be alive!  If you’re a fan of George Clinton and Parliament Funkadelic, and you were in the place, you experienced childlike wonder and magic touch down.  The Mothership landed at the Underground Arts concert venue in the Spring Garden section of Philadelphia and the energy was pure ecstasy.  Underground Arts is the perfect venue to experience such a revolutionary funk as it is intimate, the acoustics are loud, and the walls are filled with red, teal, white and purple art.  At one point it seemed the art was swaying along to the beat as the roof was truly torn off the “motha sucka!”

From old classics to the fan favorites, Underground Arts and what felt like the whole of Philly was covered in “PFunk love.”  The air was thick with music, body heat, sweat, sex, and sticky icky which is typical of the best musical party found in the land.  Lots of freshly rolled ‘cigarettes’ were passed through the crowd, with some making their way to the stage, much to the crowd’s enjoyment.

George Clinton truly showed up and showed out as the intimate venue was packed to the brim with young and old there to celebrate the week coming to an end, and the jamminest, slamminest crew on the scene!  A hometown favorite even made a cameo appearance — Bilal turned up the intensity and performed a song with the legendary eclectic crew of Funkateers.  One young fan even brought his George Clinton vinyl collection, pushing his way to the front of the crowd to show the band he was a true appreciator of the tireless work put in over decades.  “Oh there’s so many great ones, but I’d have to say Acupuncture from the PFunk All-Stars Album is probably my favorite song.”  Generations weren’t just represented in the crowd either.  George incorporated vocalist and rapper Tracey ‘Tra’zae’ Clinton along with background vocalists Tonysha Nelson, Patavian Lewis (her grandmother is Pat Lewis, a former vocalist with the band), and Brandi Scott, performing song ‘Meow Meow’ with as much sex appeal as the crowd could handle.

It’s truly a family affair as George’s grandchildren represent the new school PFunk with nephew and vocalist Sa’d Ali as Creative Director of A&R for the C Kunspyruhzy Record Label.  “I’m apart of the original Parliament Funkadelic.  There’s only one in the world.  We’re bringing in the younger generation to keep the legacy going.  Like Puffy did for Bad Boy, this is George Clinton’s Bad Boy.”  He is well on his way as every one of the younger Funkateers has talent to boot.

The most memorable aspects of the night were the horns serenading the crowd into the atmosphere with Greg Thomas on the tenor saxophone and Bennie Cowan on the trumpet.  Each one of these men kept the crowd moaning as their solos got bigger and better with each song. Carlos ‘Sir Nose’ McMurray was a crowd pleaser for all the ladies in attendance, winding and grinding his well-chiseled chocolate frame to the disco beats provided by the band, doing all kinds of acrobats, and doing them well.  He invited a lucky young woman with a particularly prominent and purple Afro to the stage to dance with him, causing a dance sandwich with George and Sir Nose.  Everyone was energized by the polyphonous rendition of PFunk, with the audience singing along with every change of tempo and guitar riff the band could throw.

I for one really need an initiative to bring the Mothership back to the city of Brotherly Love and Sisterly Affection once a year if not more.  The energy was infectious and the crowd was calm and mellow, only there to turn up the noise and keep the party going well after the show was through.  George performed at least 3 extra songs until he finally threw in the towel telling us all we didn’t have to go home, but had to get the funk out of there.  And after church was let out and the Dr. Funkenstein said Amen, the vibe flooded the Philly streets and fizzled into the atmosphere as faithful fans celebrated a night not soon to be forgotten when music became an ethereal experience on this funky a** Friday for the record books.