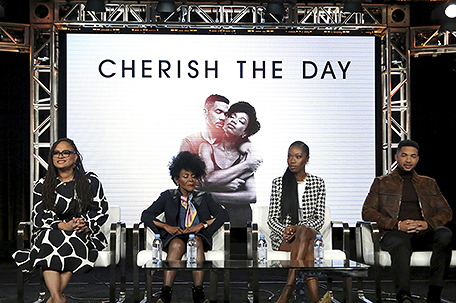 ABOVE PHOTO: Ava DuVernay, from left, Cicely Tyson, Xosha Roquemore and Alano Miller appear at the OWN: Oprah Winfrey Network’s “Cherish the Day” during the Discovery Network TCA 2020 Winter Press Tour at the Langham Huntington on Thursday, Jan. 16, 2020, in Pasadena, Calif. (Photo by Willy Sanjuan/Invision/AP)

LOS ANGELES — To separate filmmaker and TV producer Ava DuVernay’s trenchant, history-driven projects, including “Selma” and “When They See Us,” from her new romantic drama series is to sell short the determined thoughtfulness that shapes all her work.

OWN’s intimate, eight-episode “Cherish the Day,” which tracks a couple’s relationship over five years, is superficially a far cry from DuVernay’s accounts of African American struggles for civil rights and against injustice or even her first OWN series, the sprawling family saga “Queen Sugar.”

But as DuVernay tells it, the love story (10 p.m. EST Tuesday) represents a bedrock truth.

“I’m constantly thinking about the things that are important to me, and trying to pinpoint and navigate my place in the world as a Black woman and culturally,” she said. “And Black love is a radical part of the survival of Black people, more important than … the stories that make it in the history books, because love is the driver of all those things.”

As examples, she invokes the devotion of Emmett Till’s mother, who brought the teenager’s 1955 lynching to the forefront, and the black community’s embrace of Martin Luther King Jr.

Love allows “people who are oppressed to survive in a world that doesn’t really love them, or show love to them,” DuVernay said. “I’m always amazed by stories about the Holocaust … the stories of whole families, fractured generations of people, who we know healed themselves through love.”

Her perspective makes the genesis of “Cherish the Day,” which launches OWN’s first anthology series, less improbable: The Emmy-winning, Oscar-nominated “13th,” an examination of racial inequality in the American prison system. As the documentary concludes, Common’s song “Letter to the Free” plays over a montage of smiling faces that DuVernay said represent “black folks in everyday life, enjoying life.”

“All that was to say, even through this oppression and marginalization and this bias and this racism is a part of our lives here, we’ve loved through it and we built through it,” she said. “That really was the first time I started to get the idea for this show.”

Hollywood, which long shied away from non-white romances, has started to make room for them with films including “Crazy Rich Asians” and the newly released “The Photograph,” starring Issa Rae and Lakeith Stanfield. TV is more inclined to feature couples of color in multi-ethnic shows such as “This Is Us,” and routinely in sitcoms such as “black-ish” or a dramedy like Rae’s “Insecure” or Donald Glover’s “Atlanta.”

Filling the void wasn’t “top of mind,” DuVernay said. But Alano Miller, who stars opposite Xosha Roquemore in “Cherish the Day,” is glad she did.

Miller (“Underground,” “Jane the Virgin”) plays Evan Fisher, born into a Los Angeles family with means and making a name for himself in tech, opposite Roquemore’s Gently James, from a less-settled background and with an adventurous streak. Award-winning screen legend Cicely Tyson (“Sounder,” “The Autobiography of Miss Jane Pittman”), plays Gently’s mentor, a woman who’s lived a celebrated life.

“As an actor, I’m looking at holes: where we’re not being seen, or what is interesting in the way we can tell it,” said Miller, applying that to TV’s overall lack of romances, not only ethnic ones. “I haven’t seen anything in a long, long time that had to do with love in general,” he said, aside from the rare bird like Amazon’s ”Modern Love.”

Looking back, Miller was as much taken with the classic films of Cary Grant (including 1957s “An Affair to Remember,” saluted by filmmaker Nora Ephron in 1993s “Sleepless in Seattle” ) as he was with his own generation’s movies, including 1997s “Love Jones” with Larenz Tate and Nia Long,

Roquemore was glad to tackle her first screen romance, which she thought might not be “in the cards” for her given that Black female leads in love stories are usually light-skinned and because she’d become known for her comedic work, including in Mindy Kaling’s “The Mindy Project.”

Since she’s had her own real-life romances (including with Stanfield, her former partner with whom she has a daughter), perhaps it was a “question of me not thinking big enough,” Roquemore said. Then came “Cherish the Day.”

“It’s so cool for it to happen,” she said. “And in terms of it being a show about black love, I think we need as many human iterations of black people in media as we can get. We’re still trying to normalize the regular  Black experience, so if I can play a role in the process that does that, I’m honored.”

DuVernay said the series has the right home on the Oprah Winfrey-founded OWN, where it reaches black female viewers that she described as focused on family, relationships and spiritual well-being (although as with “Queen Sugar” and its second window on Hulu, “Cherish the Day” will reach others as well).

“We have an audience that is dynamic and dedicated and underserved with things that look beautiful, writing that is meaningful, and that they’ve really responded to,” DuVernay said.