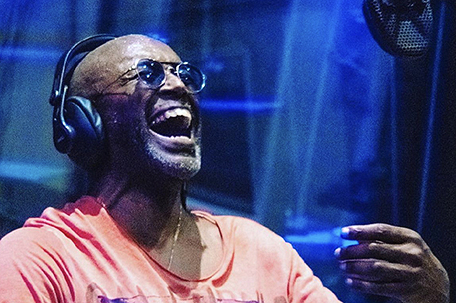 Born in London, Owen Valentine, also known as “The Vocal Scientist,” is a vocalist, performing artist, voice coach to the stars and multi-instrumentalist. Known best for his vocals and violin playing (acoustic/electric 4 and 5 string), Valentine also plays the bass (electric and upright), the piano (acoustic and synthesizers), the harmonica (diatonic and chromatic) and is a percussionist with a focus on Latin, African and world music styles. His degrees in jazz voice and jazz violin gave Valentine a solid foundation.

As a performer, Valentine has shared the stage with Sun Ra, Gil Scott-Heron, George Duke, Teena Marie, Parliament-Funkadelic, and more. He also recently opened for the legendary Isley Brothers. Additionally, he uses his command of naturopathic medicine as a vocal coach to help guide and keep the voices of world-renowned performers such as Jill Scott, Earth Wind & Fire, Mary J. Blige, Boyz II Men and countless  others healthy and thriving.

His latest creation, Scat Camp, uses the expertise Valentine has acquired over the course of his career. He spoke to the SUN about his upcoming Scat Camp and what he hopes it will offer singers.

Early on, Valentine developed a love of music. Both of his parents were musically inclined, which contributed to his innate talent.

“I think my love for music starts at birth,” he said. “As soon as I can remember being me, I just remember loving sounds and feelings of music moving around me. My mother was a singer, and my dad was a trumpet player. He was a dentist, but he was also a trumpet player. So, I had my mother who sang and played piano and the organ, and then my dad played trumpet. There was this thing inside me, from what I understand. I was to learn later that my dad used to play Charlie Parker records over my crib.”

Valentine’s love for music paired with his ability to play several instruments pushed him to pursue a life and career in music in a way that can only be described as destiny.

“Sometimes it wasn’t my choice — sometimes life just pushed things out my way so that music would be all that was left,” he said. “I wasn’t really aiming for the money or the career. I was a person that loved music and wanted to learn, sing, play, dance, and act. Then I became a young father, and it was, like, ‘what are you going to do? Are you going to do this stuff over here or the stuff over there?’ And I said, ‘Music is the choice.’”

After making that choice, Valentine dedicated his life to his craft, taking music lessons from anyone who would teach him and devoting upwards of 7-8 hours a day to practice. His tenacity and dedication were recognized and resulted in him working with some of the best in the business.

“Before I knew it, Sun Ra picked me up,” he said. “From Sun Ra, I ended up with Gil Scott-Heron, P-Funk, George Duke and all kinds of people.”

In addition to the vast knowledge he acquired by working with the greats, Valentine studied music theory, technique, and the science of music, which eventually led him to become a vocal coach. Although his path to becoming a vocal coach was anything but traditional,

Valentine has used his extensive grasp of music to help strengthen cultivate and train some of the most popular singers in the music industry.

“People said, ‘how did you learn all this stuff?’ I said I didn’t do anything else, I just buried myself in it,” Valentine said. “So, people started asking me to teach and I said I will never be a voice teacher. Then I said ‘ok, maybe I am good at it’ and before I knew it many of them — celebrities with gold and platinum records, Grammys and all kinds of wonderful things — started asking me the same question —  ‘[Can you] help me?’ I’ve been taking care of voices for a long time.”

Valentine is currently sharing some of the techniques he’s mastered over the years for an event he created called Scat Camp. In Scat Camp, attendees will explore melodic, rhythmic, and harmonic dexterity of different forms of vocal improvisation. He spoke about what inspired him to create Scat Camp.

“Singers are the only musicians who are expected to develop their skills and perform at a high level without getting very detailed information of how they’re supposed to do it,” Valentine said. “How about giving them some good technical information so they can do it? I believe in passion, but if you’re a passionate person behind a wheel but you never took a driving lesson, then there’s a good chance you’re going to hit somebody. Singing is the same way. You need to have some information more than just take a deep breath, use your diaphragm and things like this. You need to have enough information to help you to accurately grow as a musician.”

“What Scat Camp is about for me is I just wanted to focus on one thing — let me teach singers how to improvise,” he continued. “How to improvise over jazz, hip-hop, R&B, gospel over rock or whatever kind of music you’re singing. Let me give you a way of getting better at improvising. For most singers, whatever they could do 10 years ago is what they can do now.”

Singers in attendance at Scat Camp can expect to dive headfirst into various ways they can use their voices through improv.

“I plan a whole day of vocal exploration,” Valentine said. “It’s a whole day of learning just about your voice, about improv and there is some fellowship too. I just want to make it a twice a year hang. Come to Philadelphia, be a better singer and meet some other singers. I want it to be known as the place where singers come to Philly to get better.”

Valentine will continue to expand and grow Scat Camp with Philadelphia as the hub and plans to take Scat Camp on the road in the near future. The First Scat Camp will take place on Saturday, July 16 from 9 a.m.-5:30 p.m. at the African Episcopal Church of Saint Thomas, located at 6361 Lancaster Avenue. For more information and to register, visit: www.ScatCampSummer2022.Eventbrite.com. Also be sure to follow Scat Camp on IG @scat_camp. To keep up with Owen Valentine, visit his website at:  www.theowenvalentine.com and follow him across social media platforms @thevocalscientist.

Owen Valentine: The Science of Sound