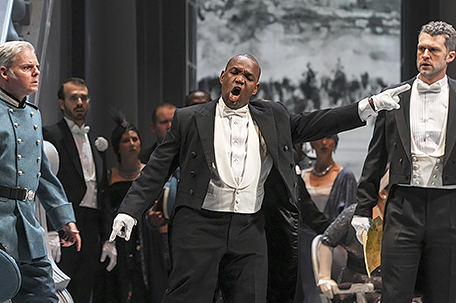 PHILADELPHIA — Rossini’s “Otello” premiered in 1816, and the musical adaptation of Shakespeare’s famous play was a hit for seven decades. Then Verdi’s version debuted in 1887 and was acclaimed as a pinnacle of the art form, causing Rossini’s version to recede into a rarity.

Opera Philadelphia excavated it last Friday night at the Academy of Music for its O22 festival in a showcase for tenor Lawrence Brownlee, the company’s artistic adviser.

“If you put it in the context of a year it was written, it is such a modern opera,” said Philadelphia music director Corrado Rovaris, who is conducting the run. “It was a great success. It was played everywhere, performed everywhere. All the big singers wanted to sing that opera.”

With three tenor roles — Brownlee as Rodrigo, Khanyiso Gwenxane as Otello in his U.S. debut and Alek Shrader as Iago — Rossini’s version isn’t easy to cast. There is the additional element of race: Shakespeare based “Othello” on Cinthio’s short story “Un Capitano Moro (A Moorish Captain).” Brownlee, a 49-year-old from Youngstown, Ohio, and Gwenxane are both Black. Brownlee was to have sung Rodrigo in a 2016 production at the Austria’s Theatre an der Wien but said he was dropped because the director could not envision a Black Rodrigo.

“I’m finally getting the chance to sing this role that I’ve always wanted to sing that has been a limitation because of my color,” Brownlee said. “You’ve seen musical theater show and represent much more openness to cast people in roles that were I guess historically considered Caucasian, even though maybe some of them didn’t necessarily say specific Caucasian man or Caucasian woman. Opera is trying to catch up. And the thing that I appreciate about Opera Philadelphia is they have really doubled down on their commitment to diverse casting, to make sure that the stage looks like a representation of the people in the city.”

Verdi may have attended the Rossini version at Milan’s Teatro all Scala during the 1834-35 season, according to Mary Jane Phillips-Matz’s “Verdi: A Biography.” During an 1878 dinner in Milan with music editor Giulio Ricordi, Verdi said the conversation turned to a discussion of Francesco Berio di Salsa’s libretto for Rossini, which they deemed undramatic and unsatisfactory. Within days, Arrigo Boito started sketching a libretto for Verdi, a letter between the two recalled.

Shakespeare set “Othello” in Venice and on Cyprus, while Berio di Salsa put the action entirely in Venice. Boito focused on Iago’s evil and disruption of Otello’s marriage to Desdemona, with a stolen handkerchief a key dramatic device, while Berio di Salsa portrayed a love triangle among Otello, Rodrigo and Desdemona, the plot turning on a letter with a lock of hair.

“Initially I had a little trouble with how from an acting standpoint, how Desdemona is continuously beaten down and pushed around and squashed by virtually every man that is on stage with her,” said mezzo-soprano Daniela Mack, who sings the female lead and in real life is married to Shrader. “It comes from her father. It comes from Rodrigo, to a lesser extent, but it certainly does, and from Otello ultimately. I had in my mind this couple was very much in love and has shared this mutual passion. It’s not at all like Romeo and Juliet. There’s an intrinsic violence in their relationship from the get-go.”

The last major U.S. production of the Rossini version had been at the San Francisco Opera in 1994, though there were concert and small-company versions, including Brooklyn’s LoftOpera in 2017.

Rovaris, music director since 2005, led Verdi’s version in Philadelphia in 2010. He first conducted the Rossini at the 1998 Rossini Opera Festival in Pesaro, Italy, with the assistance of Rossini scholar Alberto Zedda and musicologist Philip Gossett. He led another staging in 2010 at Switzerland’s Lausanne Opera.

“It was very interesting for me to find in my scores all the ornamentation that we brought together with Philip Gossett when we did it in Pesaro,” Rovaris said.

This staging by Emilio Sagi, with a single set in whites and grays by Daniel Bianc and costumes seemingly from the 1920s by Gabriela Salaverri, debuted at Belgium’s Opéra Royal de Wallonie-Liège last December and was set in a mansion that appeared more appropriate to Germany or Switzerland than Venice.

Philadelphia’s annual festival, launched in 2017, returns this season after missing two years due to the pandemic. There have been more than 40 events from Sept. 21 to Oct. 2, including the world premiere of David T. Little’s “Black Lodge” and a new production of Toshio Hosokawa’s “The Raven,” based on Edgar Allan Poe’s 1845 poem.