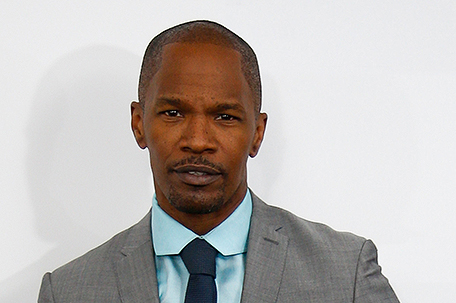 Foxx and the victim’s father, who met and talked Tuesday, said that Foxx and one other person pulled a man from his burning truck moments before it became engulfed in flames near Foxx’s Southern California home.

The California Highway Patrol (CHP) said the pickup went off the road in unincorporated Ventura County then went into a ditch, rolling over multiple times and becoming engulfed in flames with a male driver trapped inside.

Foxx said he heard the crash from his house, called 911, and ran to the scene. He said another man, an off-duty paramedic who was driving by, had large EMT scissors that the two used to break the truck’s window, cut the man’s seatbelt and pull him out.

Foxx said “within five seconds” the truck went up in flames.

Foxx said he told the man, “You’ve got to help me get you out, because I don’t want to have to leave you. You’ve got angels around you.”

“I don’t look at it as heroic,” Foxx told a group of reporters after meeting with Brad Kyle, the father of the 32-year-old victim Brett Kyle. “I just look at it like, you know, you just had to do something. And it all just worked out.”

Brad Kyle said he had been shown surveillance video of the crash scene, and he saw several cars passing by without helping.

“I just kept watching it and going ‘My god, my god, he didn’t have to do a thing,’ “ Kyle said, breaking into tears as he spoke. “I think we all hope that we can do something when the time is there. But the question is, do we act or do we fear for our own life? He did not.”

Brett Kyle has broken bones and a punctured lung, but he is expected to survive.

The CHP couldn’t confirm Foxx’s involvement, but the agency did say two witnesses helped extricate the driver, giving similar details to Foxx’s account. His role in the rescue was first reported by celebrity website TMZ.

The name of the paramedic who stopped and helped was not immediately available.