Oscar Moments: The night emotion won, for better and worse 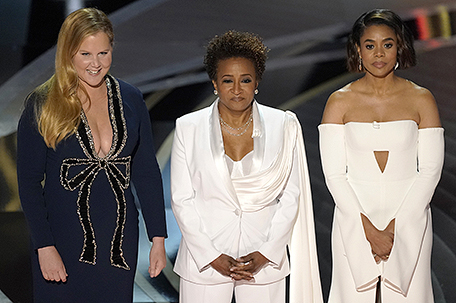 ABOVE PHOTO: Hosts Amy Schumer, from left, Wanda Sykes, and Regina Hall appear on stage at the Oscars on Sunday, March 27, 2022, at the Dolby Theatre in Los Angeles. (AP Photo/Chris Pizzello)

LOS ANGELES — “Did I miss anything?” quipped Oscars co-host Amy Schumer, returning to the Dolby Theatre stage after a break. “There’s a different vibe in here.”

Oh my, was there ever.

With a sudden, shocking outburst of anger from actor Will Smith, who bounded onstage to slap Chris Rock after the comedian joked about his wife’s appearance, the theater was thrown into a state of deeply uncomfortable shock.

“Did we just see that?” people said to each other, as realization grew that the outburst was not pre-planned or meant as a joke. Phones buzzed, too, with many audience members saying they were getting texts from friends or family watching at home, asking if they had seen what they thought they did.

The discomfort continued through the end of the show, even as a tearful Smith, as expected, won the best actor prize for “King Richard” and apologized to the academy, though not to Rock.

Every Oscar show has its big moments, but this one overshadowed them all. Still, there were others: The heart-tugging “CODA” had a great night, winning best supporting actor, best adapted screenplay and the big kahuna, best picture, ending the ceremony on an ebullient note. It was emotion that won there, too, as voters went with the movie that so many said made them cry, rather than the cool sophistication of the earlier favorite, “The Power of the Dog.”

There were other history-making wins, impassioned speeches, a smidgen of politics, and hardly a thought about the pandemic as revelers packed into the post-show Governor’s Ball.

Some key Oscar moments, some you saw on TV and some you didn’t:

Remember when the most controversial thing about these Oscars was those awards they moved to the hour before the TV broadcast began? In the end, the theater was about two-thirds full and winners accepted their awards with nary a protest, and the most rabble-rousing speech of the relaxed (untelevised) proceedings was when a winner paid tribute to craftspeople on all movie sets. “Dune” took an early lead in those awards, ultimately taking six Oscars. And the team responsible for Jessica Chastain’s metamorphosis in “The Eyes of Tammy Faye” won the Oscar for hairstyling and makeup.

It began on Oscar nomination day when Troy Kotsur, learning of his supporting actor nod for “CODA,” literally fell off his chair in a video that went viral. He continued to charm Hollywood and by Oscar night Kotsur, who plays a randy father in the film about a deaf family with a hearing child, was a clear favorite. Still, his win was emotional — many in the audience, including Chastain, Javier Bardem and Nicole Kidman, responded with waving hands — what is known as a deaf clap. Even his interpreter choked up during Kotsur’s speech. He joined “CODA” costar Marlee Matlin as the only deaf Oscar winners. “I just wanted to say this is dedicated to the Deaf community, the CODA community and the disabled community,” Kotsur signed. “This is our moment.”

TO BE IN AMERICA

Holding her Oscar in triumph, Ariana DeBose echoed the words of her famous character in “West Side Story,” Anita. “Now you see why Anita says, ‘I want to be in America,’” said DeBose, who won for best supporting actress, as expected. “Because even in this weary world that we live in, dreams do come true.” There was much that was special about her win. DeBose won the trophy 60 years after Rita Moreno claimed the award in 1962 for the original film version of the Broadway musical. And she made history as well, becoming the first Afro-Latina and openly LGBTQ actor to win in the category. “To anybody who has ever questioned your identity,” she said, echoing more lyrics from “West Side Story,” “I promise you there is a place for us.”

One might have expected there to be more political references on this Oscar night. There actually weren’t too many, but several presenters and winners did refer to Florida’s so-called “Don’t Say Gay” bill. Co-host Wanda Sykes — one of a trio with Schumer and Regina Hall – took a shot at the bill that passed a Republican-controlled state legislature earlier this month. “We’re going to have a great night tonight,” said Sykes, who is openly gay. “And for you people in Florida, we’re going to have a gay night.” Later, Chastain, best actress winner for “The Eyes of Tammy Faye,” told the crowd: “We’re faced with discriminatory and bigoted legislation that is sweeping our country with the only goal of further dividing us.”

After an opening greeting from Venus and Serena Williams, whose tennis-playing youth and life with their father is the subject of “King Richard,” the opening number was performed by none other than Beyoncé. The superstar sang her nominated song, “Be Alive,” in a dance-heavy performance from an open-air stage in Compton, where the Williams sisters were raised. Even her star power didn’t win the song an Oscar, though. It was Billie Eilish and her brother, Finneas, who won for their “No Time to Die” James Bond theme song. Finneas thanked the duo’s parents with words that brought smiles to many, saying: “We love you as parents and we love you as real people, too.”

BUT SPEAKING OF ‘KING RICHARD’ …

(You knew we had to get back to this one.) “King Richard” may not have won best song but it took the prize for Smith himself, not long after the slap heard ’round the world. A hugely emotional Smith rose to accept his trophy and began with a clear reference to what had just happened, noting that “Richard Williams was a fierce defender of his family. In this time in my life, in this moment, I am overwhelmed by what God is calling on me to do and be in this world. ..,” He also noted that Denzel Washington had told him that “At your highest moment, be careful. That’s when the devil comes for you.” He apologized to the academy and said he hoped he’d be invited back. And Hollywood clearly was expressing its love: A stream of celebrities came over to comfort Smith after his slap moment, including Washington, Keith Urban and Nicole Kidman, Tyler Perry and others.

AND SPEAKING OF ‘CODA’….

It was just that kind of night. After the emotions of the previous few hours, it seemed appropriate that “CODA” would take the final prize. (And, luckily, it WAS the final award, reversing last year’s reversal of the tradition.) Besides being a huge moment for the Deaf community, it was the first win for a streaming service; though a small movie, it had deep support in Apple TV+, which scored its first best picture prize. Later at the Governor’s Ball, the entire cast walked in and was mobbed by photographers and well-wishers, with Kotsur clutching his Oscar in one hand and happy co-star Matlin in the other.

OH YES, PARTYING WAS BACK

After last year’s distanced pandemic Oscars, partying was back with a vengeance. The audience — all vaccinated and COVID-tested, twice — packed into bars during the awards and then at the Governor’s Ball, where hardly a mask was to be seen. The main subject of conversation at the Ball was, no surprise, the Will Smith developments. “At first everyone thought it was fake,” said one guest, real estate broker Sara Roche from Charlotte, N.C. “Everyone was texting from home and saying, ‘What is going on?’” But Roche also had thoughts about “CODA,” whose win made her happy. “I’m not an emotional person and not a cryer,” she said. “But I got a lump in my throat when ‘CODA’ won.”

Oscar moments: History, glamour… and what a weird ending

Everything you need to know about the 2022 Oscars