Oscar moments: History, glamour… and what a weird ending 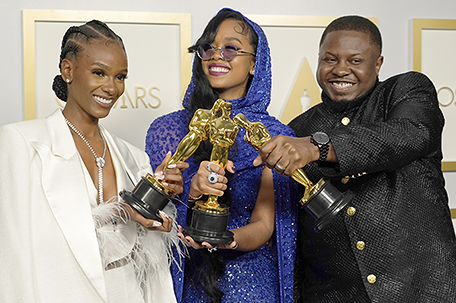 ABOVE PHOTO: Tiara Thomas, from left, H.E.R. and Dernst Emile II, winners of the award for best original song for “Fight For You” from “Judas and the Black Messiah,” pose in the press room at the Oscars on Sunday, April 25, 2021, at Union Station in Los Angeles. (AP Photo/Chris Pizzello, Pool)

If that’s what you yelled at the TV during the final moments of Sunday’s Oscars, you weren’t alone. In what may have been the most abrupt ending since that closing shot of “The Sopranos,” TV audiences expecting an emotional finale crowning the late Chadwick Boseman as best actor were left to ponder a huge upset, an absent winner, and a quick “see ya” from the Oscars.

It was one more unusual moment in the most unusual of all Oscar telecasts, one that defied convention in so many ways. Some of it was good: In a pandemic year when award shows faced unprecedented challenges, the Oscars brought back red-carpet glamour. And though many nominees weren’t able to attend in person, it was truly heartening to see those who were.

The nominees represented a huge advance in diversity, with more women and more actors of color nominated than ever before — but one oft-predicted outcome was not meant to be: a sweep of the acting categories by actors of color. Though supporting prizes went to Daniel Kaluuya (“Judas and the Black Messiah”) and Youn Yuh-jung (“Minari”), the best actor and actress categories went unexpectedly to Anthony Hopkins and to Frances McDormand, winning her third trophy in the category, for”Nomadland.”

But history was made nonetheless, especially by Chloé Zhao, the China-born director of “Nomadland” who became just the second woman to win best director, and the first woman of color.

AMID THE GLAMOUR, REAL-WORLD REMINDERS

Oscars may be about Hollywood-style escapism, but in her opening moments, Regina King kept it real. The talented actor and director of “One Night in Miami” immediately reminded the world both of the scourge of the pandemic and the scourge of police violence. “We are mourning the loss of so many, and I have to be honest, if things had gone differently this past week in Minneapolis I may have traded in my heels for marching boots,” she said, a reference to the guilty verdict against Derek Chauvin in the murder of George Floyd. She noted that some viewers prefer their Oscar ceremonies not to dwell on such things: “I know that a lot of you people at home want to reach for your remote when you feel like Hollywood is preaching to you.” But, she added, “as a mother of a Black son I know the fear that so many live with, and no amount of fame or fortune changes that, OK?”

A ‘PROMISING’ SHOWING FOR WOMEN

There was a wealth of history to be made this Oscar night, and much of it came for women. First off was Emerald Fennell, who won the night’s first award — best original screenplay — for the fierce and provocative revenge thriller, “Promising Young Woman,” her directorial debut. The busy Fennell, who also found time for an acting role in “The Crown,” became the first woman in 13 years to win a screenwriting Oscar. Fennell, who is pregnant, joked that she was also pregnant when she shot “Promising Young Woman,” and thanked her son for waiting until the shoot was over to arrive: “I was crossing my legs.”

One of the benefits of the telecast leaving more time for speeches this year — with no play-off music — was that some were deeper and more heartfelt. This was especially true of director Thomas Vinterberg, who, in a heartbreaking moment, dedicated his win for “Another Round” (international feature) to his late daughter Ida, who was supposed to be in the film but was killed at age 19 in a car crash by a driver looking at a cell phone, four days into shooting. “Ida, this is a miracle that just happened, and you’re part of this miracle,” the director said, in tears. “Maybe you’ve been pulling some strings somewhere.”

HISTORY, IN MORE WAYS THAN ONE

History had already made in the directing category before the envelope was opened. For the first time, two women were nominated, Zhao and Fennell. It was quite simply a monumental night for Zhao, the China-born director who became only the second woman in Oscar history to win the directing prize, after Kathryn Bigelow, and the first woman of color. Her lyrical “Nomadland” went on to win best picture — an emphatic triumph for the elegant filmmaker. Next up for Zhao is something very different from this film made for less than $5 million: a Marvel film with a budget around $200 million.

THANKS, MOM — FOR HAVING SEX WITH DAD!

It’s always a good idea to pay tribute to one’s Mom when winning an Oscar. Maybe not to talk about her sex life, though — especially when she’s sitting in the audience. Daniel Kaluuya gave a stirring speech when he won best supporting actor for his charismatic performance in “Judas and the Black Messiah” as Black Panther leader Fred Hampton. Waxing rhapsodic, he then said: “My mum met my dad, they had sex. It’s amazing. I’m here. I’m so happy to be alive.” His mother, in her seat, could clearly be seen asking what the heck he was talking about. Backstage, Kaluuya explained: “She’s got a sense of humor.”

Many a buddy film has triumphed at the Oscars over the years. This was presumably the first about a human and… an octopus. “My Octopus Teacher” from Netflix rode a wave of fan enthusiasm to the best documentary feature prize. With stunning visuals, the film tells the tale of filmmaker Craig Foster, who became attached to a female octopus. Noted James Reed, co-director with Pippa Ehrlich: “If a man can form a friendship with an octopus, it does sort of make you wonder what else is possible.”

Youn Yuh-jung has charmed Western audiences since she broke through in “Minari,” and the prominent South Korean actress did not disappoint Sunday as she won the best supporting actress award — only the second Asian actress to do so. In her speech, she joked about how often her name is mangled, and marveled at how she could possibly defeat fellow nominee Glenn Close. Youn, 73, also dared to tease her presenter, Brad Pitt, whose company was involved in the production of “Minari,” for not visiting the set in Oklahoma. “Mr. Brad Pitt, finally!” she said. “Nice to meet you.”

It probably wasn’t the kind of Oscar history she wanted to make: Close is now 0-8 at the Oscars, tying Peter O’Toole for most nominations without winning. Surely she will win one day, but for Sunday’s telecast at least, she had to make her mark another way. She did it with humor, in a rare comedy bit. Playing a game where Questlove would play a song and a celebrity would guess if it was ever nominated for or won an Oscar, Close was given E.U.’s “Da Butt.” In what appeared a scripted moment, she exclaimed: “Wait a second. Wait a second. That’s Da Butt.” She then jumped out of her seat and, well, gyrated her butt, providing a needed moment of levity.

CAN WE GO BACK TO THE OLD WAY?

Yet another awkward Oscar moment for Joaquin Phoenix, who seems to specialize in them. Presenting the final award for best actor, Phoenix undoubtedly expected — as did most of the rest of the world — to give the award to Boseman, rewarding the beloved actor posthumously for his superb performance in “Ma Rainey’s Black Bottom.” Indeed, it seemed as if the award order was changed, with best picture presented before best actress and actor, to capitalize on the expected emotional impact. Instead, Hopkins (also deserving, of course) won the award, and since he wasn’t there, it lent a bizarrely abrupt ending to the proceedings … a la the cut-to-black in “The Sopranos”. So …next time, can we go back to the old order, please?

A complete list of all the winners at the 2021 Oscars

International film: “ Another Round,” Denmark

Animated short film: “If Anything Happens I Love You”

Original song: “Fight for You” from “Judas and the Black Messiah”