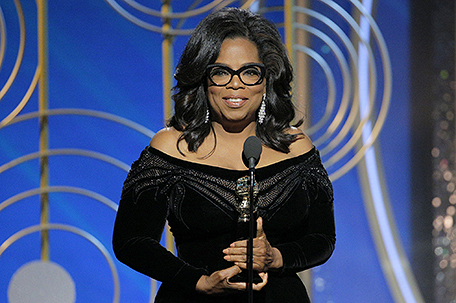 A year after politics — and the newly elected occupant of the White House — dominated the conversation and tone of the Golden Globes, there was barely a mention of such things at Sunday’s ceremony. This year, it was all gender politics, and of course the #MeToo movement that has engulfed Hollywood and spread into the culture at large with astonishing speed. From the sea of glittering black gowns worn in solidarity on the usually multi-colored red carpet, to sly references to unequal pay and recognition for women, to Frances McDormand’s salute to “a tectonic shift” in the Hollywood power structure, it was a night for reckoning — crowned by Oprah Winfrey’s barn-raiser of a speech proclaiming “Their time is UP!”

Usually, red carpet interviews focus on the provenance of designer gowns and jewelry. This year, there was talk of working conditions for farmers and janitors, and demands for equal pay across society. Several actresses, including Meryl Streep, Michelle Williams and Emma Watson, brought social activists with them , to focus on real-life solutions to gritty problems far from Hollywood. “We feel emboldened in this particular moment,” Streep said, “to stand together in a thick black line dividing then from now.” 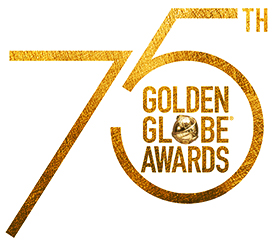 It was a night of unusually powerful speeches, whether long or short, that touched eloquently on the #MeToo moment. One came from Laura Dern, who won supporting actress for “Big Little Lies,” a TV series that, aptly, depicts not only sexual abuse, but a group of women who only fully discover their power when they unite. Using her character to describe a past culture in which people were afraid to speak out, Dern urged Hollywood to support and employ survivors brave enough to come forward. And she went further: “May we teach our children,” she said, “that speaking out without the fear of retribution is our culture’s new North Star.”

A SLY NOD TO A GLARING OMISSION:

One of the most glaring snubs in this year’s movie nominations came in the best director category, where Greta Gerwig was passed over for her much-loved “Lady Bird.” Natalie Portman, presenting the director prize, was not about to let that go unnoticed. “And here are the all MALE nominees,” she quipped, to knowing laughter. (Guillermo del Toro won for “The Shape of Water.“) Barbra Streisand also took a jab at the Globes, noting that she’d been the only woman to have won best director — in 1984. “That was 34 years ago, folks. Time’s up!” she said.

A big winner was “Three Billboards Outside Ebbing, Missouri,” in which Frances McDormand plays a mother taunting police to solve the rape and murder of her daughter. Winning for best actress , McDormand noted to the crowd that “I keep my politics private. But it was really great to be in this room and to be part of a tectonic shift in our industry power structure.” And she added: “Trust me: The women in this room tonight are not here for the food. We’re here for the work.”

But with all the eloquent speeches, none roused the room like Winfrey’s, who had the crowd giving her repeated ovations as she issued a warning — not once, but three times — to powerful men who abuse women: “Their time is up! ” She ended her barn-storming speech, in which she accepted the Cecil B. DeMille lifetime achievement award, with a call to young girls. “I want all the girls watching here and now to know that a new day is on the horizon!” she said. “And when that new day finally dawns, it will be because of a lot of magnificent women … and some pretty phenomenal men, fighting hard to make sure that they become the leaders who take us to the time when nobody ever has to say, ‘Me too,’ again.” Director Ava DuVernay later wrote on Twitter that the room was “still vibrating like electricity from that speech.” 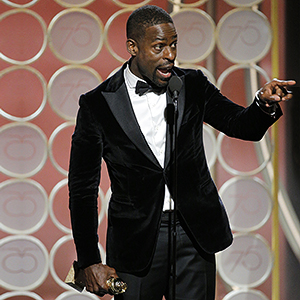 Sterling K. Brown accepts the award for best actor in a TV drama series for his role in “This Is Us,” at the 75th Annual Golden Globe Awards in Beverly Hills, Calif., on Sunday, Jan. 7, 2018. (Paul Drinkwater/NBC via AP)

While most of the talk was about progress in the sphere of gender, actor Sterling K. Brown of TV’s “This Is Us” addressed progress of a different kind: he was the first Black actor to win the Globe for best actor in a TV drama. He thanked the show’s creator, Dan Fogelman, for writing a role “for a Black man that can only be played by a black man.” What he was grateful for, Brown said, is that “I’m being seen for who I am and being appreciated for who I am, and it makes it that much more difficult to dismiss me or dismiss anybody who looks like me.”

CALLING OUT A NETWORK, ON EQUAL PAY:

There’s been much talk about equal pay lately, but Debra Messing and Eva Longoria got very specific, calling out E! Entertainment Television on the issue while doing interviews with them on the red carpet.

Messing referenced the recent departure from E! of host Catt Sadler, who has said she was making about half the pay of her male counterpart, Jason Kennedy.

“I was so shocked to hear that E! doesn’t believe in paying their female co-hosts the same as their male co-hosts,” she said. “I miss Catt Sadler.”

Longoria also made the point, to Ryan Seacrest. “We support gender equity and equal pay and we hope that E! follows that lead with Catt as well,” she said.

On an evening recognizing women in Hollywood, it was certainly apt to have Thelma and Louise, aka Geena Davis and Susan Sarandon, present an award. Davis — who is a longtime advocate for gender equality in film — joked cynically that the two had already “fixed everything.” She also noted that the men in the category they were presenting had agreed to give half their salary back “so the women can make more than them.”

She was joking there, too.

Guillermo del Toro, who won best director at the Golden Globes, had to hush the orchestra after they began playing shortly after he started his acceptance speech.

He won for the Cold War-era fantasy “The Shape of Water.” The film stars Sally Hawkins as a mute cleaning lady who falls in love with an amphibious creature kept confined in a government lab.

The emotional Mexican-born filmmaker’s acceptance speech was an ode to his love affair with monsters.

He thanked the film’s cast, before continuing: “My monsters thank you.”

Del Toro later tweeted a photo of an In-N-Out drive-thru menu board with the caption “After the globes celebration.”