One night only –The Jacksons perform at Parx Casino Xcite in Bensalem Sept. 10 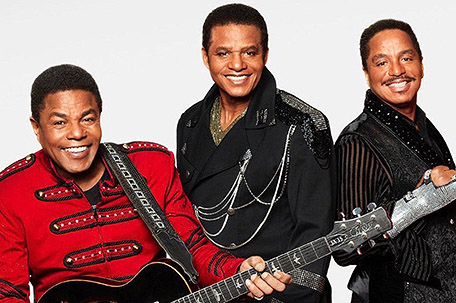 This special production will also benefit the Universal Family of Schools to help students and scholars in underrepresented areas of Philadelphia achieve their career and academic aspirations.

Music legends The Jacksons — Marlon, Tito, and Jackie, to be exact — will take over the state-of-the-art stage at the Xcite Center for their only concert date scheduled on the East Coast this fall.

“We do a lot of dates out of the country, and we’ve been blessed to have a brand that is internationally known,” Jackson said. “That’s a true blessing.”

Over the years, the Jacksons have performed around the world, in cities and countries such as Tunisia, Belize, France, London, Germany, Russia, Australia, Brazil, Chile, Copenhagen and many more.

“And [the list of places] just goes on and on and on,” Jackson continued. “And Cairo, Egypt — I think we have a show coming up there in front of the pyramids. So it’s nice to experience the various cultures the world has to offer, which gives you a totally different perspective — not just on life, but the world and where America stands throughout the world. It’s pretty different, but it’s great, and nice to see that your music has reached all the various territories around the world, and the people love the show. So we’re very thankful and grateful for that.”

As for the show on September 10 at Parx, concert goers can expect a party, on and off the stage.

“We’ll be there and we’re going to try to do as many of our hit records as possible and have a great time and to have a party on the stage — a Jackson party on stage — that’s what we try to do,” Jackson said.

Although they have performed in various cities, states, and countries throughout the decades, Philadelphia is special to him, Jackson said.

“Show You the Way to Go” and “Enjoy Yourself” written by Philadelphia’s Kenny Gamble and Leon Huff are two of his favorite songs to perform, he said.

“We still keep in contact with Kenny Gamble,” Jackson said. “Gambs is what we call him. I think he might be at the show.”

The group would stay in Camden, New Jersey, and then drive into Philadelphia to work on the albums at Sigma Sound Studios.

But the Jackson 5, even prior to signing with Motown, would come to Philadelphia to perform, Jackson recalled.

We used to do the Uptown Theater, and Jimmy Bishop and Georgie Woods and all those guys used to put on the O Jays, The Emotions, us, Skip Sunny, the Pace Brothers.  We were all trying to make it back in those days. Trying to make a name for ourselves. So yeah, we have a connection with Philadelphia. Definitely,” Jackson said.

And as lifelong Philadelphian fans will attest, the feeling is mutual. This has not gone unnoticed by the family, Jackson said.

“I want your readers [our fans] to understand that we do appreciate them and thank them for their support throughout the years — the many years that they have been supporting the Jackson 5, The Jacksons, the Jackson family, my siblings, and we do not take it for granted because, without them, we wouldn’t be where we are today,” he said. “So we do love it. We do enjoy it. We do appreciate it. And we thank them for it.”

Jackson also mentioned that, in a way,  performing with his brother (Michael) “never really stopped.”

Marlon, Tito, and Jackie were the original members of the legendary Jackson 5. Later, they performed across the world with brothers Jermaine, Michael and Randy. They gained much success as The Jacksons, becoming Rock and Roll Hall of Famers and earning the title of “pop royalty.” The group received a star on the Hollywood Walk of Fame in 1980, and in 1999 was inducted in the Vocal Group Hall of Fame. Perennial fan favorites from that early Jackson 5 era include “ABC,” “I Want You Back” — which was their first big hit —and “I’ll Be There.”

“It didn’t stop,” Jackson said. “It’s just that most of it [the touring] is out of the country and there’s a big world out there. “A lot of people in Abu Dhabi and Dubai and places like that want you to come visit them. The Philippines, South Korea and places in Japan and Tokyo, China, Hong Kong — they enjoy the music, they love it, and we’re just glad that they’re coming out to see the show. Even children, they’re singing the songs — and they weren’t even born. They tell us that their mom and dad grew up on the Jacksons’ music and they really love it themselves. It’s evergreen music. It’s good family-oriented music. So I think that’s probably the key.”

According to Parx spokesperson Kory Aversa, The Jacksons recently celebrated their 50th anniversary as “one of the most successful groups in music history.”

“Parx Casino is honored to welcome legends and hit-makers The Jacksons to the Xcite Center,” said  Carrie Nork Minelli, who is the Parx Casino director of advertising and public relations. “This show also continues our tradition of supporting Universal Family of Schools with their important work with youth in our region. Stay tuned for more big names and more community partnerships coming this fall and into next year.”

Doors will open at 7 p.m. and tickets for the concert at the Parx Casino range from $55 to $95 for the 8 p.m. show. Other coming shows this fall at Parx include Nelly, Deon Cole, Ben Folds, Blues Traveler, Elvis Costello and the Imposters, Blondie, Jo Koy and Friends, Brett Eldredge, Jay Leno, Brian McKnight, Ken Jeong, 3 Doors Down, Ron White and more. For ticket information, visit: www.parxcasino.com/bensalem/xcitecenter.

CCP and Parx Casino work to eliminate barriers, build on the strengths of Philly’s students