“One Night In Miami”: A Review 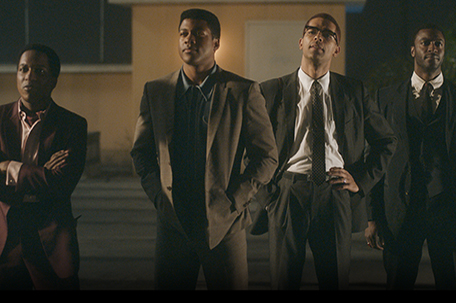 What happens when four, well-known Black men, each a celebrity in their own right, converse on the state of blackness in the height of the Civil Rights era? The answer in short — an epic night.

Amazon Studio’s “One Night In Miami” is centered around the fictionalized events that took place during the night of Muhammad Ali and Sonny Liston’s heavyweight match on February 25, 1964 at the Miami Beach Convention Center.

Adapted from Kemp Powers’ stage play of the same name, “One Night In Miami” is the feature directorial debut of the phenomenal Oscar and Emmy Award-winning actress Regina King. The film premiered at the Venice Film Festival in the fall of 2020 — a milestone and first for a Black woman director.

Shot in Louisiana, the film begins by giving the audience a glimpse of the foursome’s life prior to their meeting. In those individual scenarios, each character and their interactions with the world as Black men is front and center, especially in terms of their existence in and with white America.

The large majority of the film takes place at a room in the Hampton House Motel, in the Brownsville neighborhood, which catered to Black celebrities. In that room, away from the gaze of the rest of the world, the four openly and honestly discuss the harsh reality that no matter how big their celebrity, or how impressive their accomplishments, white America still deemed them as less than.

Despite those limitations, Brown, Clay and Cooke question whether or not they should use that celebrity to speak out on behalf of the Black community. To understand just how profound that notion is, one must look at the fact that each of these men were at the height of their lives and careers respectively at this time.

Clay, who would soon join the Nation of Islam and change his name to Muhammad Ali, had just won the heavyweight championship of the world at 22, Jim Brown was dominating in the NFL on the Cleveland Browns as a Hall of Fame athlete, Sam Cooke was one of the biggest singers in the country with 30 top 40 hits in the U.S. between 1957 and 1964 and Malcolm X was leading an entire movement for the advancement of Black people. None of this shielded them of any of the burdens that accompany blackness in a country rooted in racism.

The parallels between Malcolm X’s move to leave the Nation of Islam at the same time his mentee Ali was becoming involved, also served as an interesting dynamic. The conversations in this film are necessary, jarring and triggering for many that have had similar experiences… but necessary, nonetheless. In truth, the heated discussions that take place in this room are just as relevant today as they were in 1964.

“One Night In Miami” not only addresses the harsh aspects of life for Black people in America, it also shows Black people, particularly these four legendary Black men letting their guards down to be present. It’s enjoyable to see the comradery of these four friends as they share drinks, laugh and tease one another. These figures that we have usually only seen through the lens of their power and abilities, are seen as people… enjoying life and each other.

The casting and performances in this film were equally enjoyable. Goree embodies the charm, humor and timbre of the late great Ali. Kingsley Ben-Adir gives a stoic portrayal of Malcolm. Hodge offers a pensive and unwavering fortitude as Jim Brown and Odom’s performance as Sam Cooke is mind-blowing. His rendition of “A Change Is Gonna Come” filled with rage, determination, vulnerability and a glimmer of hope, is among one of the best in movie history.

Sam Cooke was killed in a motel altercation later that year and Malcolm X was killed a just year later, making the performance of “A Change Is Gonna Come” an even more poignant ending to the film.

“One Night In Miami” serves as an ode to these four men who sacrificed so much to contribute to Black culture and society as a whole.

The film is brilliantly done and is one of many incredible films that King will no doubt go on to direct.

“One Night In Miami” will be available to stream exclusively on Amazon Prime Video on January 15.

Regina King introduces ‘One Night in Miami’ to Oscars race