One Day, Two Productions: Playwright Derrell Lawrence Brings ‘Life Isn’t Fair’ and ‘I Love You To Death’ To Philadelphia 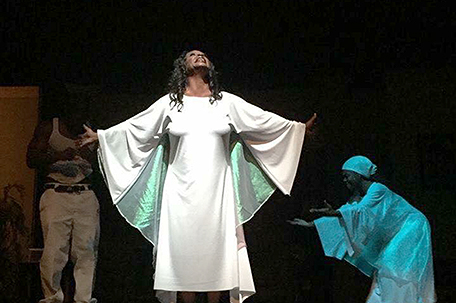 Life can be very unpredictable. Sometimes that means lives are turned upside down in an instant.

Philadelphia native Derrell Lawrence experienced this first-hand. After his sister LaKeesha was killed in a murder-suicide at the hand of her significant other, Lawrence began writing about his pain and struggle to cope with his loss.

Derrell Lawrence created “Life Isn’t Fair” in 2000. The title was a direct reflection of his attempt to process the tragic loss of his sister.

“When my sister passed away, I really felt as if life wasn’t fair, so that’s how the writing came about,” he said. “It was just me putting my thoughts and my feelings on paper. I didn’t know it was going to turn into this. It didn’t start out as a story;  it was just therapy and me writing how I felt about what was going on in my life at that time.”

Those thoughts and feelings eventually became “Life Isn’t Fair” the film. After winning a number of awards — including the “Highest Achievement for New Filmmaker” at the Jokara-Micheaux Film Festival, as well as “The Silver Award” and “The People’s Choice Award” from the Philadelphia International Film Festival — “Life Isn’t Fair” was adapted into a stage production for its second iteration and was performed for the first time in 2015.

“I always loved the energy and the interaction you get with a live audience that you cannot get with the audience of a film,” Lawrence said. “The original cast of “Life Isn’t Fair” the stage play included Lawrence, John Canada Terrell, Matthew Nadu, and Grammy-award winning singer and songwriter Regina Belle.

The stories that Lawrence shares on the stage are complex in nature and deal with themes of love, loss and perseverance.

“Life Isn’t Fair is about the journey of a young man just coming back into society after being incarcerated for the past 13 years,” he said. “He comes back to his neighborhood with a better outlook on life. He is trying to become a positive fixture in society. He gets a job, falls in love and is trying to stay on the straight and narrow. As soon as you think that he’s finally understanding life, there’s another fork in the road that he has to face, and it’s very damaging.”

“I Love You To Death” serves as a cautionary tale for anyone unaware of what it means to be in an unhealthy relationship.

The play is about a couple involved in a domestic violence situation. The husband appears to be this nice guy around his family and friends, but the truth is that he loves maintaining control over his wife. Whenever he feels like he doesn’t have control, he uses intimidation and lashes out physically,” Lawrence said. “It’s the kind of play that when you see it, anyone that thinks it’s ok to put their hands on women will definitely think twice about ever doing it again. The message is clear — it is not ok to allow a man or anyone hit you.”

As someone whose journey to becoming a playwright, actor and producer began organically, Lawrence explained what he believes makes his work special.

“The stories that I write are very relatable to a lot of people and I believe that’s the key to what captivates them,” he said. “My stories draw you in and people can feel for and identify with the characters. It’s like watching the life of someone you know. That’s the reason I feel that my writing has stood out from a lot of other playwrights… I do my best to write from the heart.”

“Loyalty to my cast mates was the reason”, he said. “There have been so many actors that have worked with me for years. When I wrote “I Love You To Death,” I only had eight characters and I was trying to figure out who I was going to cast.  I didn’t want to leave anyone behind. I decided to do two different shows and include everyone in the Lawrence Theatre company to perform on the same day.”

Derrell Lawrence will continue to produce material from the heart that will resonate with audiences for years to come. Fans of his work can look forward to a production of his original stage play “The Funeral” May 1 -19.

Under the direction of Damien Wallace, performances of “I Love You To Death” and “Life Isn’t Fair” will take place on Saturday, January 11 at 3pm and 7:15pm, respectively, at the David L. Kurtz Performing Arts Center, located at 3000 W. School House Lane. Tickets are available for purchase at www.lawrencetheatrecompany.org.

Tavis Smiley brings “Death of A King: A Live Theatrical Experience” to the Merriam Theater

Salli Richardson-Whitfield on her new drama, “I Will Follow” a reconciliation of life and death