Omar describes life as a fearless fighter in new memoir 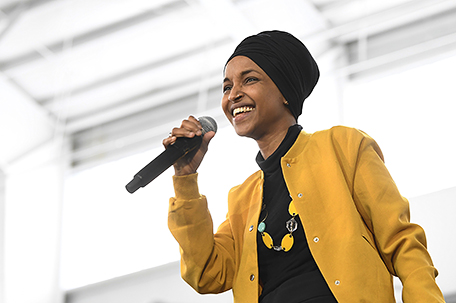 ABOVE PHOTO: In this Feb. 29, 2020 file photo, U.S. Rep. Ilhan Omar, D-Minn., speaks at a rally in Springfield, Mass. At a young age, Rep. Omar earned a reputation as a fighter — a bit of a misfit who saw fighting as a way to survive and earn respect. In her new memoir being released Tuesday, May, 26, 2020. Omar provides details about her life, as she went from a refugee and immigrant to congresswoman for Minnesota. (AP Photo/Susan Walsh File)

MINNEAPOLIS — Democratic Rep. Ilhan Omar’s metamorphosis from refugee to the first Somali-American in Congress has been well-documented. Now, Omar is out with a new memoir that offers her own spin on her path to prominence, starting with her childhood in Mogadishu. “This is What America Looks Like: My Journey from Refugee to Congresswoman,”which was released on Tuesday, offers no revelations on some of the controversies that have dogged Omar. Instead, it sketches rugged years that Omar says made her a fearless fighter, unafraid to skirmish with President Donald Trump and her frequent conservative critics.

In her memoir, written with Rebecca Paley, Omar recounts taking on a much taller boy when she was just 7, rubbing his face in the sand after he picked on someone weaker.

“I wasn’t afraid of fighting. I felt like I was bigger and stronger than everyone else — even if I knew that wasn’t really the case,” she wrote. It’s a theme woven throughout the book, including after she arrived in America and settled in Arlington, Virginia, knowing almost no English.

Omar got into fights in middle school to show she wasn’t afraid, she writes, and she describes incidents in which she choked one boy until he foamed at the mouth and kept hitting another girl even after being told the girl was pregnant.

“Fighting didn’t feel like a choice. It was a part of me. Respect goes both ways,” she wrote.

Omar said she grew up the youngest of seven in a loud, opinionated middle-class family, living in a guarded compound in Mogadishu. Her father’s clan was one of the country’s most powerful, and her mother, who died when she was in preschool, was Benadiri, a Somali ethnic minority. Omar, who described herself as a tomboy, said the only place she fit in was within the walls of her family home. Civil war broke out when she was 8, and after her family’s compound came under attack by militia, the family escaped and eventually made it to a refugee camp in Kenya, where Omar spent four years before the family moved to the U.S.

Omar recounts meeting her first husband, Ahmed Hirsi, in Minneapolis when she was 16. She said they were in love, and shortly before she turned 19, their families decided they should marry.

By 2008, Omar was struggling. Finances were a stressor, she had two small children, and she began questioning her relationships, including her marriage. Since the couple had married religiously – not civilly — to get divorced, Hirsi had to simply declare the marriage ended, Omar wrote.

She then had what she called “a Britney Spears-style meltdown” in which she shaved her head and eloped with a man, Ahmed Nur Said Elmi, whom she wrote she “spent so little time with that I wouldn’t even make him a footnote in my story if it weren’t for the fact that this event turned into the main headline later on.”

In the book, Omar doesn’t name Elmi or say how they met or when their relationship ended. She later reunited with Hirsi and had a third child. Her book also doesn’t mention her recent divorce from Hirsi and new marriage to a man who works as a consultant for her.

Since Omar ran for state lawmaker in 2016, she has been met with allegations that Elmi, the man she married during her split from Hirsi, is her brother. Omar again denies those claims, saying they originated from a post in an online Somali discussion forum that she said was a last-ditch effort to sink her campaign.

“That Somalis were some of my harshest critics might seem absurd. But they refused to accept me because I refused to kiss the ring. It goes back to my inability since childhood to submit to bullies,” she wrote.

Omar was elected to the state Legislature in 2016, knocking off a 44-year incumbent. She describes a statehouse “hostile to my presence” because of her determination to attack the status quo, and recounts confronting a fellow Democratic lawmaker unhappy she’d won a leadership position.

The lawmaker told Omar she was different, and eventually said it was because she walks into a room “like a man.”

As a congresswoman, Omar has come under fire for controversial statements, and has been the subject of attacks and falsehoods by critics. She said in her book that she defends her policies, and her identity is not up for debate.

Pirro’s show not on Fox lineup, week after Omar comments