Off To See The Wizard (World) 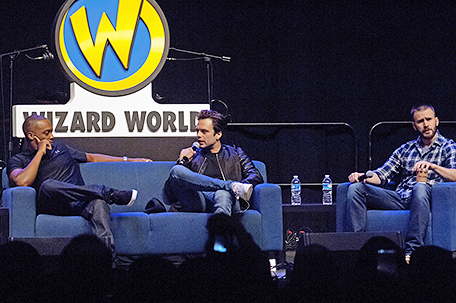 In movies like The Avengers, Loki, the God of Mischief is dressed in a green coat, an ornate brass headdress, and carries a scepter in his hand.

But on Saturday, The God of Mischief had come to the Pennsylvania Convention from Pittsburgh in the form of Courtney Clemm. Sure, it was a five-hour drive on the Pennsylvania Turnpike for her and her friends to get to Philadelphia, but Clemm believes it was more than worth the effort.

“Did you see the lineup?!” Clemm said excitedly. “We had to be here!”

The all-star lineup of stars from movies and television shows including Captain America: Civil War (Chris Evans, Sebastian Stan and Anthony Mackie) Thor (Chris Hemsworth and Tom Hiddleston), the Back To The Future series (Michael J. Fox, Lea Thompson and Christopher Lloyd), “Arrow” (Stephen Amell) and “Agent Carter” (Hayley Atwell and Dominic Cooper) attracted people from as far away as Iowa to the convention center for the annual celebration of all things comics.

In addition to seeing the stars of your favorite movies and television shows up close and personal, Wizard World also offered workshops on how to cosplay (dress in the costume of your favorite comic character) effectively, how to draw your favorite characters, ways to get your idea for a book on paper and onto bookstore shelves, and how to turn your geeky passions into a business.

There were also a series of workshops on how the comics have addressed social justice issues like the Civil Rights Movement, same-sex marriage, and immigration and how protests against stereotypes in comics have led to the current movement toward diversity in the medium.

But the showcase of the convention was a marketplace that had something for everyone from the hardcore comic book fan to the casual fan whose interest goes only as far back as the movie Deadpool.

Sitting at a table surrounded by their science fiction creations, Carlton L. Sampson and Wacobake Willis, both of North Philadelphia, talked about their experiences at the show. Sampson was a poet and Wills an artist who saw a need in the comic book marketplace for more diverse characters and decided to create a “righteous multiverse” of diverse characters based on the elements of the universe, or as they’re commonly known, Earth, Wind, Fire and Water.

It was their second year at Wizards World, and they said they’d be back for a third. 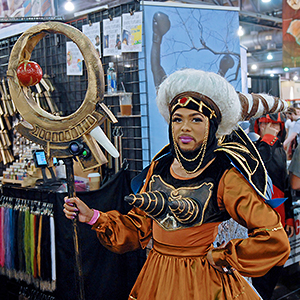 Wizard World guest and fan Courtney Clemm as ‘Loki’ the God of Mischief from Thor. (Photo by Bill Z. Foster)

“The response to our books has been largely positive,” Sampson said. “A lot of people seem to like them.”

While you could meet comic book illustrators and creators like Victor Dandridge, Asaad Loiseau and Eric Bryant on the convention floor, the marketplace also gave serious fans the chance to buy the things they need for effective cosplaying, rare and recent comic books, and t-shirts from their favorite heroes as a DJ spun tunes including the theme from the “Spider Man” cartoon as interpreted by crooner Michael Buble,

That’s what brought Guy Cannon of Overbrook Park to Wizards World. He came to the convention dressed as one of Batman’s foes, The Riddler, in search of new additions to his action figure collection.

“It requires less makeup than The Joker,” he said. “I love this costume and the character of The Riddler because while he’s not a physically strong man, he’s an intellectual match for Batman.”