Off-camera at the Globes with Roberts, Ali, Theron 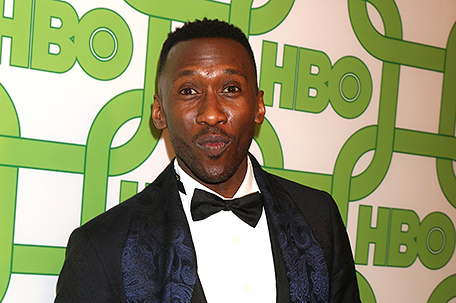 By Beth Harris and Lynn Elber

BEVERLY HILLS, Calif. — It’s not only who wins or loses at the Golden Globes, but how stars occupy themselves during the three-hour-plus ceremony and manage to navigate a packed ballroom.

Here’s a glimpse at what happened off-camera during Sunday’s awards at the Beverly Hilton Hotel.

Mahershala Ali’s timing was a bit off early in the evening.

The star of “Green Book” got stuck at the back of the International Ballroom during the show’s first commercial break. He stood waiting for a chance to return to his seat when a security guard urged everyone to move along.

Ali and his wife were among the last to arrive into the ballroom after the show began. They hesitated before entering the so-called pit, where the biggest stars and nominees are seated at the front of the stage and in view of the cameras.

In the end, the Oscar-winning actor was in the right place at the right time.

He won best supporting actor for his role as an African-American concert pianist in the 1960s. It was one of three awards won by “Green Book” from its five nominations.

When Julia Roberts and Emmy Rossum summon you, you jump.

The actresses were chatting during a break in the ceremony when they spotted Sam Rockwell.

“Sam!” they called out in unison. He rushed over, first offering a “How are you, man?” to Roberts’ husband, cinematographer Daniel Moder, who was patiently standing by.

Patricia Arquette, her best-actress award for the miniseries “Escape at Dannemora” cradled in her arm, joined the circle and got congratulatory hugs from Roberts and Rossum.

Charlize Theron was ushered into a crowded women’s restroom at the back of the ballroom, cutting ahead of a long line and apologizing along the way.

The nominated star of “Tully” found Regina King standing at the sink and the actresses hugged.

“You look so beautiful,” Theron told King, who won supporting actress for her role in “If Beale Street Could Talk.”

Theron took a bottle of eye drops out of her tiny black clutch and reapplied her lipstick before she was hurried out of the restroom.

Rosamund Pike had no such escort. The nominated star of “A Private War” got in a long line like everyone else during a commercial break.

“Is it moving quite fast?” she asked.

Assured that it was, Pike waited her turn.

McCarthy proved a good sport when approached by attendees seeking selfies with the “Can You Ever Forgive Me?” star.

She wasn’t the only one asked to pose by star-struck audience members, who may work in entertainment or were just lucky enough to have a connection.

Richard Gere, waiting in the back of the ballroom for a commercial break to return to his seat, was approached by one eager fan who told him she was visiting from Germany.

“If we can do it super quick,” he said, obliging her.

Daniel Craig was equally polite to another admirer but just said no.

He did pose for a selfie with Idris Elba, speculated about as Craig’s possible successor as James Bond. Posted online by Elba, it shows the actors trading suspicious glances and is labeled with a cryptic “Awks….”

Kaley Cuoco’s husband knew his role and played it well.

Karl Cook, who married “The Big Bang Theory” actress last June, held the train of her black and white gown as they threaded their way through the crowd and into the ballroom before the show.

It was a critical job: More than one actress was stopped in her tracks when someone inadvertently stepped on a flowing gown.

NO SOUP FOR YOU

A gourmet dinner awaited each guest, but not for long. The efficient staff had about an hour to serve three courses and then whisk the dishes away, eaten or not, so meal time would be over by show time.

Stars who lingered for photographers on the red carpet missed out on sweet potato vichyssoise.

The soup went uneaten at the “A Star is Born” table. Lady Gaga’s arrival close to show time lessened the odds of her getting even a bite of the Chilean sea bass course or pistachio cream cheese cake.

Celebrities weren’t left entirely high and dry: the wine and Champagne kept flowing, and there were snacks and cocktails available in the bar area.

By evening’s end, the plates of cold cuts, sandwiches and desserts were empty.