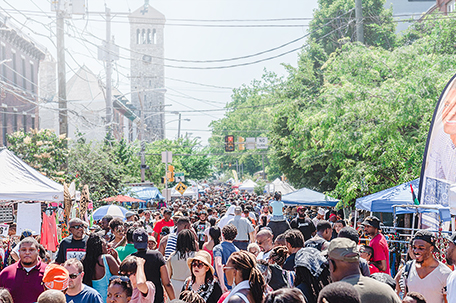 The enormous festival, which began in 1975, takes over a dozen-block radius in the Graduate Hospital neighborhood, gathering hundreds of vendors from around the world.

Odunde is a Yoruba word that means “Happy New Year.” Every year, the Odunde Festival draws vendors from not only America, but from an array of African and Caribbean countries as well.

Headquartered in Graduate Hospital, streets will be blocked off to make way for the thousands of visitors slated to pass through the neighborhood.

The food is a huge attraction at Odunde, with a variety of vendors rarely seen at other regional festivals serving all sorts of African, Caribbean and soul food.

More than 100 area vendors sell everything from crafts, clothing, jewelry and more at the neighborhood event. Beyond shopping from local vendors, the festival’s authentic African marketplace promises shoppers items from countries in Africa, the Caribbean and South America.

An array of live music and performances also takes place on designated stages throughout the entire day.

The festival stretches for 10 blocks along South Street and Grays Ferry Avenue.

Odunde is the creation of its South Philadelphia founder, Lois Fernandez, who launched the festival after visiting similar celebrations in Africa. The concept originates from the Yoruba people of Nigeria, West Africa, and celebrates the coming of another year for African Americans and African people from around the world.

ODUNDE, Inc. is an educational and cultural organization that also sponsors year-round programs featuring the African Diaspora, in addition to  the annual Odunde Festival.

For more information on the Odunde Festival, visit: www.odundefestival.org