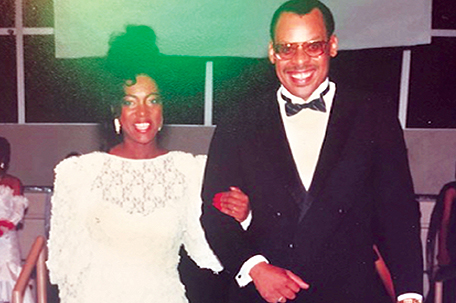 On the day the photograph on the right was taken, you couldn’t tell Tamlin Henry and I anything. We knew we were looking good. Cheryl Ann Waddlington, a local fashion Diva, was hosting a Mr. and Ms. African American Philadelphia beauty pageant and Tamlin Henry and I were selected to be the co-hosts for the event. This was in the mid 80s. Oh, what fun we had getting dressed and made up by professionals for the occasion!

Henry and his wife moved from Philadelphia over 15 years ago, landing in North Carolina where he lived until his passing on June 9, 2020.  Having worked at a number of radio stations over his broadcast career, WDAS AM/FM was one of his last stops in the business. He got his start in radio at a radio station in Sacramento, California. He then moved on to be a program director at a radio station in Seattle Washington.

He came to work at WDAS in the early 80s and worked there for almost 15 years. During that time, Henry was a news anchor, a reporter and a talk show host. From the day he arrived in Philadelphia from Seattle, Washington, until the day he left Philadelphia, Henry was beloved by so many.

He had a warm and energetic personality and people flocked to him like a bumblebee to a flower. He was always kind and patient, a consummate newsman and a sports lover.

To some, he was known as “Uncle Tam” and by many others, he was considered a brother. As for me, I definitely considered him my brother. He was my colleague at work by day, and by night, my brother and close confidant and friend.

When I first got married, Henry and the late E. Steven Collins, (another WDAS radio icon), both declared to my then husband, ”If you ever hurt her, you’ll have to answer to us.”

Henry was the kind of person that when he was assigned to travel to Senegal and the Gambia, along with a large group of WDAS listeners, he explored more than just the general tourist sights that one would opt to see. He was so daring that he welcomed an invitation to stay overnight in a hut out in the wilderness with a tribe of Senegalese friends he had made. Everyone else stayed in the luxury of their hotel rooms. But that was the kind of man that Tamlin Henry was.

After settling in, in North Carolina, for a time, Henry continued to work in radio, at one station, doing two jobs. He worked as an advertising sales representative, and he doubled as a gospel music D.J. before illness took him away from the career that he treasured.

He passed away at home with his wife at his side, after being in home-hospice care for the last year, and after a more than five-year battle with dementia.

Tamlin Henry is survived by his loving wife DeVera Henry, two sons, and several grandchildren. He was cremated in North Carolina on June 10, 2020.