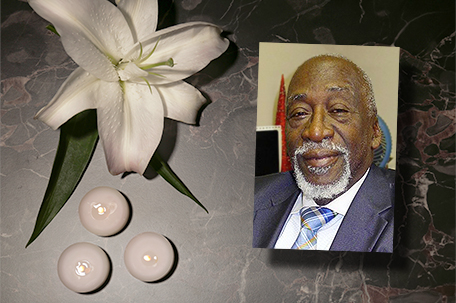 Donald Gardner was born on May 9, 1931 to Raymond and Naomi Gardner and made transition on September 4, 2018. He was educated in the Philadelphia Public School System. Although he had no formal training in music, Gardner had an innate musical ability and became an accomplished drummer and singer. He learned to sing gospel in church and taught himself to play the drums. Gardner began his musical career as a 16-year-old from North Philadelphia in the 1940s, when he started sneaking into local jazz clubs to sing. Those clubs became his music school. Philadelphia jazz vocalist Dottie Smith taught him to play the cocktail drum and iconic drummer “Philly Joe” Jones introduced him to the sock cymbal.

From 1946 to 1974, Gardner evolved into a renowned recording artist. In the 1950s, he started his own band, the Sonotones, giving starts to organist Jimmy Smith, who made the Hammond organ a jazz staple, and to saxophonist Grover Washington Jr.  Gardner was a regular on the “Chitlin Circuit” and enjoyed success in the U.S. and abroad where he toured with several artists including Sam Cooke, the Drifters and the Shirelles.

He later partnered with Dee Dee Ford and went on to earn international renown as a rhythm & blues singer and drummer with their 1962 Top 20 hit, “I Need Your Lovin’,” which he co-wrote and was later recorded by Otis Redding and Tom Jones. Gardner’s success continued as a solo artist and while partnering with Baby Washington in the 1970s. His son, Darryl Baynes, remembers visiting Sigma Sound Studios when Gardner was recording with Washington and joining his father on the road when he was managing Curtis Mayfield. “It was far from glamorous,” Baynes recalled. “It was a very hard life, traveling around playing music. Sometimes a lot of people would show; sometimes not a lot of people would show.”

By age 40, he’d sold his drums and for the most part, stopped performing. However, Gardner continued his career in music as an artist and repertoire (A&R) manager and night club owner into the 1980s. While visiting Pittsburgh, Gardner advised a young George Benson to try out as a guitar player for the Jack McDuff Quartet.

“I believed I had no chance on getting that gig, but Don was confident,” Benson wrote in an email to Gardner’s family, adding that Gardner practically chased him to the tryout. “I got the gig. I was 19 years-old, and that was the beginning of a career I could never have imagined.”

Gardner always fostered emerging talent, first as a band leader, then as a manager, and finally at Philadelphia’s Clef Club of Jazz & Performing Arts, founded in 1935 as a social club for the American Federation of Musicians Local 294 — organized by Black musicians who were excluded from the white union local — and grew into a center for music performance and education. Since jazz was his first love, it was only natural that Gardner became Board President of the Clef Club in the early 1990s.

The Clef Club was his passion since its mission is to preserve the legacy of jazz and help young jazz musicians hone their skills. During his time with the Clef Club, he served as executive director, president, operations manager and facilities manager. Gardner was a fixture at the Clef Club and was known for his kind, yet no nonsense approach. He shared his talent, wisdom and vision with his musical family at the Clef Club everyday possible, right up to the last days of his life.

Dr. Kenneth Scott, CEO of the Beech Companies and Board Chairman of the Philadelphia Clef Club of Jazz & Performing Arts reflected on Gardner’s commitment and exceptional mentoring skills. “Don was a great managing director of the Philadelphia Clef Club of Jazz & Performing Arts. To say he loved the Club was an understatement. Don was like the brother, uncle, father and grandfather figure to so many musicians from around the world. Always giving good advice on music and life. He loved seeing the kids in the music education program go from making noise to becoming performance ready musicians with many being awarded scholarships to Berkley and Julliard, and those who have become professional musicians. I will truly miss my friend.”

Gardner’s gold records on the walls of the Clef Club were proof to a new generation that it’s possible to build a career in music. Jazz musician Orrin Evans said that growing up he never questioned whether it was a viable way to make a living, in part because of Gardner and the Clef Club. Recently, Evans has been listening to Gardner’s old records and was surprised at how soulful the singing was. “I wish some people would go back and check it out more,” he said. “It’s some great music that kind of slipped through our fingers.”

Gardner was preceded in death by his parents; his wife Camilla; his wife Sally; a son Stuart; and siblings Maxwell, Bernice, Leonard, and Geraldine. He is survived by his son Darryl (Linda); daughter Trina Reaves (Edmund); seven grandchildren; four great-grandchildren; and a host of family and friends.