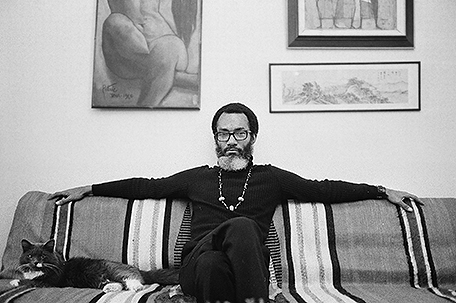 ABOVE PHOTO:  In this photo taken in1973, poet and novelist Sam Greenlee poses for a photo in Chicago. Greenlee, who was best known for his 1969 novel “The Spook Who Sat by the Door,” later adapted into a political drama movie, died Monday, May 19, 2014, in Chicago. He was 83.  (AP Photo/Sun-Times Media)

CHICAGO — Poet and novelist Sam Greenlee has died in Chicago at the age of 83.

Greenlee was best known for his 1969 novel “The Spook Who Sat by the Door,” later adapted into a political drama movie. Close friend and cast member in the movie, Pemon Rami, says Greenlee died early Monday.

Greenlee was one of the first African Americans to join the U.S. foreign service. From 1957-1965, he worked for the U.S. Information Agency, serving in Iraq, Pakistan, Indonesia and Greece.

“The Spook Who Sat by the Door” tells the story of a black CIA agent who becomes a revolutionary training young Chicago blacks for a violent rebellion. His other works include “Baghdad Blues,” in which he describes witnessing the 1958 revolution that brought down Iraq’s British-backed monarchy.