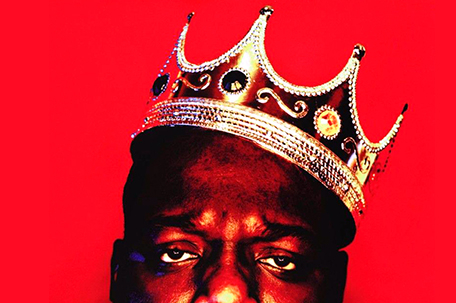 A crown adorned with plastic jewels, famously worn by Notorious B.I.G. during his last ever photo shoot, sold for $594,750 at Sotheby’s in New York on last Tuesday evening.

The crown was among a sizable collection of hip hop memorabilia auctioned off by Sotheby’s in a sale dedicated to the genre’s “history and cultural impact.”

Other lots included a five-piece drum kit, once used by Questlove of The Roots, and one of rapper Slick Rick’s diamond eyepatches, which sold for $30,240 and $25,200 respectively. A pair of “Push It” Jackets worn by hip hop duo Salt-N-Pepa in a 2015 Super Bowl commercial went for just under $24,000.

Elsewhere, a collection of letters written by a teenage Tupac Shakur to a fellow student at the Baltimore School for the Arts also went under the hammer. Described by the auction house as “incredibly sweet and at times steamy,” the hand-written correspondence sold for $75,600.

In a press statement released prior to the sale, vice president of Sotheby’s books and manuscripts department, Cassandra Hatton, said that Biggie’s crown and Tupac’s love letters offered and “introspective look, in their own way, at the personalities behind their respective public personas.”

An archive of twenty-two love letters from Tupac Shakur to a high school sweetheart are displayed during a preview at Sotheby’s for their Inaugural HIP HOP Auction on September 12, 2020 in New York City.

“Since its birth in the Bronx in the 1970s, hip hop has become a global cultural force, whose massive influence continues to shape all realms of culture: music, fashion, design, art, film, social attitudes, language and more,” she is quoted as saying. “This sale is a celebration of the origins and early eras of that influence.”

The crown once worn by Notorious B.I.G. was put up for sale by photographer Barron Claiborne, who had kept the item since styling the rapper as the “King of New York” in a photo shoot for Rap Pages magazine. Having acquired two crowns, Claiborne found that both were too small for Biggie’s head, though he was able to use one by removing its foam cushioning.

Sean “Diddy” Combs, who owned Biggie’s label Bad Boy Records, was also present at the 1997 shoot. According to Sotheby’s, Combs at the time expressed concerns that the photos would make the rapper look like “the Burger King.”

The shoot went ahead nonetheless, and the resulting photos became some of hip hop’s most recognizable and enduring portraits. In a press statement released through Sotheby’s, Claiborne described the crown as an “iconic piece of hip hop history.”

“With the tragic events that unfolded just days after the photoshoot, this image of a crowned Notorious B.I.G. became much more than a portrait — the image transformed Biggie Smalls into an aristocratic or saint like figure, forever immortalized as not only the King of New York, but a king of hip hop music and one of the greatest artists of all time,” the photographer said.

Tuesday’s auction also featured various hip hop-inspired luxury goods and contemporary artworks. A collection of 1980s and 1990s boomboxes, turned into an art installation titled “The Wall of Boom” by DJ Ross One, was one of the evening’s biggest sellers, going for over $113,000.

Also, among the 120 lots were a number of “experiences,” including virtual wine tasting with Big Daddy Kane and a private styling session with Harlem fashion designer Dapper Dan.

A portion of proceeds from the sale will be donated to charities including New York’s Queens Public Library Foundation, which coordinates hip hop community programs.