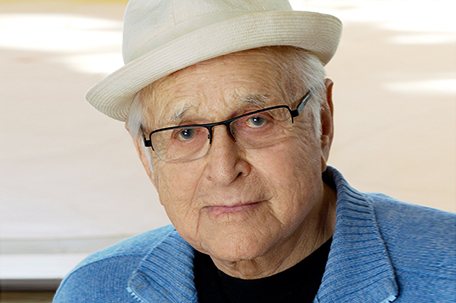 Norman Lear has enjoyed a long career in television and film, and as a political and social activist and philanthropist. He began his television writing career in 1950 when he and his partner, Ed Simmons, were signed to write for The Ford Star Revue, starring Jack Haley.

After only four shows, they were hired by Jerry Lewis to write for him and Dean Martin on “The Colgate Comedy Hour,” where they worked until the end of 1953. They then spent a couple years on “The Martha Raye Show,” after which Norman worked on his own for “The Tennessee Ernie Ford Show” and “The George Gobel Show.”

In 1958, he teamed with director Bud Yorkin to form Tandem Productions. Together they produced several feature films, with Norman taking on roles as executive producer, writer and director. He was nominated for an Academy Award in 1967 for his script for “Divorce American Style.”

In 1970, CBS signed with Tandem to produce “All in the Family,” which first aired on January 12, 1971, and ran for nine seasons. It earned four Emmy Awards for Best Comedy series, as well as the Peabody Award in 1977. “All in the Family” was followed by a succession of other television hit shows, including “Maude,” “Sanford and Son,” “Good Times,” “The Jeffersons,” “One Day at a Time” and “Mary Hartman, Mary Hartman.”

Concerned about the growing influence of radical religious evangelists, Norman decided to leave television in 1980 and formed People for the American Way, a non-profit organization designed to speak out for Bill of Rights guarantees and to monitor violations of constitutional freedoms. He has also founded other nonprofit organizations, including the Business Enterprise Trust, which spotlighted exemplary social innovations in American business, and the Norman Lear Center at the USC Annenberg School for Communication, a multidisciplinary research and public policy center dedicated to exploring the convergence of entertainment, commerce and society. In addition, he and his wife, Lyn, co-founded the Environmental Media Association to mobilize the entertainment industry to become more environmentally responsible.

In 1999, President Bill Clinton bestowed the National Medal of Arts on Norman, noting that “Norman Lear has held up a mirror to American society and changed the way we look at it.” He also has the distinction of being among the first seven television pioneers inducted in 1984 into the Television Academy Hall of Fame.

In 2001, Lyn and Norman Lear purchased one of the few surviving original copies of the Declaration of Independence, and shared it with the American people by touring it to all 50 states. As part of this “Declaration of Independence Road Trip,” Lear launched Declare Yourself, a nonpartisan youth voter initiative that registered well over four million new young voters in the 2004, 2006 and 2008 elections.

Lear’s memoir, “Even This I Get to Experience”, was published in October, 2014 by Penguin Press. At 94 years old, he just may be one of the oldest working executive producers in television.

He and his wife, Lyn, reside in Los Angeles, California. He has six children — Ellen, Kate, Maggie, Benjamin, Brianna and Madeline — and four grandchildren: Daniel, Noah, Griffin and Zoe. Here, he talks about Norman Lear: Just Another Version of You, the first documentary about him.

The biopic premiered nationwide Tuesday, October 25 at 9 p.m. on PBS (check local listings). In addition, PBS Distribution will release the film on Blu-ray, DVD and Digital HD on the same day, with additional bonus features.

Kam Williams: Hello, Mr. Lear. Thanks for the interview. I’m so honored to have this opportunity to speak with you.

KW: I have to start by asking you how did you come up with Archie Bunker, and what made you think America would be ready for him?

NL: Well, it wasn’t all that hard in that fixtures like that were up and down the street, and across the street from one another. It wasn’t like I didn’t hear my friend’s father, or even a little bit of it in my own father. There just wasn’t anything creating the character. He seemed to be ordinary American, very apparent in lots of places. [Chuckles]

KW: You grew up in Connecticut, but Archie’s from Queens. How did you come to develop a knack for that New York sensibility?

NL: I used to go into the city often on the New York/New Haven/Hartford Railroad. As we slipped into 125th Street, you felt like you could reach out and touch the tenements on your left. They were so close. That was largely Black family life. I used to look at all that and wonder what they were going through. I’d see a woman and wonder what was her favorite drawer, and what was in it. I kind of related to all of that.

KW: What was it like to enjoy such phenomenal success? At one point in the 70s, 6 of the top 10 shows in the ratings were yours.

NL: [Laughs] When you’re doing it, Kam, that’s what you’re doing. We didn’t stop to think, “Oh, boy, are we winning here!” It was more a question of how the heck do we work out the next story. There was always another story to break in, another character to get right, and another actor complaining. We were just working our tails off. So, we were less aware of what was building as the next day’s needs.

KW: Even though “Good Times” was a huge hit, one of its stars, John Amos, became upset about the image of his and other Black characters on the show. How surprised were you by his protests?

NL: Well, his sensitivity was understandable, but the behavior wasn’t always. [Chuckles] I’m pretty sure we killed off his character [James Evans], because we just couldn’t handle the behavior anymore. He wasn’t a violent man, and we didn’t think he was going to hurt anybody, but he talked in this film like he was going to hurt somebody. He admits to playing that role off-camera, when he says that.

KW: Another groundbreaking show of yours was “The Jeffersons,” which not only revolved around a happily-married, successful black businessmen, but featured an interracial couple who weren’t tragic figures.

NL: Yes, and the idea was to talk about it. And I’d say the same thing today. “Let’s talk about it!” We have such racial problems in our America at the moment, and we’re still not talking about them.

KW: What do you think of this era of political correctness where, even on college campuses, it seems people fear a free and open exchange of ideas?

NL: I think it’s terrible, and your finger is right on the pulse. We’re deliberately not talking. We turn away, and that’s the way we build the animus. The animus comes from not talking to each other and not talking about the subject.

KW: As a free speech advocate, how do you feel about San Francisco 49ers quarterback Colin Kaepernick’s refusal to stand for the National Anthem?

KW: How do you think a character as outrageous as Archie Bunker would be received today?

NL: You’ve got one running for the presidency.

KW: Which of your shows was your favorite?

NL: Whichever one I was waking up to that particular morning was my favorite.

KW: You’re a strong supporter of the Iran Nuclear Deal. Do you have any concerns about whether it will keep up its half of the bargain?

NL: I guess I have to be concerned. I assume that we were smart enough to come up with some means of verifying.

KW: What about the fact that Israeli Prime Minister Benjamin Netanyahu is so vehemently against the pact?

NL: I am vehemently against Bibi Netanyahu.So, that’s fine for me. [Laughs] I expect him to be against anything I care about.

KW: Were you bar mitzvahed, and was there a meaningful, spiritual component to your childhood?

NL: I was bar mitzvahed, but I didn’t have a meaningful, religious childhood, but it certainly was meaningful, culturally. I’m not a very religious Jew, and I wouldn’t be a religious anything. But I’m deeply spiritual, and deeply culturally Jewish. 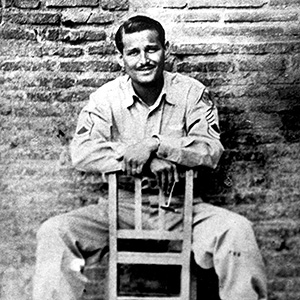 Norman Lear during his army days.

NL: I have music in my dressing room. It’s playing all the time, usually a Frank Sinatra station. I love dancing. I used to dance a lot. When I’m undressing at night, suddenly I’m nude, and there’s a full-length mirror in front of me. And I dance! I’m not pleased by what I’m looking at, but I’m certainly amused, and I have a wonderful time dancing naked. [LOL] Now, with all the science in the world, there isn’t any proof that dancing naked in front of a mirror isn’t the secret to longevity. True?

NL: That’s the kind of thing I do to laugh.

KW: I get it. What advice do you have for anyone who wants to follow in your footsteps?

NL: If they want to follow in my footsteps in the sense that they want to enjoy life, then I’d say it’s important to live in the moment. But it’s important to think about what that means, because “living in the moment” is an easy expression. But when you think about something being over, it’s over, and we’re on to the next. and if there were a hammock between over and next, that would be what’s meant by living in the moment. The fact of my life, and the fact of your life, too, and this conversation, Kam, you have lived every split second of your life just to be speaking with me right now. And I have lived a lot longer, but every second of it was on the way to getting to this conversation. So, whatever the moment is, it is effing important!

KW: I appreciate your sharing that sentiment. I always strive to relate on a super-conscious dimension myself.

NL: I hear that in this conversation and certainly get that level of spiritual essence.

KW: Thanks. Finally, what’s in your wallet?

NL: I carry around a picture I adore of my collected family. We have a place in Vermont where we all just gathered over Labor Day weekend. And we’ll be together again at Thanksgiving, and again at Christmas. So, any connection, in this case a photograph of my family in my wallet, is a treasure.

KW: Thanks again for the time, Norman, and best of luck with all your endeavors.

NL: Good to know you, Kam. I appreciate you and what you’re doing, and I look forward to seeing the article.

Kevin Costner–Oscar-winner reflects on life, career and his latest film