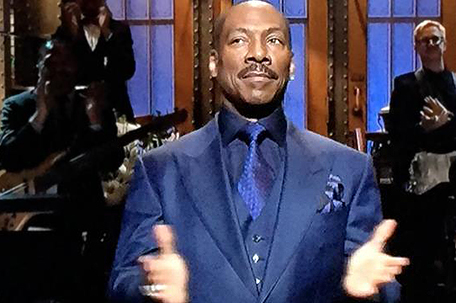 Eddie Murphy’s return to “Saturday Night Live” for the show’s 40th anniversary special last weekend was supposed to be punctuated by him playing Bill Cosby in a “Celebrity Jeopardy” sketch, but the comedian refused to do so, according to his friend and former cast member Norm Macdonald.

On Wednesday night, Macdonald sent out a flurry of tweets, offering behind-the-scenes info about the anniversary special, which drew more than 23 million viewers when it aired live on NBC Sunday night. Macdonald credits writer Steve Higgins for coming up with the idea of having Bill Cosby appear in a Video Daily Double in the category “Potent Potables,” holding a cocktail shaker and making a reference to mixing his favorite drink. The joke was that the appearance had been taped six months ago and, in light of the numerous allegations against Cosby, Alec Trebek (as played by Will Ferrell) hastily cuts off the video clip.

Macdonald says he was tasked with getting Murphy, who initially said he felt “uncomfortable” with the idea, to agree to the sketch. “I was dead sure Eddie would do it. Most others were not,” he tweeted. “We talk in his dressing room a good hour. When it’s over, I’m convinced he’ll do it.” Murphy would not ‘kick a man when he’s down.”

In the end, Kenan Thompson played Cosby and the audience was none the wiser. Murphy’s appearance consisted of him walking onto the stage to raucous applause, saying a few words of thanks and tossing to a commercial.