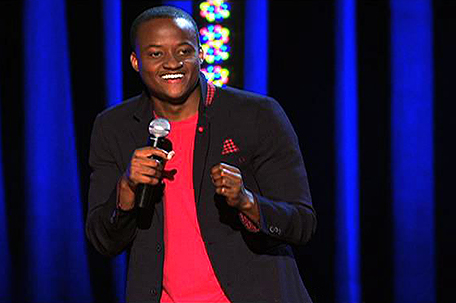 Los Angeles –Comedian Nore Davis will headline his very own one-hour special as part of Bounce TV’s popular, family-friendly original comedy series “Off The Chain.” “Off The Chain: Nore Davis” world premieres Tuesday, July 14 at 9/8pm CT. “Off The Chain” features some of the most hilarious African-American comedians on the stand-up scene. For season three, Bounce TV turned over the microphone to one comic per show, expanding to an hour-long format.   As a result of the series’ tremendous viewership and enthusiastic audience response, Bounce TV recently announced that “Off The Chain” has been renewed for a fourth season, set to debut in 2016.

Baby-faced Davis gives an energetic performance while making light of everyday topics and scenarios that play to a broad audience, but may particularly resonate with millennials. He covers everything from his youthful appearance, college life and the resulting debt, to childhood friends, texting and driving, moving from the ‘hood to the suburbs, interracial dating and more in an hour-long set full of comical observations.

Davis’ recent credits include appearances on such popular hit series such as Comedy Central’s “Inside Amy Schumer” and “The Ruckus” and HBO’s “Boardwalk Empire.” He has also appeared on popular MTV shows such as “Yo Momma” and “Nick Cannon presents: HATIN” and “Kiss & Tell: The Do’s & Dont’s of Dating.”

The third season premiere of “Off  The Chain” – headlined by Actress/Comedienne Kim Coles – was seen by more than 1.7 million people during its premiere week. Other top comedians featured this season include Rodney Perry, Cocoa Brown, Michael Colyar and Rudy Rush among others.