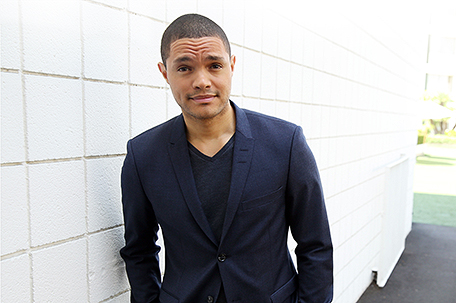 “The show’s writers and producers are “easing him in… Noah looks at ease, which is large part of making it work.”  –CNN’s Bill Carter

“Trevor Noah can host the ‘Daily Show’ you’re used to and not burn it to the ground,’ and it worked.”  –New York Times

“Jon Stewart’s successor Trevor Noah knocked his first episode of The Daily Show out the park last night by “continuing the war on bullsh” with mentions of Pope Francis, John Boehner, and everything in between.”  –News One

“For now, anyway, it doesn’t look like anything here is cause to make that globe suddenly spin off its axis.”  –Variety

NEW YORK — South African comic Trevor Noah moved in at “The Daily Show” on Monday, promising he’d try not to make predecessor Jon Stewart seem like a “crazy old dude who left his inheritance to some random kid from Africa.”

Noah took over as host after Stewart decided that 16 years of lampooning politics and the media – or half of the 31-year-old Noah’s life span – was enough and stepped down in August. Despite a new desk and set, Noah retained much of Stewart’s staff, the show’s theme music and format, down to a closing “moment of zen.”

He quickly paid tribute to Stewart, saying he was “more than just a late-night host.

“He was often our voice, our refuge and in many ways our political dad,” Noah said. “And it’s weird because dad has left and now it feels like the family has a new stepdad – and he’s black.”

He said Comedy Central offered the hosting job to a woman and to Americans, but were turned down.

“Once more a job Americans rejected is now being done by an immigrant,” he said.

Noah moved into comedic riffs on current events – Pope Francis’ visit to the United States, the resignation of House Speaker John Boehner and the discovery of water on Mars – and even smartly pulled some of them together. He said the Mars discovery gives us “a new planet to colonize, just when we find out that Volkswagen has been destroying the Earth.”

One key difference was a more liberal censor. An expletive that in Stewart’s day would have been bleeped out was clearly heard a few times.

Comedy Central worked hard to bring viewers to Noah’s debut. The show was simulcast across several Viacom networks, including MTV, VH1, BET and Nick at Nite – a tactic recently used to boost the ratings of MTV’s Video Music Awards. Comedy Central preceded the show with a Kevin Hart stand-up special, with frequent onscreen reminders that the white-hot comedy star was Noah’s first guest.

Hart handed Noah a present of a couple of neckties before the two began a somewhat caffeinated conversation.

Noah’s debut continues a period of transition in the hotly competitive late-night television arena. Stewart’s former compatriot, Stephen Colbert, has moved to CBS to replace David Letterman. Jimmy Fallon, only a year and half into the job at NBC’s “Tonight” show, generally leads in the ratings. James Corden, Seth Meyers and Larry Wilmore also are new at their programs.

Noah’s first talk with one of the show’s correspondents, ostensibly about Boehner’s exit and who would fill the job, was cleverly turned inward, into a routine about the mystery surrounding how a new guy would do in a big job.

“I only hope that the new speaker of the House knows that certain people are depending on him,” correspondent Jordan Klapper said. “I just bought a new condo.”