‘No joke’: Initial rounds of National Spelling Bee get tough 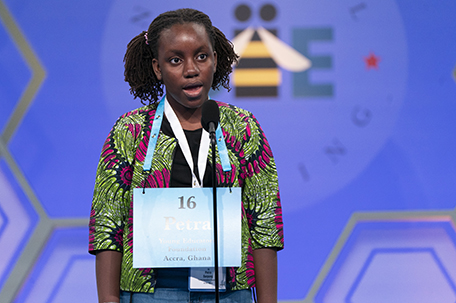 OXON HILL, Md. — One speller ran off the stage in the middle of her time at the microphone, saying she needed to pee. Another tried to walk back to her seat after spelling her first word correctly, only to be reminded she had a vocabulary word next. During one particularly brutal stretch, 10 consecutive spellers heard the bell that signals elimination.

The Scripps National Spelling Bee used to begin with a handshake. Now it starts with a slap to the face.

Leaner and meaner in its post-pandemic iteration, the bee returned to its usual venue on Tuesday for the first time in three years, and spellers were greeted with a new preliminary-round format that gave them no time to get comfortable.

“The prelims is no joke. Every stage of the bee is so important,” said Dhroov Bharatia, a 13-year-old from Plano, Texas, who finished fourth last year.

In years past, the early onstage spelling rounds did little beyond weeding out the weakest or most nervous spellers. The real action was a written test that determined who would make the cut for the semifinals.

But during last year’s mostly virtual bee, the bee’s new executive director eliminated the test, and that structure continued as 229 spellers took the stage for this year’s fully-in-person competition. Eighty-eight of those spellers advanced to Wednesday’s quarterfinals, a success rate of 38%.

Spellers had to get through three words in one turn at the microphone to continue in the bee. First, they were given a word from a provided list of 4,000 — more than twice as many as in years past. Then, they had to answer a multiple-choice vocabulary question about a word on the same list. Finally, they had to spell a word that could be found anywhere in Webster’s Unabridged dictionary.

Annie-Lois Acheampong, one of three spellers from Ghana, didn’t get that far in her first try. She labored successfully through her first word, “coulrophobia” — fear of clowns — and then was asked to define “edamame.” She smiled initially, but when she crossed her legs and couldn’t stand still, it was clear something else was going on.

She scurried off the stage before she got an answer from the stunned judges, who paused the competition and conferred about how to handle the situation.

“That was a first,” head judge Mary Brooks, who’s been involved with the bee for 50 years, said later.

The judges ultimately decided to let Annie-Lois return after the day’s last scheduled speller. She got her substitute vocabulary word right but faltered on the spelling of “apery” to conclude the day’s action. Although Annie-Lois could have been eliminated for exceeding the 30-second time limit for the earlier vocabulary question, Brooks said the speller’s clock was paused because she was experiencing a legitimate emergency.

There is precedent for pausing the clock during what Brooks called “extenuating circumstances,” notably in 2004 when Akshay Buddiga fainted on stage but recovered to finish in second place.

Braydon Syx of West Blocton, Alabama, might not get that far, but his time in front of the microphone on Tuesday encapsulated the newly riveting drama of the early rounds.

The 13-year-old seventh grader took his first plane ride to compete in this year’s bee. Braydon’s first word was “ormolu” — a gold-colored alloy of copper, zinc and sometimes tin. He spelled out “O-R-M” and then took a long, excruciating pause before spitting out the final three letters. He stretched his arms out to his sides after identifying the definition of the word “tremulous” — not a bad description of his demeanor at the microphone.

“It was really scary,” Braydon said, “but I also felt really happy at the same time. It was a weird feeling.”

Then came “bromegrass” — any grass of a large genus of grasses native to temperate regions. Something about the word was bothering him.

“Can you say it again another time?”

He took a deep breath. “Can you say it one more time?”

Afterward, Braydon explained his dilemma: “On ‘bromegrass,’ I didn’t know whether he was pronouncing it with an ‘m’ or an ‘n.’”

Still, through some combination of hard work, luck and perseverance, Braydon will spell again on Wednesday.

Akira Harris won’t be so fortunate. The eighth grader from a Department of Defense middle school in Stuttgart, Germany, began by spelling “redingote” correctly, then turned around and headed for her seat.

“Akira, we need you for your word meaning round,” a judge told her.

She stood silently, looking miserable, after she was given three potential definitions for the word “bandicoot.” She made a guess — “A?” — before she was told she had to read the multiple-choice answer under that letter, which was wrong.

Akira returned to the audience and buried her head in her mother’s shoulder. Once her group of spellers was finished, Akira made another beeline — this time for the exits.