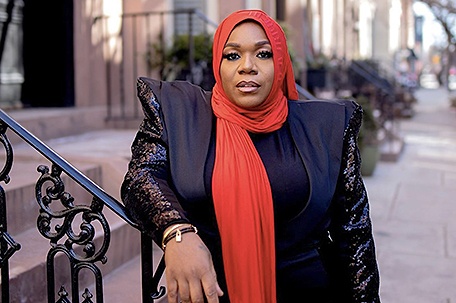 In 2013, Philadelphia native Niddarah Winters was given the idea to start a clothing line. Initially, that line began with t-shirts only. After learning more about the clothing industry, she reimagined the line and began using an article of clothing that had more of a personal meaning as her canvas.

As a Muslim woman who wears head coverings, Winters shifted her focus to shylas. That shift sparked a second birth for what is now known as Hijabified Clothing. Winters spoke with the SUN about her experience as an entrepreneur, the importance of not giving up, and her gratitude for the support Hijabified continues to receive.

The Hijabified line began with a concept and the creation of the word “hijabified.”

“The meaning for Hijabified is stylishly covered”, Winters explained.

When Winters began her t-shirt line, it was not a success. Thankfully, she didn’t let those initial hard lessons act as a deterrent against pushing forward with Hijabified Clothing.

“When I started with the t-shirts in 2013, I really got discouraged and thought maybe this is not what I’m supposed to be doing, because it’s not working,” Winters said. “I took a break and I relaunched about a year or two later, but I never quit, and I never gave up, no matter how much I wanted to. My clothing line really took off when I started to make shylas.”

After beginning the process of designing the shylas, Hijabified Clothing began seeing a great deal of success.

“Once I came up with the head wraps, I think that’s what attracted all of the attention– I’m thinking because of the material of the shylas and the embroidery on it because it’s identifiable,” Winters said.

Initially the shylas that Winters used were jersey material that had prints of her Hijabified logo. Eventually, she began looking for a manufacturer to get her logo embroidered on the material. She was able to find an Islamic manufacturer via Instagram to collaborate with and bring her vision to life.

“People were so amazed by the first sample I had made,” she said. “People were actually wearing the old ones when it was just the print, but once I got these made, it was an upgrade. Once I got that first sample, I fell in love with it… I felt like ‘this is it.’”

Since the revamp of Hijabified Clothing, Winters has been able to reach a number of Muslim celebrities through the power of social media. She expressed her gratitude for the support that she’s received while making her dream a reality.

“I still don’t believe it,” she said. “Now, I’m starting to see so many different people in my clothes and I get this feeling like… I can’t believe people are wearing something that I made up. It makes you all look so pretty — it’s such a great feeling, I can’t even explain it.”

Not only does Winters continue to build the brand, adding a multitude of colors (150 plus) and prints, she continues to expand with the Hijabified storefront that recently opened.

“I had a showroom inside of this building which I opened last year on August 23,” she said. “This year, on August 23, we expanded from the showroom to an actual storefront on Germantown Avenue. Coming from my living room to walking into the storefront every day is unreal… I’m so excited!”

To support Niddarah Winters and Hijabified Clothing online, visit: www.hijabifiedclothing.com, where you can purchase shylas, over garments, dresses, tunics for men and more. The Hijabified store front is located at 2563 Germantown Avenue. Business hours are Wednesday through Saturday 12-6pm. Be sure to follow Niddarah on Instagram for updates @hijabified_na.