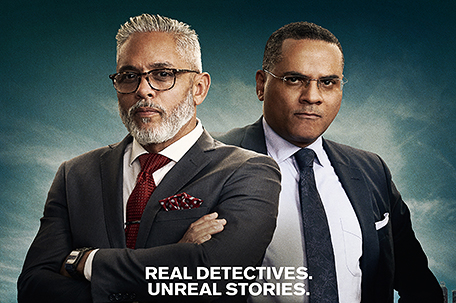 Veteran homicide detectives David Quinn and Vince Velazquez of Atlanta PD have stories — and they’re sharing some of the grittiest of them all on TV One’s new addition to “True Crime Mondays,” ‘ATL Homicide’. Premiering on July 9 at 10PM ET/9C, the compelling true crime series will drop viewers smack dab in the middle of real-life murder investigations with heavy recreation and narration from the detectives themselves.

On the premiere episode of  ‘ATL Homicide,’ when single mother Tereon Grant is stabbed to death in the middle of the night in August 2013, all signs point to her ex-boyfriend being the killer.

As the evidence stacks up, it looks like the case is closed, but when a gut feeling pushes detectives Quinn and Velazquez to dig deeper into the investigation, they uncover that Tereon has a dark secret. Now the detectives must delve into the Atlanta underbelly in an effort to uncover the truth.

‘ATL Homicide’ is flipping the true crime genre on its head. Each one-hour episode will focus on one dramatic murder case told in heavy re-creation. The audience will have a front seat to the action – as if it’s happening in the moment – following two of Atlanta’s most decorated homicide detectives as if they were on the case in their prime.

The show is hip, young and active, blurring the lines between standard interviews interspersed with re-creations, to something more compelling so that the audience is immersed in the action and seeing the story unfold through the eyes of the actors playing the roles of our two veteran cops. ‘ATL Homicide’ is produced for TV One by Wide Net Productions and Jupiter Entertainment.

Connect with us at www.tvone.tv or on social media using the hashtags #ATLHOMICIDE and #REPRESENT.

TV One to premiere “Will To Live,” a new series chronicling odds-defying true stories of survival and courage, Sept. 18

The CW is developing a period crime drama series based on real-life Black detective, Samuel Marlowe