New this week: Lizzo, ‘Criminal Minds’ and ‘The Woman King’ 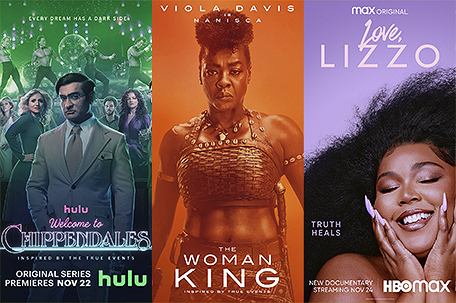 ABOVE PHOTOS: This combination of photos shows promotional art for “Welcome to Chippendales,” a series premiering Nov 22, left, “The Woman King,” available on VOD on Nov. 22, center, and “Love. Lizzo,” a film premiering Nov. 24 on HBO Max. (Hulu/Sony Pictures/HBO Max via AP)

Here’s a collection curated by The Associated Press’ entertainment journalists of what’s arriving on TV, streaming services and music and video game platforms this week.

— When the Mars Rover Opportunity, nicknamed Oppy, launched in 2003, it was only supposed to last 90 sols (or Mars days). But 15 years later it was still out there exploring. The documentary “Good Night Oppy,” coming to Prime Video on Wednesday, tells the story of not just Oppy and its counterpart Spirit, but the scientists and engineers who cared for the robots and their discoveries on Mars. With shades of some of cinema’s most lovable robots, from WALL-E to R2-D2, “Good Night Oppy,” directed by Ryan White, is sentimental and inspiring and a great film to watch with the family over the holiday.

— If you missed Viola Davis’s turn as an Agojie warrior in “The Woman King” in theaters, the Gina Prince-Bythewood epic will be available to rent on video on demand starting Tuesday. The $50 million action epic, set in 1820s West Africa, tells a story about the all-female army of the Kingdom of Dahomey in the vein of films like “Braveheart,” “The Last of the Mohicans” and “Gladiator.” It was a bit of a miracle that the film even got made at the budget it did, due to antiquated thinking in Hollywood, but Davis told the AP that the success of “Black Panther” was a turning point. And audiences did clearly want “The Woman King,” which has grossed over $91 million worldwide.

‘— A loner vampire gets a surprise when a teenager shows up claiming to be his daughter in “Blood Relatives,” a road trip comedy/horror coming to Shudder on Tuesday. It’s the directorial debut of actor Noah Segan, a mainstay of Rian Johnson’s films, who stars as well alongside Victoria Moroles, as the teenage Jane.

— Filmed over three years, during the “Cuz I Love You” tour, through the height of the pandemic and during the recording of “Special,” the new documentary “Love, Lizzo” is an intimate portrait of the superstar musician, with candid talk about bodies, self-love and being a Black woman. “Love, Lizzo” is streaming on HBO Max on Thursday.

— A series of concerts Tom Petty considered a highlight of his career get a new life when “Tom Petty and the Heartbreakers Live at the Fillmore” gets released on Friday. It will feature recordings from the band’s 20-concert residency at the Fillmore in San Francisco between Jan. 10 and Feb. 7, 1997. They played dozens of songs during the run and recorded six of the shows. Signature moments included a handful of guest appearances from the likes of Roger McGuinn, Bo Diddley and John Lee Hooker, as well as dozens of covers, including Bob Dylan’s “Knockin’ On Heaven’s Door” and The Rolling Stones’ “Time is On My Side.” In his review, AP’s Scott Bauer says, “It’s easy to hear the joy in Petty’s voice both in the songs and in the breezy on-stage banter.”

— Rapper Rakim will bring fans back to the Golden Age of hip-hop Monday as he returns to his album “Paid in Full” during a pay-per-view livestream concert from New York City’s Sony Hall on the ICONN Live App. Rakim is the latest artist to sign up for the series, a list that includes Ja Rule, Big Daddy Kane, and Raekwon. Released in 1987, “Paid in Full” had Rakim and Eric B. perform “Eric B. Is President,” “I Know You Got Soul” and “I Ain’t No Joke.”

— The risqué shows at Chippendale’s male strip clubs paled in comparison to the backstage melodrama created by the enterprise’s founder, Somen “Steve” Banerjee. The events, so steeped in greed and criminality that they’ve been recounted in movies, miniseries, and documentaries, gets another look in Hulu’s “Welcome to Chippendales.” Kumail Nanjiani leads the cast that includes Murray Bartlett, Juliette Lewis, and Annaleigh Ashford in the series debuting with two episodes on Tuesday.

— “Pitch Perfect” fans of the movies in general and Adam Devine’s Bumper, in particular, are in luck. Peacock’s “Pitch Perfect: Bumper in Berlin” finds the singer jumping at a chance to become a star in Germany with the help of Pieter Krämer’s Flula (from “Pitch Perfect 2”). Also along for the ride is Sarah Hyland, Devine’s castmate in their “Modern Family” days. The series will be out in full Wednesday on Peacock, with NBC viewers getting a taste of it when episode one airs Nov. 28.

— It’s almost criminal how much people love crime dramas. But because they do, and because franchises are a solid bet, here comes “Criminal Minds: Evolution” on Paramount+. Joe Mantegna, A.J. Cook, Kirsten Vangsness and Aisha Tyler are among those reprising their original “Criminal Minds” roles in the spinoff. The mission for the FBI elite criminal profilers: track down a network of serial killers formed during the pandemic. The series debuts with two episodes on Thursday as a Thanksgiving chaser.

— Look, you’re going to need some way to shake off the stuffing after that Thanksgiving feast. So why not throw an international dance party with friends from around the world? Ubisoft’s “Just Dance 2023” promises a new online mode that will let you boogie the pounds away with up to five other friends. This year’s version includes the usual mix of current hitmakers like BTS, Dua Lipa, Harry Styles and Doja Cat. There’s something for the geezers too: The party hasn’t started until Grandpa shows off his moves to The Trammps’ “Disco Inferno.” It’s available for the Nintendo Switch, PlayStation 5 and Xbox X/S.

— We’ve all grown up hearing about Wild West outlaws like Jesse James and Billy the Kid, but somehow the storytellers left out the real villains: vampires. Focus Entertainment and Polish studio Flying Wild Hog aim to correct that omission with “Evil West.” The varmints here are faster, meaner, and thirstier than any gunslinger you’d expect to meet in a dusty saloon. Fortunately, the heroes’ weapons — like a flamethrower and an electrified gauntlet — are more powerful than your standard six-shooter. “Evil West” moseys onto the PlayStation 5, PlayStation 4, Xbox X/S, Xbox One and PC on Tuesday.

Fall Preview: ‘The Woman King’ comes for the throne