New this week: ‘Jungle Cruise’ and music from Prince, Eilish 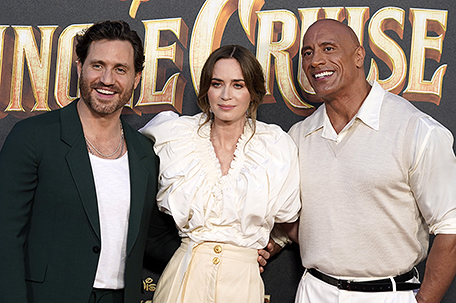 ABOVE PHOTO: From left, Edgar Ramirez, Emily Blunt and Dwayne Johnson, cast members in “Jungle Cruise,” pose together at the world premiere of the film, Saturday, July 24, 2021, at Disneyland in Anaheim, Calif. (AP Photo/Chris Pizzello)

Here’s a collection curated by The Associated Press’ entertainment journalists of what’s arriving on TV, streaming services and music platforms this week.

— Amusement park attractions don’t always make great movies, but Disney’s “Jungle Cruise” will hope its transition from Disneyland to screen goes more like “Pirates of the Caribbean” than “Tomorrowland.” Starring Dwayne Johnson as a riverboat captain and Emily Blunt as a scientist, “Jungle Cruise” is one of the splashier Hollywood spectacles to wade into the pandemic. Originally slated to be released last year, the Jaume Collet-Serra-directed PG-13-rated adventure will open simultaneously in theaters and on Disney+ for $30.

— One of the summer’s most delicious movie events is the neo-noir series running on the Criterion Channel. It’s a 26-film gallery of some best noirs that came well after the genre’s ‘40s and ’50s black-and-white heyday. If film noir captured the creeping shadows of postwar American life, later noirs resurrect similar moods of disillusionment for the decades that followed: new eras of despair for paranoid private eyes and deconstructed detectives. One standout, 1975’s “Night Moves,” by Arthur Penn and starring an electric, vicious Gene Hackman, was released within a year of Richard Nixon’s resignation. The cynicism is overwhelming and ferocious. The series’ entries span Ossie Davis’ “Cotton Comes to Harlem” (1970) to Rian Johnson’s “Brick” (2005) and include films like “The Long Goodbye,” “Chinatown,” “Body Heat” and “Blood Simple.”

— Jack Antonoff is one of music’s busiest men, producing and songwriting with the pop queens Taylor Swift, Lana Del Ray and Lorde, and he’s still managed to find time to put out another Bleachers album. His third album “Take the Sadness Out of Saturday Night,” includes a duet between Antonoff and fellow Garden State native Bruce Springsteen. On the song “Stop Making This Hurt,” Antonoff melds nostalgic ’80s new wave with a smashingly fun horn section over top lyrics about the pain of heartbreak.

— Prince may be gone but his music is definitely not. Five years after the music legend’s death, a studio album is set to be released Friday from the artist’s material. “Welcome 2 America” is Prince’s first posthumous release. Confronting themes of racial justice, equality, big tech and just what it means to be human, the 12-track album was recorded in 2010, but was abandoned. The title track has already been released, a loping, spacey funk song with spoken-word lyrics that feature a withering examination of America: “Land of the free/Home of the slave.”

— With a new look and a couple more Grammys on her shelf, anticipation is high for the follow-up to Billie Eilish’s instant hit debut record. “Happier Than Ever” is the second studio album from the 19-year-old superstar and is well stocked with 16 songs. With her whispering vocals and emotional lyrics on songs like “NDA” and “Therefore I Am,” the dark pop skills of Eilish and her artistic partner and brother Finneas O’Connell are sure to make this one a top album of the year.

— Robin Roberts is one busy broadcaster. The “Good Morning America” co-anchor who squeezed in a “Jeopardy!” guest host stint also made time for a four-episode series in which she engages an array of celebrities in conversation. “Turning the Tables with Robin Roberts,” debuting Wednesday on Disney+, promises “heartful and often humorous” back-and-forth between Roberts and guests including Debbie Allen, Jamie Lee Curtis, Mickey Guyton, Melissa Etheridge, Billie Jean King, Betsey Johnson, Tig Notaro and Raven-Symoné.

— More talk is ahead with “The Demi Lovato Show,” among the short-form series acquired by Roku from the short-lived Quibi service and previously unseen. Debuting Friday on the free, commercial-supported Roku Channel, the nine-episode series features Lovato’s interviews with guests including Olivia Munn, Jameela Jamil, Lucy Hale and Nikita Dragun. In a promotional video, Lovato called the show “a safe space for honesty and vulnerability.” The topics are deep — activism, gender identity and mental health among them — but the episodes are just 10 minutes each.

— Lily James of “Downton Abbey” is back in a period piece with a far different tone, Amazon’s three-episode “The Pursuit of Love.” James plays Linda who, with close cousin Fanny (Emily Beecham), dreams of a happily-ever-after. The friends’ paths diverge sharply in the comedy-drama set in England between World War I and II and based on Nancy Mitford’s 1945 novel. The other boldface name to know here: Emily Mortimer, who wrote and directed the miniseries greeted by U.K. critics as a witty romp with a modern edge. Mortimer (“The Newsroom”) also co-stars with Dominic West and Andrew Scott.

On a mission: Tom Cruise insists on social distancing on set