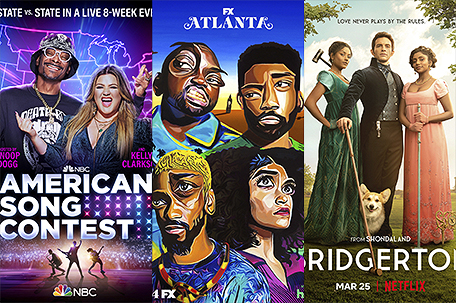 Here’s a collection curated by The Associated Press’ entertainment journalists of what’s arriving on TV, streaming services, and music platforms this week.

— Just in time for the Academy Awards, the Will Smith tennis drama “King Richard” arrives Thursday on HBO Max. Reinaldo Marcus Green’s film, which is nominated for six Oscars including best picture, first streamed for 30 days when it debuted simultaneously in theaters and HBO Max in November. But if you missed it then, it’s back now to help you with your Oscars prep in what’s likely to land Smith his first Academy Award. Smith’s portrayal of Richard Williams, father to Venus and Serena Williams, has been hailed as his most soulful and sensitive performance. Smith, whose co-stars include the also nominated Aunjanue Ellis, crafts an affectionate portrait of Williams as mentor to his five daughters in Compton, California. In her review, AP Film Writer Lindsey Bahr praised it as “inspiring, even if it’s not exactly inspired,” noting that “it doesn’t do too much glossy revisionism on behalf of its complicated and flawed central subject.”

— It didn’t catch on with the Oscars, but Fran Kranz’s wrenching chamber piece “Mass” (streaming Saturday on Hulu) shouldn’t be overlooked. The film brings together two sets of parents who meet cautiously and with still raw wounds, to talk six years after a school shooting that brought their families together. The four principal cast members — Ann Dowd, Reed Birney, Martha Plimpton, and Jason Isaacs — are all terrific in navigating anguished subjects that are rarely treated with this much empathy and sincerity. In my review, I praised “Mass” as “an intensely emotional dialogue of grief, regret and maybe catharsis, as performed brilliantly by a quartet of actors.”

— Maren Morris has no reason to be nervous this week despite the name of her latest single. The terrific “Nervous” is a genre-blurring tune with some alt-rock, pop and grunge rock along with country. It’s part of Friday’s release of the superstar’s “Humble Quest” album and Morris has said it chronicles her life as a new mom, lockdown and the death of her dear friend and collaborator, Michael Busbee, and more. The album is produced by super producer Greg Kurstin and the other strong singles include “Background Music” and the breezy “Circles Around This Town.”

— Pop punk is having a moment again and Machine Gun Kelly is very on brand with his new album, “Mainstream Sellout.” The 16-track album has contributions from Lil Wayne (twice), Willow, blackbear, Gunna, Young Thug, Bring Me the Horizon and Pete Davidson. One early single is “ay!” featuring Lil Wayne and a reminder of Machine Gun Kelly’s hip-hop roots. Another single — a blast of early 2000s called “emo girl” — features Willow and drummer Travis Barker. Fun fact: Machine Gun Kelly and Barker got matching tattoos of “born with horns,” which was to be the album’s name until MGK changed it.

— Donald Glover’s “Atlanta” goes far afield as it returns Thursday on FX for its long-awaited third season. The action takes place mostly in Europe, with music manager Earn (Glover), rapper Alfred aka Paper Boi (Brian Tyree Henry), Darius (LaKeith Stanfield) and Van (Zazie Beetz) on tour. The 10 episodes will be available on Hulu after debuting on FX, with past seasons also on the streaming service. Season two concluded in May 2018, but less patience will be required for the comedy’s fourth and final season: It’s already been shot and is set to arrive in the fall.

— With Daphne and the Duke embracing their happily-ever-after in season one of “Bridgerton,” the season-two focus is on the romantic fate of Daphne’s eldest brother, Lord Anthony (Jonathan Bailey). A lovely newcomer has caught his eye, but her protective sister is proving a threat on several fronts. Another key storyline: the queen is intent on unmasking the author of the gossip sheet bedeviling society. Viewers learned who is writing under the pen name Lady Whistledown last season, withheld here for those playing catch-up before the Netflix series returns Friday.

‘Atlanta’ to end with season 4; Donald Glover has no regrets