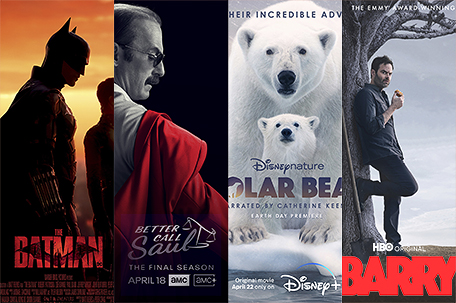 Here’s a collection curated by The Associated Press’ entertainment journalists of what’s arriving on TV, streaming services, and music platforms this week.

— “The Batman,” the biggest box-office hit so far this year, will promptly land Monday on HBO Max immediately following its 45-day run in theaters. As a response to the pandemic and a way to boost its streaming service, Warner Bros. last year premiered its films simultaneously in theaters and on HBO Max. This year, the studio’s new releases begin streaming after 45 days in theaters — or about half what the traditional theatrical window once was. “The Batman,” directed by Matt Reeves and starring Robert Pattinson as the Caped Crusader, showcases a relatively young Batman, new to vigilantism and struggling with its burdens. In my review, I called the three-hour film “a morose mood piece, soaked in shadow and rage, that has stripped the comic’s archetypes down to abstracted silhouettes and grubbily human characters.” Following its streaming debut, “The Batman” will also air on HBO on Saturday, April 23.

— “Navalny” is a bracing documentary portrait of one of Vladimir Putin’s fiercest and most vocal political foes in Russia. Alexei Navalny, the Russian opposition leader, is currently imprisoned. Last month, he was sentenced to nine years in jail after being found guilty of fraud in a case critics call politically motivated. “Navalny,” directed by Daniel Roher, was largely filmed in late 2020 and early 2021 while Navalny was recuperating in Germany after an attempted assassination with nerve agent poisoning. The film premieres on CNN and CNN+ on Sunday, April 24. (It will also stream on HBO Max at a later date.) In her review, AP Film Writer Lindsey Bahr said “Navalny” “has all the makings of a Hollywood thriller” and is “even more chilling and prescient” after Putin’s invasion of Ukraine.

— In the same month Bonnie Raitt’s “Nick of Time” was inducted into the National Recording Registry, the singer-songwriter proves she’s not slowing down by offering a new 10-track album, “Just Like That…” It’s her 21st LP and her first in over six years. The terrific first single is one of her grooviest, “Made Up Mind,” with slinky slide chords and bluesy riffs. Raitt produced the record herself, working alongside mixing engineer Ryan Freeland, who combined with Raitt to win a Grammy for best Americana album for their work on her 2012 effort, “Slipstream.”

— Brian May’s second solo album, 1998’s “Another World” was well received even if it didn’t set the charts on fire. So, on Friday, April 22, the guitarist and songwriter with rock group Queen is giving it another chance with a deluxe reissue. The set contains the remastered original album alongside a 15-track disc which offers unreleased remixes, rarities, live tracks, and cover versions, including his tribute version of Buddy Holly’s rock ‘n’ roll classic “Maybe Baby.”

— Barry Berkman is certain it’s the actor’s life for him and works hard at his craft — while clearing away obstacles posed by his previous career, hit man. As HBO’s dark comedy “Barry” returns for its pandemic-delayed third season, the Midwest transplant to Los Angeles looks inward to understand what made him a gun for hire. Bill Hader stars as the title character and co-created the Emmy-winning show airing Sunday, April 24, and streaming on HBO Max. Along for the ride: Henry Winkler as Barry’s former acting teacher and Sarah Goldberg as Barry’s girlfriend.

— “Better Call Saul” and its star, Bob Odenkirk, brilliantly carried on the legacy of “Breaking Bad,” but the time has come to say goodbye to the spinoff-prequel. Or more accurately, start a long farewell, with the show’s sixth and last season split into two. The first of seven episodes airs Monday, April 18, on AMC and AMC+, with the final six debuting July 11. It’s been a wait for fans of Saul Goodman, the eminently sketchy lawyer also known as Jimmy McGill, since season five ended in April 2020. There was a pandemic-caused production delay and, during this season’s taping, a health issue for Odenkirk that affected taping.

— “The Man Who Fell to Earth,” the 1976 film starring David Bowie and directed by Nicolas Roeg, was based on Walter Tevis’ eponymous novel. Both the film and the book are cited as inspiration for Showtime’s drama series of the same name. Chiwetel Ejiofor stars as the newly reworked alien character who arrives on Earth at “a turning point in human evolution.” Naomie Harris co-stars as a scientist who joins in the mission to save two worlds, with Bill Nighy, Jimmi Simpson, and Kate Mulgrew also in the mix. “The Man Who Fell to Earth,” created by “Star Trek” TV series veterans Alex Kurtzman and Jenny Lumet, debuts Sunday, April 24.