New promoter says Zimmerman fight back on… without DMX 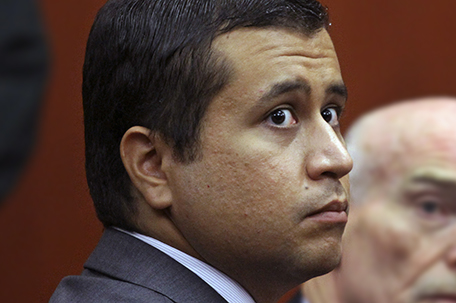 ABOVE PHOTO: In this June 29, 2012 file photo, George Zimmerman, left, and attorney Don West appear before Circuit Judge Kenneth R. Lester, Jr. during a bond hearing at the Seminole County Criminal Justice Center in Sanford, Fla. Zimmerman called police multiple times to report black men he thought were suspicious in his neighborhood in the months before he fatally shot an African-American teen, but both his ex-fiance and the lead detective investigating Trayvon Martin’s death didn’t regard the ex-neighborhood watch leader as racist, according to documents and recordings released Thursday, July 12, 2012 by prosecutors.

Just when you thought the spectacle of George Zimmerman putting on the boxing gloves to fight was over and done with, along comes news that the former neighborhood watch volunteer and child killer will still get in the ring.

The big difference is that rapper DMX will not be the one in the ring with Zimmerman. An online streaming service called FilmOn.com admitted to securing the rights to a possible Zimmerman fight.

The service vows to deliver what the public wants from the bout, which is blood. As for DMX’s non-involvement, FilmOn adds that the Ruff Ryder is out as Zimmerman’s challenger because “much bigger names than DMX” want in.

The new revelation comes after the bout’s original promoter, Damon Feldman, pulled out of the event because of threats made against his kids.

Speaking with TMZ, the owner of FilmOn, Alki David, said the new fight will no longer be a celebrity boxing match… “this is going to be like Fight Club … a very bloody event.” The date of the Zimmerman fight, Alki added, will be March 15 from a secret location. All profits from the event will go to the Trayvon Martin Foundation.

Despite the pending date, TMZ reports that FilmOn is still negotiating with Feldman for the rights and nothing has been signed at this time regarding the Zimmerman fight.

Yet, the site shared that Feldman was to reveal all at a scheduled news conference.

Iyanla tapes open letter to DMX after rapper curses her, has outburst on son