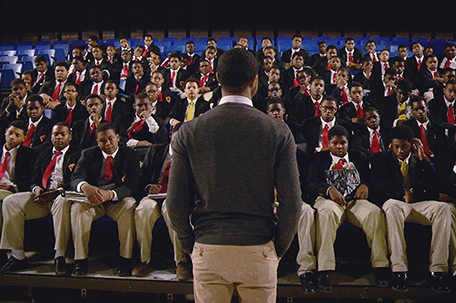 The largely invisible and often crushing struggles of young African American men come vividly – and heroically – to life in the new feature documentary, “All the Difference,” which traces the paths of two teens from the South Side of Chicago who dared to dream a seemingly impossible dream: to graduate from college. Robert Henderson and Krishaun Branch’s determination started them on the road to success, but it was the support from people in their lives – parents, grandparents, teachers and mentors – that brought them to their destination.

The first in their families to graduate from college, given the odds against them – the average high school graduation rate for black males in Chicago is 41 percent – their motivations are quintessential expressions of the American dream. “I just want to make a positive contribution to the society I live in,” says Robert, who was just 17 months old when his mother was killed by his father as he and his six siblings were taken in and raised by their grandmother. Meanwhile, Krishaun, who, like many of his family members, was part of a gang, hopes to become a U.S. Marshal.

Both also had a key asset: the Urban Prep Charter Academy for Young Men, where mentors and teachers encouraged them not only to get through high school but to go beyond. And while family stability has not been constant, what remains plays a crucial role.

Krishaun chooses historically black Fisk University in Nashville, while Robert decides on predominantly white Lake Forest College, about 30 miles north of Chicago. And in the end, despite the hurdles, Krishaun and Robert succeed. Their emotional graduation ceremonies illuminate the significance of their achievements. They have not only beaten the odds, but have positioned themselves for entry into the middle class. And both have made deliberate choices to take jobs that will allow them to give back to the community. While Robert and Krishaun are focused on the future, they have not forgotten where they came from. They offer advice to other young men who might dream of following in their footsteps.

Emmy-Award-winning producer/director Tod Lending’s film, inspired by Wes Moore’s bestselling autobiographical book, “The Other Wes Moore,” will have its national broadcast premiere on the POV (Point of View) documentary series, now in its 29th season, on PBS on Monday, Sept. 12, 2016 at 10 PM. (check local listings).

Lending, whose earlier work includes the Academy Award-nominated “Legacy” and the POV films “Omar & Pete,”and “The Principal Story,” documents five years of hard work, sacrifice, setbacks and uncertainty in pursuit of a future many Americans consider a birthright. “All the Difference” is a co-production of American Documentary | POV and is part of American Graduate: Let’s Make It Happen, a public media initiative made possible by the Corporation for Public Broadcasting to help local communities keep more students on the path to graduation, college and careers.

“It only takes one generation to dramatically change the destiny of a family, and when families change, communities change,” said director Tod Lending. “Robert and Krishaun exemplify that change. It’s important to remember that they made it to college not because they were academically exceptional. They made it because their mentors, teachers, academic advisers, family members and pastors believed in them and taught them to believe in themselves… If this type of very affordable support is made available to all young men growing up in the chaos and despair of poverty, we will see a whole new generation bring an end to that cycle of poverty. I think our country desperately needs to make this happen.”

Chicago’s Urban Prep does it again; every senior college bound