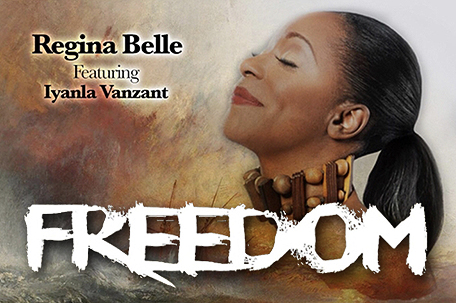 Regina Belle has been a staple in R&B, soul, and gospel music for many years. The songstress with the unique tone is known best for classics like “If I Could,” “Make It Like It Was,” and the Disney “Aladdin” classic and duet with Peabo Bryson, “A Whole New World.”

The dynamic singer and New Jersey native continues to wow audiences all over the world. With Belle’s powerful new single “Freedom,” upcoming performances on the 2020 Soul Train Cruise and a host of other endeavors, her fans will be delighted to know that she will continue to make her mark the music world. Belle sat down with the SUN to talk about longevity in the music industry, new music, and gratitude.

Belle has maintained an unwavering career and fan base for decades. She ascribes a great deal of her success and longevity to preparation and a strong support system.

“Having the opportunity to have some training through Columbia Records definitely played a part.” Belle said. “I would also attribute it to my all around training… being a musician and not just a singer. My grassroots training, my vocal training, being in church, having good parents who put some boundaries on me and didn’t allow me to do whatever I wanted to do when I got ready to do it, my village, my neighbors, some of my teachers, and overall I believe God had a hand on me over all these years, because He was setting me aside for something that I didn’t even know I was headed to.”

“Those kind of things played a major role in me being who I am today,” she continued. “I believe the music also played a large role because of my ability to focus in on what I love so much. I think it set me out of harm’s way for a lot of other things that could have come in my path.”

Unfortunately many of the artists today are unable to achieve the same longevity. There is a revolving door for new artists that are here today and gone tomorrow. Belle discussed some of the things she would like to change about the current state of the music industry as well as the importance of bridging the gap between old and new generations of musicians.

“One of the things I would change in music today is the relationship between industry and artists,” she said. “Berry Gordy was really revolutionary in how he approached the industry with artists and the relationship. He made it more like family, but then he made it a training ground so that no artist left the camp not knowing how to speak publicly, conduct themselves and how to dress. I mean it was an entire package with the artists. I would say some of that is missing.”

“I would also change the relationship between old jacks and new jacks,” she continued. “We have a plethora of information that is vital to new artists in terms of upkeep. Understanding what you do today is going to cost you, rather it be good or bad… that kind of priceless information is so important and being able to heed the call of your elders is so important.”

Belle addresses the importance of honoring those that came before us in her newest song “Freedom”. The single — which also features the voices of Iyanla Vanzant and Bishop Kenneth W. Paramore — is an ode to our ancestors. The song also addresses the current political climate in our country and how it impacts Black and Brown people. Belle shared the inspiration behind “Freedom.”

“The whole inspiration behind that is a thank you to the ancestors first of all,” she said. “All of those that paid dues and paid with their lives, or had their names compromised just so I could walk through the front doors of these establishments where I work. It’s also a question to today’s generation to say what are we prepared to do to make sure that the generations to come have it in a way that we have it… that it was easier for us. We didn’t have to go through everything they went through.”

“I have a 27-year-old son, and I find myself praying him back home, because of the climate in which we live now,” Belle added. “To a large degree, young African American males… it’s a war zone for them. I think at this point and time it really throws the question back to us… are we doing our job at the optimum level? The song “Freedom,” just kind of hits on the fact that we have an obligation, responsibility and an accountability to make sure that the generations to come have it better than what we have.”

Belle created the song “Freedom” eight years ago for a museum opening. She was in the studio with her longtime writing partner Chris Walker at the time, recording her second gospel record. Belle opened up about what it means to have this song resonate in the way that is has all these years later.

“Once the song came to fruition, I’ve gotten so many invitations to kind of use that song as the anthem for so many different movements. I’m really honored because it’s turned into more than what I even saw when I recorded it,” she said. “Fast forward up to now, the climate has gotten ridiculous… even more so. I think it was probably not so much different, but it’s the fact that with these camera phones, we see more now. More things are being brought to the light. It made me wince when we started going from Trayvon Martin to the next issue to the next. I said to Chris, ‘I don’t have time to do this as a hard copy, we’re going to do this as a digital download,’ and that’s exactly what we did.”

Belle is no stranger to inspiration. Her music has been a source of joy and inspiration for audiences all over the world. She also shared a very personal story about a time where she was encouraged by her own music.

“God is Good” was probably my most inspirational, even though I recorded the second album after that,” she said. ““God is Good” came at a time when I didn’t know what I was heading to concerning having a brain tumor. When I was down, that was kind of all that spoke to me in my spirit. It’s a scripture in the Bible where David is encouraging himself because he’s not getting it from the people around him; his boys were trying to kill him. He finds himself in a place where he has to talk to himself, encourage himself and tell himself who he is. In that time, I was going through such a rough period. When you’re in charge of 14 people, and you can’t put on a shirt by yourself, you can’t feed yourself… it’s a seriously humbling place to be. I had to still tell myself that what I was going through was for a purpose. I can’t see the other side of time, but I know I’m going to get there… so God is good. That whole album, “Love Forever Shines” really did a lot to inspire me.”

Belle is such an incredibly well-rounded artist that it is impossible for her to fit in just one category. Throughout her career, she has moved in and out of genres seamlessly. She offered her gratitude to her fans for allowing her to express herself through her music freely.

“In other words, I wouldn’t trade being me,” she said with a laugh. “That’s really an honor, because not everyone has the opportunity to do that as a musician.”

Regina Belle and Peabo Bryson made the world fall in love with “A Whole New World” in Disney’s “Aladdin.” Now a whole new generation is being reintroduced to the song and the film.

“I’m really sad that they didn’t call me back, but I’m happy for the new artists,” she said. “It’s a great time, and Disney is a wonderful platform. I have to say that doing that song changed my life. I haven’t had the opportunity to see the movie, but I’m a big fan of Will Smith, so I can’t wait to see it.”

Belle has accomplished so much during her incredible career, but there is still so much she is looking forward to doing. She shared some of what her fans can look forward to next.

“I would like to do a little bit more producing,” she said. “I’m loving being on that end of the spectrum and maybe not just myself. I want to go back to a little bit of acting. I really enjoyed the three B movies that I had a chance to do. And maybe working on this cookbook that I need to get out to let folks know I have another hand in another area of life. But it’s not for people who are dieting.”