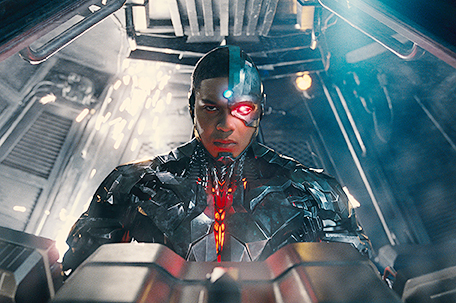 Fans of action-packed, comic book-based, superhero movies are about to have yet another reason to celebrate.

“Justice League” brings together some of the world’s most iconic comic book characters including Batman (Ben Affleck), Superman (Henry Cavill), Wonder Woman (Gal Gadot), Aquaman (Jason Momoa), The Flash (Ezra Miller), and Cyborg played by actor Ray Fisher in his breakout role, on a mission to save the planet.

The newest member of Justice League, Victor Stone aka Cyborg, brings a completely unique element of cool to the team. Originally created in 1980 by writer Marv Wolfman and artist George Pérez, Cyborg was originally part of the “Teen Titans.” In 2011, thanks to the DC Comics reboot “The New 52”, Cyborg was established as a founding member of  “TheJustice League.”

Fisher grew up not far from Philadelphia, just over the bridge in Lawnside, New Jersey and was introduced to acting during his sophomore year of high school via his English teacher. After seeing an audition posted for the play “Into The Woods,” Fisher auditioned, landed a role in the production, and his love affair with acting began. Upon graduating from high school, Fisher attended the American Musical and Dramatic Academy in New York and pounded the pavement, doing theater auditions for theatrical productions before landing a role in“Fetch Clay, Make Man”at the New York Theater Workshop in Lower Manhattan.

His portrayal of the legendary Muhammad Ali in this production became the role that set everything into motion on his path to becoming Cyborg.

“After I played Ali in New York, I ended up getting an agent and manager.” Fisher said. “They suggested I take a trip out to LA… this was in 2014. When I did, I met with some of the casting folks at Warner Bros. They said ‘Listen, we have this thing that may be right for you, but we can’t really tell you what it is”… everything was super shrouded in secrecy.”

“I put an audition on tape for our director Zack Snyder, and he gave me some notes,” Fisher continued. “I sent in another tape, and they brought me out to test in Detroit while they were shooting Batman v Superman. It just kind of went on from there. It was a really smooth process… eerily smooth I would say, very unlike what I assumed the Hollywood experience would be. I’m super fortunate that this is a character and a project that I was passionate about as a kid and I’m able to be as passionate about as an adult. It’s very strange. I feel like there’s some sort of cosmic force behind all of this.”

Landing the role of Cyborg allowed Fisher to work alongside his favorite childhood superhero, Batman. In addition to living out a childhood dream, Fisher took on a tremendous feat playing the dual role of Cyborg and Victor Stone. Victor Stone’s backstory stands alone as both tragic and triumphant in nature. Fisher offered a concise description of the character.

“First and foremost, Victor Stone is a young Black man with an IQ of 170,” he said. “He’s really into sports and becomes an all-star college quarterback. Through no fault of his own, he has a traumatic accident that threatens his life. In order to save him, his father uses alien technology that effectively turns him into a cyborg. Cyborg is connected to all things technological. He is comprised of a super sophisticated alien technology called mother box. He’s got super strength, he can fly, he’s got super durability, and he can transform his body parts into different weapons or tools depending on what he needs. His powers continue to evolve. He’s got powers that he doesn’t even know about just yet.”

“He’s lost his mother, his body, his entire life as he once knew it, all in one fell swoop,” Fisher added “So for him, a lot of his journey is rebuilding himself mentally… figuring out what it means to be human, figuring out how to sort of regain that humanity, figuring out how to rebuild a relationship with his father, and how to become a part of a team again.” 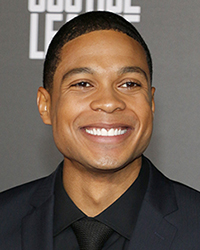 Being apart of a team of this caliber required a great deal of preparation for Fisher, who spoke about some of the challenges that came with portraying Cyborg.

“Well, for me the mental side was definitely more difficult than the physical,” he said “We had great trainers… Mark Twight and Stu Walton. They got me in prime fighting condition! I put on about 30 pounds of muscle to portray Victor Stone. I was 193 when we started, and I was at 224 pounds at my max during the shooting process. He’s a college quarterback, and there were some sequences we shot with him prior to his accident, so in order to convey that convincingly, I just had to work out like a madman.”

“On the mental side, there were a lot of similarities between Cyborg and myself,” Fisher added “His father was never really there for him mentally or emotionally, and for me when I grew up my pop wasn’t in the picture… so that was a connection I was able to draw between myself and the character. Mentally dealing with what he’s lost… he’s lost more than most people can imagine. So I sort of had to draw from my imaginative resources to try to assume what that would feel like. I had a lot of fun being able to delve into Victor and basically tried to figure out a way to not just focus on the trauma but how does one recover from that?”

In addition to taking on a multi-dimensional character with a troubled past, Ray Fisher is enriching history in more ways than one, adding to the stories of African-American heroes and heroes that are disabled. Fisher opened up about what he hopes this role will achieve.

“I hope it inspires people, I really do,” he said. “I hope it inspires them the same way that I was inspired by watching Wesley Snipes in‘Blade,’ and in the same way that all of these characters have the power to inspire. I also want to point out the fact that while Cyborg is a person of color, he also represents people who are differently abled in that he’s lost a lot of his body. I feel like that’s equally as important!”

“I think one of the beautiful things about the character in this comic iteration, is that he makes it a point to say “listen, this isn’t about Black or White necessarily. It’s about being human,” he continued. “That’s one of the things that sort of resonates and it transcends our basic understanding of skin color, body type, and what we see in a big way.”

With an extremely diverse cast of dynamic actors and a cult following, this film is sure to keep audiences on the edge of their seats. In the meantime, Fisher leaves the fans with this.

In a time where unity is needed more than ever, the heroes of “Justice League”are giving audiences a prime example of what working together for the greater good looks like.

Ray Fisher is sure to continue in line with playing iconic characters that audiences love. Follow his journey on social media @rehsifyar. This supercharged film is one you don’t want to miss!