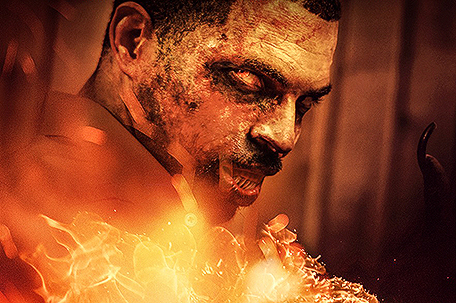 Indianapolis-based writer/producer/director Jamie Rhodes is pleased to announce the 2017 release of his latest project and first feature film — Night Of The Unspeakable (NOTU), a hip-hop horror and supernatural thriller.

NOTU is set in the confines of a rehearsal and recording studio. A rapper, his entourage, an R&B girl group, a Rock and Soul band, and a Spoken Word artist are trapped for one terrifying night with two seductive and deadly demons.

“I wanted to create a horror film fused with hip-hop music and culture, and execute it in a non-stereotypical manner. NOTU’s got drama, humor, seduction and it’s horrifying,” said Rhodes.

NOTU closely follows the Rhodes standard of delivering multi-layered storylines with unexpected twists – which has become expected of the writer’s brand since 25th Dynasty Press released his well received novel Prey, Messiah in 1998 and his acclaimed short film, Sebastian’s Pen, was released by Golden Boyz Productions in 2003.

“The best low budget indie horror I have seen in years,” exclaimed a Kindle Customer after purchasing and watching NOTU via Amazon.

Horror fans and supernatural thrill seekers may stream NOTU on their devices and Smart TVs, or may buy the DVD to own or gift, now, via Amazon: https://www.amazon.com/Night-Unspeakable-Dena-Toler/dp/B06ZZHMTX1.